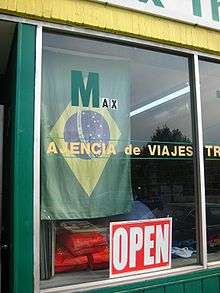 This travel agency in South Norwood, Massachusetts, United States employs Portuguese-speaking agents and displays the flag of Brazil in its store window.

A travel agency is a private retailer or public service that provides travel and tourism related services to the public on behalf of suppliers such as activities, airlines, car rentals, cruise lines, hotels, railways, travel insurance, and package tours. In addition to dealing with ordinary tourists most travel agencies have a separate department devoted to making travel arrangements for business travelers and some travel agencies specialize in commercial and business travel only. There are also travel agencies that serve as general sales agents for foreign travel companies, allowing them to have offices in countries other than where their headquarters are located. 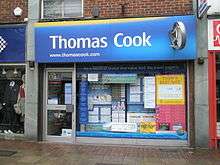 The modern travel agency first appeared in the second half of the 19th century. Thomas Cook established a chain of agencies in the last quarter of the 19th century, in association with the Midland Railway. They not only sold their own tours to the public, but in addition, represented other tour companies. Other British pioneer travel agencies were Dean & Dawson,[1] the Polytechnic Touring Association, and the Co-operative Wholesale Society. The oldest travel agency in the United States is Brownell Travel; on 4 July 1887, Walter T. Brownell led ten travelers on a European tour, setting sail from New York on the SS Devonia.[2]

Travel agencies became more commonplace with the development of commercial aviation, starting in the 1920s. Originally, travel agencies largely catered to middle and upper class customers, but the post-war boom in mass-market package holidays resulted in the proliferation of travel agencies on the main streets of most British towns, catering to a working class clientele looking for a convenient way to book overseas beach holidays.[3]

A travel agency's main function is to act as an agent, selling travel products and services on behalf of a supplier. Consequently, unlike other retail businesses, they do not keep a stock in hand, unless they have pre-booked hotel rooms and/or cabins on a cruise ship for a group travel event such as a wedding, honeymoon, or a group event. A package holiday or a ticket is not purchased from a supplier unless a customer requests that purchase. The holiday or ticket is supplied to the agency at a discount. The profit is therefore the difference between the advertised price which the customer pays and the discounted price at which it is supplied to the agent. This is known as the commission. In many countries, all individuals or companies that sell tickets are required to be licensed as a travel agent.

In some countries, airlines have stopped giving commissions to travel agencies. Therefore, travel agencies are now forced to charge a percentage premium or a standard flat fee, per sale. However, some companies pay travel agencies a set percentage for selling their product. Major tour companies can afford to do this, because if they were to sell a thousand trips at a cheaper rate, they would still come out better than if they sold a hundred trips at a higher rate. This process benefits both parties.[4] It is also cheaper to offer commissions to travel agents rather than engage in advertising and distribution campaigns without using agents.[5]

Other commercial operations are undertaken, especially by the larger chains. These can include the sale of in-house insurance, travel guide books, and public transport timetables, car rentals, and the services of an on-site bureau de change, dealing in the most popular holiday currencies.[6] 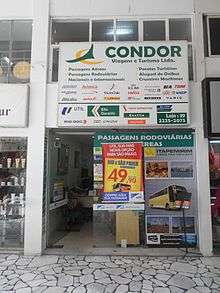 A travel agent is supposed to offer impartial travel advice to the customer, as well as coordinating travel details and assisting the customer in booking travel. However, this function almost disappeared with the mass market package holiday, and some agency chains seemed to develop a "holiday supermarket" concept, in which customers choose their holiday from brochures on racks and then book it from a counter. Again, a variety of social and economic changes have now contrived to bring this aspect to the fore once more, particularly with the advent of multiple, no-frills, low-cost airlines.

Traditionally, travel agencies' principal source of income was, and continues to be, commissions paid for bookings of car rentals, cruise lines, hotels, railways, sightseeing tours, tour operators, etc. A fixed percentage of the main element of the price is paid to the agent as a commission. Commissions may vary depending on the type of product and the supplier. Commissions are not paid on the tax component of the price. Travel agencies also receive a large variety of bonuses, benefits, and other incentives from travel and tourism related companies as inducements for travel agents to promote their products. The customer is normally not made aware of how much the travel agent is earning in commissions and other benefits. Other sources of income may include the sale of insurance, travel guide books, public transport timetables and money exchange.[7]

Since 1995, many airlines around the world and most airlines in the United States now do not pay any commission to travel agencies. In this case, an agency adds a service fee to the net price. Reduced commissions started in 1995 in the United States, with the introduction of a cap of $50 on return trips and $25 on one way.[8] In 1999, European airlines began eliminating or reducing commissions, while Singapore Airlines did so in parts of Asia.[8] In 2002, Delta Air Lines announced a zero-commission base for the U.S. and Canada; after a few months United Airlines, American Airlines, Continental Airlines, Northwest Airlines, US Airways and American Trans Air all followed suit.[8]

The majority of travel agents have felt the need to protect themselves and their clients against the possibilities of commercial failure, either their own or a supplier's. They will advertise the fact that they are surety bonded, meaning in the case of a failure, the customers are guaranteed either an equivalent holiday to that which they have lost or if they prefer, a refund. Many British and American agencies and tour operators are bonded with the International Air Transport Association (IATA),[9] for those who issue air tickets, Air Travel Organisers' Licensing (ATOL) for those who order tickets in, and the Association of British Travel Agents (ABTA) or the American Society of Travel Agents (ASTA), for those who sell package holidays on behalf of a tour company.[10] 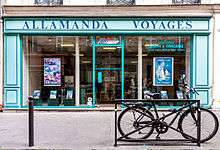 There are three different types of agencies in the UK: multiples, miniples,[11] and independent agencies. Multiples comprises a number of national chains, often owned by international conglomerates, like Thomson Holidays, now a subsidiary of TUI AG, the German multinational.[12] It is now common for the large mass market tour companies to purchase a controlling interest in a chain of travel agencies, in order to control the distribution of their product. (This is an example of vertical integration.) The smaller chains are often based in particular regions or districts.

Independent agencies usually cater to a special or niche market, such as the needs of residents in an upmarket commuter town or suburb, or a particular group interested in a similar activity, such as sporting events, like football, golf, or tennis.[15]

Airline consolidators, tour operators, and other types of travel consolidators and wholesalers are high volume sales companies that specialize in selling to niche markets.[17] They may or may not offer various types of services, at a single point of access. These can be hotel reservations, flights or car-rentals. Sometimes the services are combined into vacation packages, that include transfers to the location and lodging. These companies do not usually sell directly to the public, but act as wholesalers to retail travel agencies. Commonly, the sole purpose of consolidators is to sell to ethnic niches in the travel industry. Usually no consolidator offers everything; they may only have contracted rates to specific destinations. Today, there are no domestic consolidators, with some exceptions for business class contracts.

Travel agencies in the 21st century 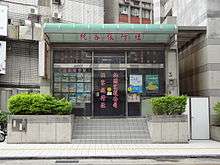 With general public access to the Internet since the mid-1990s, many airlines and other travel companies began to sell directly to passengers. As a consequence, airlines no longer needed to pay the commissions to travel agents on each ticket sold. Since 1997, travel agencies have gradually been dis-intermediated, by the reduction in costs caused by removing layers from the package holiday distribution network.[18][19] However, travel agents remain dominant in some areas such as cruise vacations where they represent 77% of bookings and 73% of packaged travel.[20]

In response, travel agencies have developed an internet presence of their own by creating travel websites, with detailed information and online booking capabilities. Travel agencies also use the services of the major computer reservations systems companies, also known as Global Distribution Systems (GDS), including: Amadeus CRS, Galileo CRS, SABRE, and Worldspan, which is a subsidiary of Travelport, allowing them to book and sell airline tickets, car rentals, hotels, and other travel related services. Some online travel websites allow visitors to compare hotel and flight rates with multiple companies for free; they often allow visitors to sort the travel packages by amenities, price, and proximity to a city or landmark.[21]

All travel sites that sell hotels online work together with GDS, suppliers, and hotels directly to search for room inventory. Once the travel site sells a hotel, the site will try to get a confirmation for this hotel. Once confirmed or not, the customer is contacted with the result. This means that booking a hotel on a travel website will not necessarily result in an instant confirmation. Only some hotels on a travel website can be confirmed instantly (which is normally marked as such on each site). As different travel websites work with different suppliers, each site has different hotels that it can confirm instantly. Some examples of such online travel websites that sell hotel rooms are Expedia, Reservations.com, Orbitz, and Priceline.

The comparison sites, such as Kayak.com and TripAdvisor, search the resellers sites all at once to save time searching. None of these sites actually sells hotel rooms.[22]

Often tour operators have hotel contracts, allotments, and free sell agreements which allow for the immediate confirmation of hotel rooms for vacation bookings.

Mainline service providers are those that actually produce the direct service, like various hotels chains or airlines that have a website for online bookings.

Portals serve as a consolidator of various airlines and hotels on the internet. They work on a commission from these hotels and airlines. Often, they provide cheaper rates than the mainline service providers, as these sites get bulk deals from the service providers.

A meta search engine, on the other hand, simply scrapes data from the internet on real time rates for various search queries and diverts traffic to the mainline service providers for an online booking. These websites usually do not have their own booking engine.

With many people switching to self-service internet websites, the number of available jobs as travel agents is decreasing.[23]

Since 1995, many travel agents have exited the industry, and relatively few young people have entered the field due to less competitive salaries.[24] However, others have abandoned the "brick and mortar" agency for a home-based business to reduce overhead, and those who remain have managed to survive by promoting other travel products, such as cruise lines and train excursions, or by promoting their ability to aggressively research and assemble complex travel packages on a moment's notice, essentially acting as an advanced concierge. In this regard, travel agents can remain competitive, if they become "travel consultants" with flawless knowledge of destination regions and specialize in topics like nautical tourism or cultural tourism.[25]