Not to be confused with United States of America.

The Organization of American States (Spanish: Organización de los Estados Americanos, Portuguese: Organização dos Estados Americanos, French: Organisation des États américains), or the OAS or OEA, is an intercontinental organization founded on 30 April 1948, for the purposes of regional solidarity and cooperation among its member states. Headquartered in Washington, D.C., United States,[1] the OAS's members are the 35 independent states of the Americas. 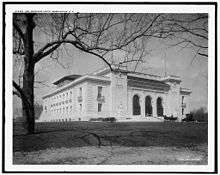 The Pan American Union shortly after its construction in 1910

The notion of an international union in the New World was first put forward by Simón Bolívar[3] who, at the 1826 Congress of Panama (still being part of Colombia), proposed creating a league of American republics, with a common military, a mutual defense pact, and a supranational parliamentary assembly. This meeting was attended by representatives of Gran Colombia (comprising the modern-day countries of Colombia, Ecuador, Panama and Venezuela), Peru, Bolivia, The United Provinces of Central America, and Mexico but the grandly titled "Treaty of Union, League, and Perpetual Confederation" was ultimately ratified only by Gran Colombia. Bolívar's dream soon floundered with civil war in Gran Colombia, the disintegration of Central America, and the emergence of national rather than New World outlooks in the newly independent American republics. Bolívar's dream of American unity was meant to unify Hispanic American nations against external powers. 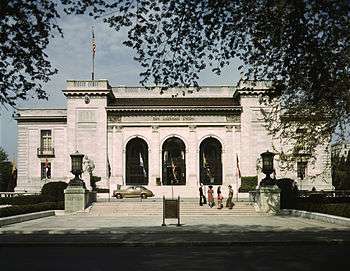 In the mid-1930s, U.S. President Franklin Delano Roosevelt organized an inter-American conference in Buenos Aires. One of the items at the conference was a "League of Nations of the Americas", an idea proposed by Colombia, Guatemala, and the Dominican Republic.[4] At the subsequent Inter-American Conference for the Maintenance of Peace, 21 nations pledged to remain neutral in the event of a conflict between any two members.[5] The experience of World War II convinced hemispheric governments that unilateral action could not ensure the territorial integrity of the American nations in the event of external aggression. To meet the challenges of global conflict in the postwar world and to contain conflicts within the hemisphere, they adopted a system of collective security, the Inter-American Treaty of Reciprocal Assistance (Rio Treaty) signed in 1947 in Rio de Janeiro.

The Ninth International Conference of American States was held in Bogotá between March and May 1948 and led by United States Secretary of State George Marshall, a meeting which led to a pledge by members to fight communism in the western hemisphere. This was the event that saw the birth of the OAS as it stands today, with the signature by 21 American countries of the Charter of the Organization of American States on 30 April 1948 (in effect since December 1951). The meeting also adopted the American Declaration of the Rights and Duties of Man, the world's first general human rights instrument.

The transition from the Pan American Union to OAS would have been smooth if it had not been for the assassination of Colombian leader Jorge Eliécer Gaitán. The Director General of the former, Alberto Lleras Camargo, became the Organization's first Secretary General. The current Secretary General is former Uruguayan minister of foreign affairs Luis Almagro.

Significant milestones in the history of the OAS since the signing of the Charter have included the following:

In the words of Article 1 of the Charter, the goal of the member nations in creating the OAS was "to achieve an order of peace and justice, to promote their solidarity, to strengthen their collaboration, and to defend their sovereignty, their territorial integrity, and their independence." Article 2 then defines eight essential purposes:

Over the course of the 1990s, with the end of the Cold War, the return to democracy in Latin America, and the thrust toward globalization, the OAS made major efforts to reinvent itself to fit the new context. Its stated priorities now include the following:

The General Secretariat of the Organization of American States consists of six secretariats.

The various committees of the Organization of American States include:

The General Assembly is the supreme decision-making body of OAS. It convenes once every year in a regular session. In special circumstances, and with the approval of two-thirds of the member states, the Permanent Council can convene special sessions.

The Organization's member states take turns hosting the General Assembly on a rotating basis. The states are represented at its sessions by their chosen delegates: generally, their ministers of foreign affairs, or their appointed deputies. Each state has one vote, and most matters—except for those for which the Charter or the General Assembly's own rules of procedure specifically require a two-thirds majority—are settled by a simple majority vote.

The General Assembly's powers include setting the OAS's general course and policies by means of resolutions and declarations; approving its budget and determining the contributions payable by the member states; approving the reports and previous year's actions of the OAS's specialized agencies; and electing members to serve on those agencies.

See also: Member states of the Organization of American States

All 35 independent nations of the Americas are members of the OAS. Upon foundation on 5 May 1948, there were 21 members:

The later expansion of the OAS included Canada and the newly independent nations of the Caribbean. Members with later admission dates (sorted chronologically):

Canada and the OAS

Although Canada obtained independence in its foreign policy from the United Kingdom in 1931, it chose not to join the OAS when it was first formed, despite its close relations with the United States. Canada became a Permanent Observer in the OAS on 2 February 1972. Canada signed the Charter of the Organization of American States on 13 November 1989 and this decision was ratified on 8 January 1990.

In 2004–2005, Canada was the second largest contributor to the OAS, with an annual assessed contribution representing 12.36 percent of the OAS Regular Budget (US$9.2 million) and an additional C$9 million in voluntary contributions to specific projects.[9][10] Shortly after joining as a full member, Canada was instrumental in the creation of the Unit for the Promotion of Democracy, which provides support for the strengthening and consolidation of democratic processes and institutions in OAS member states.[11]

Sanctions against the Dominican Republic

During the 6th Conference of Foreign Ministers of the Organization of American States (OAS) in Costa Rica, from 16 to 20 August 1960, it was agreed to unanimously a conviction against the State of the Dominican Republic. The penalty was motivated because the foreign ministers checked the veracity of the Rafael Trujillo regime had sponsored the attack against Rómulo Betancourt, at that time, constitutional president of Venezuela. The meeting was attended by foreign ministers from 21 American nations, including Cuba, because at that time had not been expelled from the inter-American system.

All countries, including the United States and Haiti broke off diplomatic relations with the Dominican Republic. Additionally an economic blockade that affected the exports of sugar was applied, which at that time was the pillar of the Dominican economy.

It was the first application of the Inter-American Treaty of Reciprocal Assistance, which had been adopted at the OAS on July 29, 1960.

Further information: Cuban relations with the Organization of American States

The current government of Cuba was excluded from participation in the Organization under a decision adopted by the Eighth Meeting of Consultation in Punta del Este, Uruguay, on 31 January 1962. The vote was passed by 14 in favor, with one against (Cuba) and six abstentions (Argentina, Bolivia, Brazil, Chile, Ecuador, and Mexico). The operative part of the resolution reads as follows:

This meant that the Cuban nation was still technically a member state, but that the current government was denied the right of representation and attendance at meetings and of participation in activities. The OAS's position was that although Cuba's participation was suspended, its obligations under the Charter, the American Declaration of the Rights and Duties of Man, etc. still hold: for instance, the Inter-American Commission on Human Rights continued to publish reports on Cuba's human rights situation and to hear individual cases involving Cuban nationals. However, this stance was occasionally questioned by other individual member states.

Cuba's position was stated in an official note sent to the Organization "merely as a courtesy" by Minister of Foreign Affairs Dr. Raúl Roa on 4 November 1964: "Cuba was arbitrarily excluded... The Organization of American States has no juridical, factual, or moral jurisdiction, nor competence, over a state which it has illegally deprived of its rights."[13]

The reincorporation of Cuba as an active member regularly arose as a topic within the inter-American system – for instance, it was intimated by the outgoing ambassador of Mexico in 1998[14] – but most observers did not see it as a serious possibility while the present government remained in power. Since 1960, the Cuban administration had repeatedly characterized the OAS as the "Ministry of Colonies" of the United States of America.[15][16] On 6 May 2005, President Fidel Castro reiterated that the island nation would not "be part of a disgraceful institution that has only humiliated the honor of Latin American nations."[17] After Fidel Castro's recent retirement and the ascent of his brother Raúl to power, this official position was reasserted. Venezuelan President Hugo Chávez promised to veto any final declaration of the 2009 Summit of the Americas due to Cuba's exclusion.[18]

On 17 April 2009, after a "trading of warm words" between the administrations of U.S. President Barack Obama and Cuban leader Raúl Castro, OAS Secretary General José Miguel Insulza said he would ask the 2009 General Assembly to annul the 1962 resolution excluding Cuba.[19]

On 3 June 2009, foreign ministers assembled in San Pedro Sula, Honduras, for the OAS's 39th General Assembly, passed a vote to lift Cuba's suspension from the OAS. The United States had been pressuring the OAS for weeks to condition Cuba's readmission to the group on democratic principles and commitment to human rights. Ecuador's Foreign Minister Fander Falconí said there will be no such conditions. "This is a new proposal, it has no conditions—of any kind," Falconí said. "That suspension was made in the Cold War, in the language of the Cold War. What we have done here is fix a historic error."[20] The suspension was lifted at the end of the General Assembly, but, to be readmitted to the Organization, Cuba will need to comply with all the treaties signed by the Member States, including the Inter-American Democratic Charter of 2001.[21] A Declaration by Cuba's Revolutionary Government dated 8 June 2009 stated that while Cuba welcomed the Assembly's gesture, in light of the Organization's historical record "Cuba will not return to the OAS."[22]

Those attending the Extraordinary Assembly of the OAS voted to suspend Honduras.

Following the expulsion of its President Manuel Zelaya, Honduras' membership of the Organization was suspended unanimously at midnight on 5 July 2009.[23] The de facto government had already announced it was leaving the OAS hours earlier; this was not, however, taken into account by the OAS, which does not recognize that government as legitimate.[24] An extraordinary meeting had been conducted by the OAS in Washington, D.C., with Zelaya in attendance.[23][25][26] The suspension of Honduras was approved unanimously with 33 votes (Honduras did not vote).[23][26] This was the first suspension carried out by the OAS since that of Cuba in 1962.[23][26]

After Zelaya's return to Honduras in 2011, the country was re-admitted to the Organization on 1 June 2011 with 32 votes in favor and 1 (Ecuador) against. Venezuela expressed some reservations.[27]

As of 31 January 2014, there are 69 permanent observer countries including the four countries with territories in the Americas—Denmark, France, the Netherlands, and the United Kingdom; as well as the European Union.[28][29][30]

Statue of Isabella I the Catholic in front of the seat of the Organization of American States in Washington D.C.

Although a number of other languages have official status in one or more member states of OAS (Dutch in Suriname; Haitian Creole alongside French in Haiti; Quechua and Aymara in Peru, Ecuador and Bolivia; Guaraní in Paraguay), they are not official languages of the Organization. 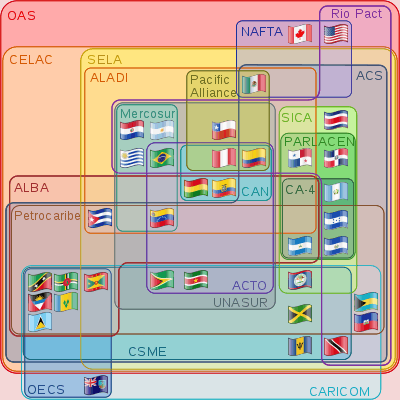 A clickable Euler diagram showing the relationships between various multinational organisations in the Americas.v • d • e