The club have won the league title twice but have never won the Azerbaijan Cup, despite reaching four finals.[1]

The club has been functioning since 1997, but initially it had a different name. The club originally shared named with Khazar University, the first private university in Azerbaijan which founded the club. The club debuted in the amateur league in 1997. In 1999, Khazar University began to play in the Azerbaijan Premier League and club ended its debut in 11th place.[2] In subsequent years, Inter finished in 7th place (2000/01 season) and 3rd place (2003–04 season).

The Double and Tskhadadze years (2004–present)

In summer of 2004, all rights of the Khazar University club were transferred to newly created Inter Baku Professional Football Club, and the team participated in the 13th championship of the Azerbaijani Premier League under the name of Inter Baku. Later in 2004, certain structural changes were made in the club's management, and Inter Baku was renamed the Inter Professional Club, finishing the 2004–2005 season in seventh place. Inter's progression up the standings continued in the 14th iteration of the Azerbaijan Premier League when Inter finished in fourth place.

The club repeated its performance with fourth again in 2006–07 before winning the league championship in 2007–08. Following its victory in the domestic league, Inter qualified for its first-ever appearance in the UEFA Champions League in 2008 and advanced to the second qualifying round by defeating Rabotnički of the Republic of Macedonia on away goals.[5]

In 2012, the club recorded Azerbaijani record for the biggest win in a European competition by beating Narva Trans 5–0 in Estonia.[9] The club had started the 2013–14 season with a three-game losing streak, setting a record for worst start to a season in its history.[10] However, the team managed to clinch second spot in the league.[11] 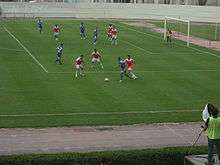 The club play their home matches at the Inter Arena, an all-seater football stadium situated in Baku. Since 2008, the stadium has been under development, surrounded by practice fields, administration buildings and newly built four-star Inter Hotel.

Azerbaijani teams are limited to nine players without Azerbaijani citizenship. The squad list includes only the principal nationality of each player; several non-European players on the squad have dual citizenship with an EU country.

As of 30 October 2016. Note: Flags indicate national team as defined under FIFA eligibility rules. Players may hold more than one non-FIFA nationality.

Lists of the players with the most caps and top goalscorers for the club, as of 14 November 2014 (players in bold signifies current Inter player). Ģirts Karlsons is the club's all-time top scorer with 36 goals in 73 games.[13]

Khagani Mammadov is one of the most goal scoring players. 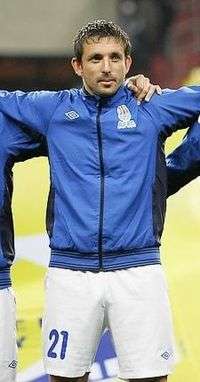 Information correct as of match played 2 November 2014. Only competitive matches are counted.

Nationality is indicated by the corresponding FIFA country code(s).