Until 1959 the main headquarters were located in Paris, and later in Bern. In 1995, UEFA headquarters transferred to Nyon, Switzerland. Henri Delaunay was the first general secretary and Ebbe Schwartz the first president. The last elected president was former French footballer Michel Platini, who was sanctioned in a 2015 corruption case. 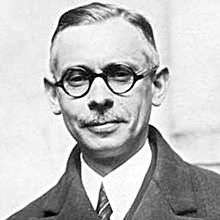 UEFA was founded on 15 June 1954 in Basel, Switzerland after consultation between the Italian, French, and Belgian associations. Initially, the European football union consisted of 25 members whose number doubled by the early 1990s. UEFA membership coincides for the most part with recognition as a sovereign country in Europe, although there are some exceptions. Some states (Monaco and Vatican City) are not members. Some UEFA members are not sovereign states, but form part of a larger recognized sovereign state in the context of international law. These include Northern Ireland, Scotland, England and Wales, (Countries of the United Kingdom), Gibraltar (British Overseas Territory), the Faroe Islands (Autonomous country within the Danish kingdom), and Kosovo (disputed territory and partially recognised state), however in the context of these countries government functions concerning sport tend to be carried at the territorial level coterminous with the UEFA member entity. Some UEFA members are transcontinental states (Armenia, Azerbaijan, Georgia, Kazakhstan, Turkey and Russia). Countries which had previously been members of the Asian Football Confederation were also admitted to the European football association, particularly Israel and Kazakhstan. Additionally some UEFA member associations allow teams from outside their association's main territory to take part in their "domestic" competition. AS Monaco, for example, takes part in the French League (though a separate sovereign entity); Welsh clubs Cardiff City and Swansea City participate in the English League; Berwick Rangers, situated in England, play in the Scottish Professional Football League and Derry City, situated in Northern Ireland, play in the Republic of Ireland-based League of Ireland.

UEFA runs official international competitions in Europe and some countries of Northern, Southwestern and Central Asia for national teams and professional clubs, known as UEFA competitions, some of which are regarded as the world's most prestigious tournaments.

UEFA also organized the UEFA-CAF Meridian Cup with CAF for youth teams in an effort to boost youth football. UEFA launched the UEFA Regions' Cup, for semi-professional teams representing their local region, in 1999. In futsal there is the UEFA Futsal Championship and UEFA Futsal Under-21 Championship.

The Italian, German, Spanish and French men's national teams are the sole teams to have won the European football championship in all categories. 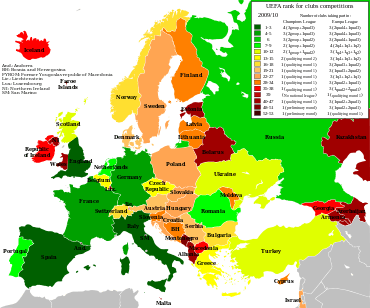 The top-ranked UEFA competition is the UEFA Champions League, which started in the 1992/93 season and gathers the top 1–4 teams of each country's league (the number of teams depend on that country's ranking and can be upgraded or downgraded); this competition was re-structured from a previous one that only gathered the top team of each country (held from 1955–92 and known as the European Champion Clubs' Cup or simply the European Cup).

The UEFA Intertoto Cup was a summer competition, previously operated by several Central European football associations, which was relaunched and recognized as official UEFA club competition by UEFA in 1995.[8] The last Intertoto Cup took place in 2008.

The European/South American Cup was jointly organised with CONMEBOL between the Champions League and the Copa Libertadores winners.[9]

Juventus of Italy was the first team in Europe—remaining the only one to date (2015)—to win all UEFA's official championships and cups[14] and, in commemoration of achieving that feat, have received The UEFA Plaque by the Union of European Football Associations on 12 July 1988.[15][16]

UEFA's premier futsal competition is the UEFA Futsal Cup, a tournament started in 2001 which replaced the former Futsal European Clubs Championship. This event, despite enjoying a long and well-established tradition in the European futsal community, dating back to 1984, was never recognized as official by UEFA.

Adidas is a secondary sponsor and supplies the official match ball and referee uniform for all UEFA competitions.

Dissatisfied fans across Europe have referred to the organisation as UEFA mafia, including in Russia’s top league,[26] in Bulgaria’s top league,[27] and in a Champions League group stage match held in Sweden.[28] The term has also been covered for its use outside of stadiums, for example during a protest in Kosovo outside an EU building following the Serbia v Albania (UEFA Euro 2016 qualifying) match.[29]

Following the 2015 FIFA corruption case, the current president of UEFA, Michel Platini, was also involved himself in the case. Swiss prosecutors accuse FIFA president Sepp Blatter of making a "disloyal payment" of $2m (£1.6m) to Mr Platini. Swiss attorney general, Michael Lauber, stated: "We didn't interview Mr Platini as a witness, that's not true. We investigated against him in between as a witness and an accused person".[30][31] Both Platini and Sepp Blatter are currently under formal investigation by FIFA's independent ethics committee.[32] On 8 October 2015, Platini was provisionally suspended for 90 days from any football-related activity.[33]

Gibraltar and Kosovo are not ranked as they haven't yet played any matches since their admission to FIFA on 13 May 2016.