"Interior angle" redirects here. For interior angles on the same side of the transversal, see Transversal line. 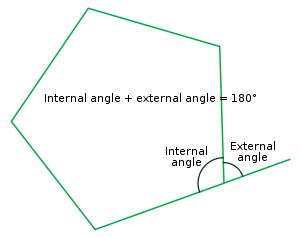 In geometry, an angle of a polygon is formed by two sides of the polygon that share an endpoint. For a simple (non-self-intersecting) polygon, regardless of whether it is convex or non-convex, this angle is called an interior angle (or internal angle) if a point within the angle is in the interior of the polygon. A polygon has exactly one internal angle per vertex.

If every internal angle of a simple polygon is less than 180°, the polygon is called convex.

In contrast, an exterior angle (or external angle) is an angle formed by one side of a simple polygon and a line extended from an adjacent side.[1][2]:pp. 261-264

The interior angle concept can be extended in a consistent way to crossed polygons such as star polygons by using the concept of directed angles. In general, the interior angle sum in degrees of any closed polygon, including crossed (self-intersecting) ones, is then given by 180(n–2k)° where n is the number of vertices and the non-negative number k is the number of total revolutions of 360° one undergoes walking around the perimeter of the polygon. In other words, 360k° represents the sum of all the exterior angles. For example, for ordinary convex and concave polygons k = 1, since the exterior angle sum is 360°, and one undergoes only one full revolution walking around the perimeter.