Not to be confused with Star-shaped polygon.

The first usage is included in polygrams which includes polygons like the pentagram but also compound figures like the hexagram.

Star polygon names combine a numeral prefix, such as penta-, with the Greek suffix -gram (in this case generating the word pentagram). The prefix is normally a Greek cardinal, but synonyms using other prefixes exist. For example, a nine-pointed polygon or enneagram is also known as a nonagram, using the ordinal nona from Latin. The -gram suffix derives from γραμμή (grammḗ) meaning a line.[2]

A regular star polygon is denoted by its Schläfli symbol {p/q}, where p and q are relatively prime (they share no factors) and q ≥ 2.

The symmetry group of {n/k} is dihedral group Dn of order 2n, independent of k.

A regular star polygon can also be obtained as a sequence of stellations of a convex regular core polygon.

If p and q are not coprime, a degenerate polygon will result with coinciding vertices and edges. For example {6/2} will appear as a triangle, but can be labeled with two sets of vertices 1-6. This should be seen not as two overlapping triangles, but a double-winding of a single unicursal hexagon.[6][7] 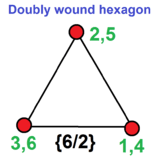 When the intersecting lines are removed, the star polygons are no longer regular, but can be seen as simple concave isotoxal 2n-gons, alternating vertices at two different radii, which do not necessarily have to match the regular star polygon angles. Branko Grünbaum in Tilings and Patterns represents these stars as |n/d| that match the geometry of polygram {n/d} with a notation {nα} more generally, representing an n-sided star with each internal angle α<180°(1-2/n) degrees.[1] For |n/d|, the inner vertices have an exterior angle, β, as 360°(d-1)/n.

These polygons are often seen in tiling patterns. The parametric angle α (degrees or radians) can be chosen to match internal angles of neighboring polygons in a tessellation pattern. Johannes Kepler in his 1619 work Harmonices Mundi, including among other period tilings, nonperiodic tilings like that three regular pentagons, and a regular star pentagon (5.5.5.5/2) can fit around a vertex, and related to modern penrose tilings.[8]

The interior of a star polygon may be treated in different ways. Three such treatments are illustrated for a pentagram. Branko Grunbaum and Geoffrey Shephard consider two of them, as regular star polygons and concave isogonal 2n-gons.[8]

When the area of the polygon is calculated, each of these approaches yields a different answer.

Star polygons in art and culture

Star polygons feature prominently in art and culture. Such polygons may or may not be regular but they are always highly symmetrical. Examples include: