The city of Um Qais (Gadara) 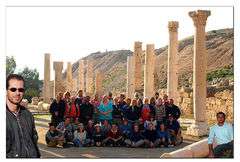 An Australian excavation team in the ancient Roman city of Pella 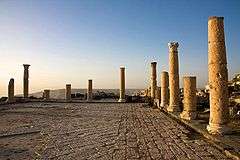 A Byzantine church in Um Qais 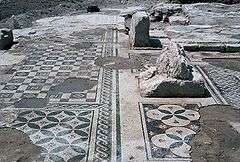 A Byzantine site in Ar Ramtha

Irbid was distinguished by the Greek, Roman and Islamic civilizations leaving behind them historical and archaeological sites. Roman and Greek cities such as Arabella (Irbid), Capitolias (Beit–Ras), Dion (Al Hisn) that contains the Roman artificial hill and small Roman lake (water reservoir), Gadara (Umm Qais), Pella (Tabeqt Fahel) and Abila (Qwailbeh) were established. They were members of the Decapolis: a pact that consists of the ten Roman cities in the area. Ghassanids had established their country in the north of Jordan covering Irbid, Golan and Horan plains. It was described as the most beautiful Syrian countries. Also it had the Islamic soldiers’ supplies. Christianity spread out there in the second and the third century A.D.

Irbid witnessed the Edomite and Ammonite civilizations. Its significance was reflected in the Hellenistic period. With the conversion work of Islam, the Islamic opening armies achieved an advance. As a result, Sharhabeel Bin Hasnaa made a glorious Islamic victory in 13 A.H (634 A.D.). He opened Irbid, Beit-Ras and Umm Qais. The Islamic leader Abu Obideh Amer Bin Al-Jarrah was able to open Pella. In 15 A.H. (636 A.D.) and in the prime of these victories, Khalid Bin Al-Walid managed to crush out the Roman armies in the long Battle of Yarmouk. Consequently, he managed to put an end to the Roman presence in the area. In 583 A.H (1187 A.D.) Saladin’s armies advanced to Hittin in which the most ferocious battle in the history of the Crusades took place, This battle was followed by recapturing Jerusalem and returning it back to the Islamic sovereignty.

During the Mamluk period, Irbid played an important role as a stopping point for the pilgrims’ caravans coming from Turkey, north of Iraq and south of Russia. It was an important communication hub and a gateway to Egypt, Hijaz and Palestine coast, especially during the time in which Irbid was linked with Damascus, which had a positive effect on the cultural and scientific movement of Irbid, as referred by historical writings. In addition to the spread of a number of scientists and Islamic jurisprudence scholars, the Islamic expansion left many graves of the companions of the prophet Muhammad, many mosques and Islamic buildings such as Dar Assaraya (the former prison) which has been converted into a museum, Hibras Mamluk Mosque, Irbid Mamluke Mosque and Saham Umayyed Mosque.

Irbid Governorate is located in the far north west of Jordan in the Yarmouk River basin and Jordan Valley. Most of the governorate is part of the Hawran plateau, which covers northern Jordan, and south-west Syria. The governorate is bordered by Syria (the Golan Heights) from the north, the Jordan River from the west, Mafraq Governorate from the east, and Jerash, Ajloun and Balqa Governorates from the south. 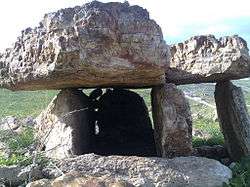 A dolmen in the ancient village of Juhfieh

The Jordan national census of 2004 demographic data indicate that Irbid Governorate had a population of 928,292. Estimates put the population slightly over one million for the year 2009. The next census is scheduled to be held in 2014.

Irbid Governorate is named after its capital and largest city. It is divided into nine departments called alweya which is the plural of liwaa. Many of these departments are within the sphere of influence (and constitute districts) of metropolitan Irbid 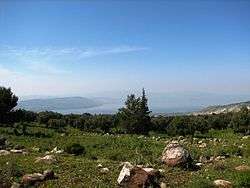 A view from northern Irbid over the Sea of Galilee

Irbid, the "Bride of the North," is considered as one of the most beautiful Jordanian cities. Its population reaches about 650,000 (2008) and is situated on a plain land, 65 km. to the north of the capital, Amman. It is situated in the north west of the Hashemite Kingdom of Jordan, surrounded by fertile agricultural lands from north, east, west and south. Irbid was named “The Daisy” after the daisy flower, which grows in its plains. Irbid witnessed human settlements 5000 B.C., such as settlements of the Edomites, Ghassanids and Southern Arab civilizations.

There are three Qualified Industrial Zones (QIZ) in Irbid Governorate: Prince Hasan Industrial City, Cyber City, and Jordan River Crossing City. The net exports value of Prince Hasan Industrial City reached US$274 million in 2001 benefiting from its status as a Qualified Industrial Zone (QIZ). Clothings, chemicals and electronics constituted its main exports.[2] Irbid is at the top of the Jordanian agricultural regions especially in the production of citrus, olives, wheat and bee honey.