Israel Aerospace Industries (Hebrew: התעשייה האווירית לישראל ha-ta'asiya ha-avirit le-yisra'el) or IAI (תע"א) is Israel's prime aerospace and aviation manufacturer, producing aerial and astronautic systems for both military and civilian usage. It has 16,000 employees as of 2013. IAI is wholly owned by the government of Israel.

Although IAI's main focus is aviation and high-tech electronics, it also manufactures military systems for ground and naval forces. Many of these products are specially suited for the Israel Defense Forces (IDF) needs, while others are also marketed to foreign militaries.

Israel Aerospace Industries was founded in 1953 as Bedek Aviation Company under the initiative of Shimon Peres, then director general of the Ministry of Defense, in order to maintain Israel Defense Forces aircraft.[1] The company originally had 70 employees and recruited American born aviation expert Al Schwimmer as the company's founder and first president.[2]

In 1959 Bedek began manufacturing its first aircraft, a V-tailed twinjet trainer of French design, the Fouga Magister, locally called Tzukit (Monticola). The Tzukit became the Israeli Air Force principal trainer for 50 years. The IAI Tzukit was also used in the 1967 Six Day War by 147 Squadron as a close support aircraft, attacking targets on the Egyptian front during the first day of the war, when Israel's more capable combat aircraft were deployed against Arab air bases and aircraft.[3] They were then deployed against Jordanian forces, including armour, on the West Bank. The Magister proved effective at the close-support mission albeit with heavy casualties, with six being lost.[4]

The first aircraft to be fully designed and built by IAI, the IAI Arava STOL (short take-off and landing) transport aircraft, first flew in 1969 after three years of development.[5]

In response to the French embargo, IAI began developing its own fighter aircraft, a derivative of the Mirage 5 called the IAI Nesher ("hawk"), in 1968. The Nesher entered service in 1971, in time for the Yom Kippur War. The Nesher was followed by the IAI Kfir ("lion cub"), which was developed as a result of Israel's need for adapting the Dassault Mirage III to the specific requirements of the Israeli Air Force. The Kfir entered service with the IAF in 1975, the first units being assigned to the 101st "First Fighter" Squadron. Over the following years, several other squadrons were also equipped with the new aircraft. The Kfir's first recorded combat action took place on 9 November 1977, during an Israeli air strike on a training camp at Tel Azia, in Lebanon. The only air victory claimed by a Kfir during its service with the IAF occurred on 27 June 1979 when a Kfir C.2 shot down a Syrian MiG-21.[5]

The IAI Kfir has been exported to Colombia, Ecuador, Sri Lanka and was leased to the US Navy and the US Marine Corps from 1985 to 1989, to act as adversary aircraft in dissimilar air combat training (DACT).[6]

In 1969 IAI acquired North American Rockwell's Jet Commander series of business aircraft. This became the basis for the IAI Westwind line. Work on an improved Westwind the Astra, by stretching the fuselage and designing a new swept wing, began in the late 1970s,[7] with the first prototype flight on 19 March 1984.[8] The first production Astra flew on 20 March 1985, FAA certification came on 29 August 1985 and customer deliveries started in 1986.[8]

In the 1970s IAI also entered the Unmanned aerial vehicle (UAV) market with the development of the IAI Scout. In 1984, IAI formed a joint venture with rival Israeli company Tadiran to market both companies' UAV's, the Tadiran Mastiff and the IAI Scout.[9]

By 1980s the original Bedek maintenance business was conducting extensive overhauls on dozens of different aircraft types, working on engines as well as airframes and interiors, IAI could provide more comprehensive refurbishments than even the aircraft manufacturers themselves. The unit had 4,000 employees by the mid-1980s and overhauled a huge range of aircraft, from propeller-driven trainers to airliners; including big civil aviation programs, such as conversion of Boeing 747s to freighters.[10]

In 1980 the Government of Israel decided to use the experience IAI had accumulated to develop and manufacture a modern fighter plane to be the mainstay of the Israel Air Force. The aircraft, called the IAI Lavi, was to be a superior attack aircraft with advanced weapons systems. It had its rollout in July 1986 and successful maiden flight in December 1986.[11]

In August 1987, after extensive government deliberations, the decision was made (by one vote) to cancel the Lavi program, due to the questioning of Israel's economic ability to support the cost of such an extensive program.[12] This led to a serious crisis at IAI which necessitated a major reorganization of the company's structure and business strategy; the company's work force of more than 22,000 people was cut by 5,500 in 1988. However, the Lavi program was credited with developing a number of advanced technologies that IAI was able to market.[11] 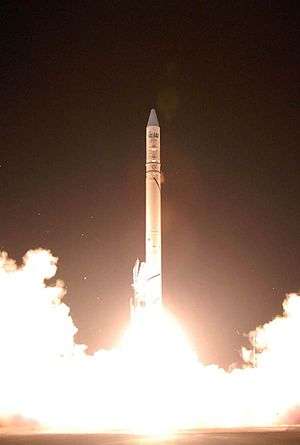 Model of an Amos-5 satellite during "Semana de Espacio", in IFEMA, Madrid 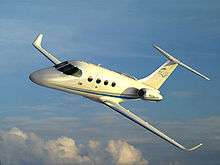 The Avocet ProJet with IAI Logo 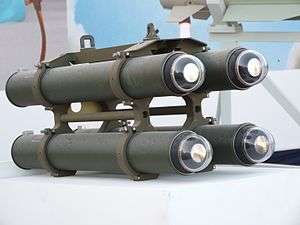 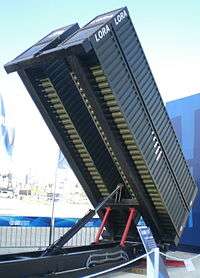 By 1989 IAI posted a profit of $11.8 million on sales of $1.28 billion. The company had four divisions—Aircraft, Aviation, Electronics, and Technologies—and 17 factories. IAI was established as a world leader in upgrading aircraft. Planes such as the Vietnam-era McDonnell Douglas F-4 Phantom II were modernized with advanced avionics and weaponry.

In the 1990s IAI entered the space race with the AMOS communications satellites, Ofeq observation satellites and the Shavit space launcher.[11]

In December 1997, the IAI Galaxy, a business jet with an intercontinental range developed as a joint venture Galaxy Aerospace with the Hyatt Corporation, made its first flight and entered service in 2000. In May 2001, General Dynamics' Gulfstream Aerospace bought IAI's Galaxy Aerospace Co. L.P. unit for $330 million, although IAI continues to perform the most of the assembly and development of the jets which are marketed by Gulfstream.[13]

In 2003, Israel Aircraft Industries attempted to enter the VLJ (very light jet) Market by launching the Avocet ProJet, a 6-8 seat high utilization air taxi with a list price almost half the cost of the least expensive business jet available at that time. In early 2006, ProJet development stalled after a major undisclosed US OEM pulled out of the program due to unspecified reasons.[14]

The company was working with the Aviation Technology Group on a military trainer version of the ATG Javelin, a fighter style personal jet. The version being developed would have compete against a large field of jet trainers at a much lower cost of acquisition and maintenance. ATG halted development of the Javelin in 2008 due to a lack of funds.

In March 2004 IAI signed a $1.1 billion contract with India to install three EL/W-2090 AWACS systems on Russian-made Ilyushin Il-76 transports, which are based in part on IAI's earlier EL/M-2075 Phalcon platform which was developed in the 1990s.[15] In the late 2000s IAI developed the follow-on EL/W-2085 system which is installed on heavily modified Gulfstream G550 aircraft and which besides serving in the IAF were also sold to Singapore and Italy.

On 6 November 2006, IAI changed its corporate name from "Israel Aircraft Industries Ltd." to "Israel Aerospace Industries Ltd."; to more accurately reflect the current scope of the firm's business activities, which includes not just aircraft, but also systems, satellites and launchers, as well as maritime and ground systems.

On 13 April 2009, the Moscow Times reported that the Russian Defense Ministry had signed an agreement with Israel Aerospace to purchase $50 million in pilotless drone aircraft. The contract reportedly includes three types of UAVs manufactured by the company.[16]

In January 2012, IAI announced a sale of $1.1 billion of defense systems to an Asian country. The deal has been signed but the company did not name the buyer. It was reported that the sale will include IAI aircraft, missiles and intelligence technologies.[17]

IAI is a member of the prestigious Trace International and Society of Corporate Compliance and Ethics(SCCE) organizations and recognized in the Transparency International April 2015 report to be in the top third of worldwide defense companies for its ethics and anti-corruption programs.[19]