High technology, often abbreviated to high tech (adjective forms high-technology, high-tech or hi-tech) is technology that is at the cutting edge: the most advanced technology available.

As of the onset of the 21st century, products considered high tech are often those that incorporate advanced computer electronics. However, there is no specific class of technology that is high tech—the definition shifts and evolves over time—so products hyped as high-tech in the past may now be considered to be everyday or outdated technology.

The opposite of high tech is low technology, referring to simple, often traditional or mechanical technology; for example, a calculator is a low-tech calculating device.

Perhaps the first occurrence of the phrase is in a 1958 The New York Times story advocating "atomic energy" for Europe:[1] "... Western Europe, with its dense population and its high technology ..." A 1968 occurrence is about technology companies along Boston's Route 128:

It is not clear whether the term comes from the high technologies flourishing in the glass rectangles along the route or from the Midas touch their entrepreneurs have shown in starting new companies.[2]

By 1969, Robert Metz was using it in a financial column:

Metz used the term frequently thereafter; a few months later he was using it with a hyphen, saying that a fund "holds computer peripheral... business equipment, and high-technology stocks,"[4] and in a 1971 article in its first occurrence in the abbreviated form "high tech."[5]

Because the high-tech sector of the economy develops or uses the most advanced technology known, it is often seen as having the most potential for future growth. This perception has led to high investment in high-tech sectors of the economy. High-tech startup enterprises receive a large portion of venture capital; However, if investment exceeds actual potential, as has happened in the past, then investors can lose all or most of their investment. High tech is often viewed as high risk, but offering the opportunity for high profits.

Like Big Science, high technology is an international phenomenon, spanning continents, epitomized by the worldwide communication of the Internet. Thus a multinational corporation might work on a project 24 hours a day, with teams waking and working with the advance of the sun across the globe; such projects might be in software development or in the development of an integrated circuit. The help desks of a multinational corporation might thus employ, successively, teams in Kenya, Brazil, the Philippines, or India, with the only requirement fluency in the mother tongue, be it Spanish, Portuguese or English. There are several high technology definitions that can be found. Moreover, there are many problems with identifying high technology. There are large diversity of definitions that are used. Here is a short overview of a number of different techniques to define high technology. 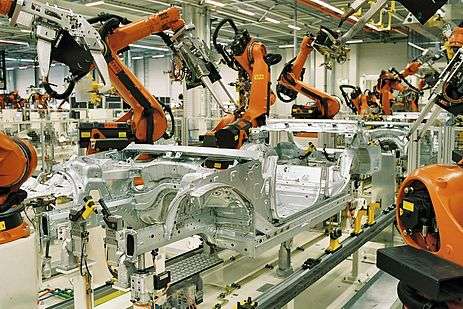 The sector approach classifies industries according their technology intensity, product approach according to finished products.

Further analysis from OECD shows that using research intensity as an industry classification indicator is also possible. The OECD does not only take the manufacturing but also the usage rate of technology into account. The OECD's classification is as follows (stable since 1973):

Furthermore, OECD’s product-based classification supports the technology intensity approach. It can be concluded that companies in a high-tech industry do not necessarily produce high-tech products and vice versa. This creates an aggregation problem.

When speaking of a high-tech society in a non-literal way, it is usually in reference to an overall society based in high-tech. However, this is something generally unattainable by the definition comprising its scarcity among every technology available. Many countries and regions like United States, Singapore, Canada, Italy, Greece, Denmark, Belgium, the Netherlands, Norway, Ireland, Iceland, Israel, Lithuania, Japan, Russia, the United Kingdom, Estonia, Australia, New Zealand, Germany, South Korea, Taiwan, Hong Kong, Finland, Spain, Sweden, Switzerland and France are generally considered high-tech in relation to other countries, since it is common for its citizens having access to cutting-edge technology, in consumer's terms, as can cities like Shenzhen in China and Mumbai in India. Research-oriented institutions such as DARPA, European Space Agency, Ministry of International Trade and Industry, Mitre Corporation, NASA, NSF, CERN and universities with high research activity such as MIT and Stanford might be considered high-tech microsocieties in relation to the general surrounding socio-economic region or overall activity sector.

Some geographical areas, such as the Silicon Valley, can be considered a high-tech startups society:

The spark that set off the explosive boom of “Silicon startups” in Stanford Industrial Park was a personal dispute in 1957 between employees of Shockley Semiconductor and the company’s namesake and founder, Nobel laureate and co-inventor of the transistor William Shockley... (His employees) formed Fairchild Semiconductor immediately following their departure....

After several years, Fairchild gained its footing, becoming a formidable presence in this sector. Its founders began to leave to start companies based on their own, latest ideas and were followed on this path by their own former leading employees... The process gained momentum and what had once begun in a Stanford’s research park became a veritable startup avalanche.... Thus, over the course of just 20 years, a mere eight of Shockley’s former employees gave forth 65 new enterprises, which then went on to do the same...[6]

A news outlet focusing on recent tech news and developments as well as game and gadget reviews could also be referred to as 'the high tech society'. One website, belonging to Carver Networks, owned by entrepreneur and founder Kimberly Carver, adopted the term as a legal name in June 2012.