Ivan Alexander (Bulgarian: Иван Александър, transliterated Ivan Aleksandǎr;[1] pronounced [iˈvan alɛkˈsandər]; original spelling: ІѠАНЪ АЛЄѮАНдРЪ),[2] also sometimes Anglicized as John Alexander,[3] ruled as Emperor (Tsar) of Bulgaria from 1331 to 1371,[4] during the Second Bulgarian Empire. The date of his birth is unknown. He died on 17 February 1371. The long reign of Ivan Alexander is considered a transitional period in Bulgarian medieval history. Ivan Alexander began his rule by dealing with internal problems and external threats from Bulgaria's neighbours, the Byzantine Empire and Serbia, as well as leading his empire into a period of economic recovery and cultural and religious renaissance.[5]

However, the emperor was later unable to cope with the mounting incursions of Ottoman forces, Hungarian invasions from the northwest and the Black Death.[4] In an ill-fated attempt to combat these problems, he divided the country between his two sons,[6][7] thus forcing it to face the imminent Ottoman conquest weakened and divided.[4][7]

The new ruler set about consolidating his position by regaining territories recently lost to the Byzantine Empire. In 1331 Ivan Alexander campaigned around Adrianople and reconquered northeastern Thrace.[5][6] Meanwhile, Stefan Uroš IV Dušan deposed his father Stefan Uroš III Dečanski and became Serbian king in 1331. This helped normalize the previously tense relations between the two countries. Ivan Alexander and Stefan Uroš IV Dušan concluded an alliance, which was cemented by the marriage of the Serbian king to Helena of Bulgaria, a sister of Ivan Alexander, on Easter 1332.[5][6][10]

At about the same time, Belaur, a brother of Michael Asen III, rebelled in Vidin, probably in support of his deposed nephew Ivan Stefan's claim to the throne. The advance of the Byzantine Emperor Andronikos III Palaiologos against Bulgaria in the summer of 1332 protracted military operations against the rebels. The Byzantines overran Bulgarian-controlled northeastern Thrace, but Ivan Alexander rushed southward with a small army and swiftly caught up with Andronikos III at Rusokastro.[10]

After giving the impression that he wished to negotiate, Ivan Alexander, reinforced by Mongol cavalry, overwhelmed the smaller but better organized Byzantine army in the Battle of Rusokastro.[6] The contested cities surrendered to Ivan Alexander, while Andronikos III sought refuge within the walls of Rusokastro. The war ended with Ivan Alexander meeting Andronikos and agreeing a peace based on the status quo. To seal the alliance, he betrothed his eldest son, Michael Asen IV, to Andronikos's daughter Maria (Eirene), the marriage eventually taking place in 1339.[6][13] The Bulgarian emperor was now free to turn his attentions to Belaur, but it was not until 1336 or 1337 that the rebellion in the northwest was put down.[14]

In about 1332 Ivan Alexander had crowned his eldest son Michael Asen IV co-emperor, perhaps to safeguard possession of the throne by his own family. He followed up this traditional association with the coronation of his younger sons Ivan Sracimir and Ivan Asen IV in 1337. Ivan Alexander may have intended the creation of two younger co-emperors to establish immediate control over important cities and regions, as Ivan Sracimir was eventually based in Vidin, and Ivan Asen IV perhaps in Preslav. Nevertheless, this was a marked departure from Byzantine practice, in which younger sons of the sovereign were made despotēs, whether they were charged with a territorial administration or not.[15]

Relations with the Byzantine Empire 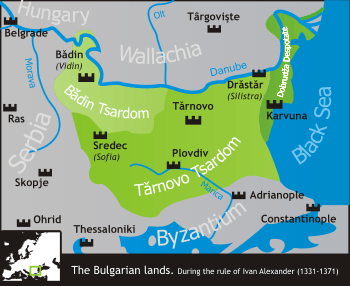 The Bulgarian lands during the reign of Ivan Alexander[16]

In 1341–1347 the Byzantine Empire was plunged into a protracted civil war between the regency for Emperor John V Palaiologos under Anna of Savoy and his intended guardian John VI Kantakouzenos. The neighbours of the Byzantines took advantage of the civil war, and while Stefan Uroš IV Dušan of Serbia sided with John VI Kantakouzenos, Ivan Alexander backed John V Palaiologos and his regency.[6] Although the two Balkan rulers picked opposite sides in the Byzantine civil war, they maintained their alliance with each other. As the price for Ivan Alexander's support, the regency for John V Palaiologos ceded him the city of Philippopolis (Plovdiv) and nine important fortresses in the Rhodope Mountains in 1344.[4][19] This peaceful turnover constituted the last major success of Ivan Alexander's foreign policy.

Rise of Serbia and the Ottoman threat 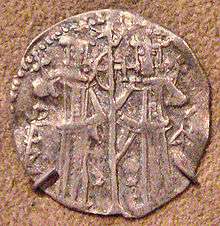 During the same period, the Serbian king took advantage of the Byzantine civil war to take possession of what is now Macedonia, and of most of Albania and northern Greece. In 1345 he began to call himself "Emperor of Serbs and Greeks", and in 1346 he was crowned as such by the newly created Serbian Patriarch.[6] These actions, which the Byzantines received with indignation, appear to have been supported by Bulgaria, as the Patriarch of Bulgaria Simeon had participated in both the creation of a Serbian Patriarchate and the imperial coronation of Stefan Uroš IV Dušan.[20]

By the second half of the 1340s, little remained of Ivan Alexander's initial successes. John VI Kantakouzenos' Turkish allies pillaged parts of Bulgarian Thrace in 1346, 1347, 1349, 1352 and 1354, to which were added the ravages of the Black Death.[21] The Bulgarians' attempts to repel the invaders met with repeated failure, and Ivan Alexander's third son and co-emperor, Ivan Asen IV, was killed in battle against the Turks in 1349, as was his older brother Michael Asen IV in 1355 or a little earlier.[22]

By 1351 the Byzantine civil war was over, and John VI Kantakouzenos had realized the threat posed by the Ottomans to the Balkan Peninsula. He appealed to the rulers of Serbia and Bulgaria for a united effort against the Turks and asked Ivan Alexander for money to construct warships,[6][23] but his appeals fell on deaf ears as his neighbours distrusted his intentions.[24] A new attempt for cooperation between Bulgaria and the Byzantine Empire followed in 1355,[25] after John VI Kantakouzenos had been forced to abdicate and John V Palaiologos had been established as supreme emperor. To cement the treaty, Ivan Alexander's daughter Keraca Marija[26] was married off to the future Byzantine Emperor Andronikos IV Palaiologos,[4] but the alliance failed to produce concrete results.[27]

At home Ivan Alexander compromised the internal stability of his realm by divorcing his first wife Theodora of Wallachia (in about 1349) and marrying a converted Jew, also named Theodora.[6] The new marriage produced new sons, whom Ivan Alexander proceeded to crown co-emperors, Ivan Šišman in about 1356 and Ivan Asen V by 1359. Ivan Alexander's last surviving son from his first marriage, the co-emperor Ivan Sracimir, became effectively independent around 1356;[6] and Ivan Alexander's control over other powerful vassals, such as the rulers of Wallachia and Dobruja, who pursued their own foreign policies, was hardly stronger.[28]

From the middle of the 14th century, Bulgaria fell prey to the aspirations of the Angevin king Louis I of Hungary, who annexed Moldavia in 1352 and established a vassal principality there, before conquering Vidin in 1365,[6][23] and taking Ivan Sratsimir and his family into captivity.[6][28] 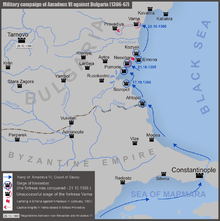 In the meantime Bulgarians and Byzantines had clashed again in 1364. In 1366, when Emperor John V Palaiologos was returning from his trip to the west, the Bulgarians refused to let him pass through Bulgaria. This stance backfired, as another Byzantine ally, Count Amadeus VI of Savoy, leading the Savoyard crusade, captured several Bulgarian maritime cities in retaliation, including Ankhialos (Pomorie) and Mesembria (Nesebǎr), though he failed to take Varna. Outmanoeuvred, Ivan Alexander was forced to make peace.[29]

The captured cities were turned over to the Byzantine Empire, while Emperor John V Palaiologos paid the sum of 180,000 florins to Ivan Alexander.[6] The Bulgarian emperor used this sum and territorial concessions to induce his at least de jure vassals Dobrotica of Dobruja[30] and Vladislav I of Wallachia[31][32] to reconquer Vidin from the Hungarians.[33] The war was successful, and Ivan Sracimir was reinstalled in Vidin in 1369, although the Hungarian king forced him to acknowledge his overlordship.[34]

The relatively successful resolution of the crisis in the northwest did nothing to help recover the losses in the southeast. To make matters worse, in 1369 (the date is disputed), the Ottoman Turks under Murad I conquered Adrianople (in 1363) and made it the effective capital of their expanding state. At the same time, they also captured the Bulgarian cities of Philippopolis and Boruj (Stara Zagora).[35] As Bulgaria and the Serbian princes in Macedonia prepared for united action against the Turks, Ivan Alexander died on February 17, 1371.[36] He was succeeded by his sons Ivan Sracimir in Vidin[23] and Ivan Šišman in Tǎrnovo,[23] while the rulers of Dobruja and Wallachia achieved further independence.

During Ivan Alexander's rule, the Second Bulgarian Empire entered a period of cultural renaissance, which is sometimes referred to as the "Second Golden Age of Bulgarian culture",[37][38] the original one being the rule of Simeon the Great.[39] A large number of Bulgarian monasteries and churches were constructed or renovated on the order of Ivan Alexander.[4][40] Mural portraits of him as a donor can be seen in the Bachkovo Monastery's ossuary and in the Rock-hewn Churches of Ivanovo.[41] Donor's deeds of Ivan Alexander prove that the monasteries of the Holy Mother of God Eleoussa and St Nicholas in Nesebǎr were reconstructed during that period,[6][41] as was the St Nicholas monastery near Pernik, according to a Hilandar monastery deed.[41][42] In addition, the tsar also initiated the construction of the Dragalevci and Kilifarevo monasteries.[6]

Literary activity also flourished during the reign of Ivan Alexander. Several important literary works were created in the period, such as the Middle Bulgarian translation of the Manasses Chronicle (1344–1345), currently preserved in the Vatican Secret Archives in Rome,[6][43] the richly illustrated Tetraevangelia of Ivan Alexander (1355–1356), now exhibited in the British Library,[44] the Tomić Psalter (1360), today in Moscow,[6] and the Sofia Psalter (1337).[45]

Ivan Alexander's rule was also marked by efforts to strengthen the position of the Bulgarian Orthodox Church by pursuing heretics and Jews.[46] He organized two anti-heretical church councils, in 1350 and 1359–1360,[47] that condemned various sects[6][46] such as the Bogomils, the Adamites and the Judaizers.[6][48]

The spiritual practice of hesychasm, a form of incantatory prayer, deeply influenced certain areas of the Eastern Orthodox world of the 14th century. A notable Bulgarian representative of the movement during Ivan Alexander's reign was Theodosius of Tǎrnovo.[49]

During this time, the Bulgarian Empire had trade relations with the Mediterranean maritime powers Venice, Genoa and Ragusa.[50] In 1353, Ivan Alexander issued a charter allowing Venetian merchants to buy and sell goods throughout Bulgaria after Doge Andrea Dandolo assured him they would observe the prior treaties between the two countries.[51]

In modern times, the rule of Ivan Alexander inspired Bulgarian national writer Ivan Vazov to write the novelette Ivan-Aleksandǎr[52] and the drama Kǎm propast (Towards an Abyss),[52] in both of which the tsar is the main character.

A piece of a garment signed by Ivan Alexander and interwoven with gold was discovered in a noble's grave near Pirot in the 1970s; today it is preserved in the National Museum of Serbia in Belgrade. It is the first find of its kind, demonstrating a medieval tradition attested in writing according to which Orthodox rulers would present their most eminent dignitaries with a piece of a garment they had worn.[53]

By his first wife Theodora of Wallachia (nun Teofana), a daughter of Basarab of Wallachia, Ivan Alexander had several children, including Ivan Sracimir, who ruled as emperor of Bulgaria in Vidin 1356–1397, associated emperors Michael Asen IV (co-ruled c. 1332–1354/5) and Ivan Asen IV (co-ruled 1337–1349).

By his second wife Sarah-Theodora, Ivan Alexander had several other children, which included Keraca Marija, who married the Byzantine Emperor Andronikos IV Palaiologos, Ivan Šišman, who succeeded as emperor of Bulgaria in Tǎrnovo 1371–1395, Ivan Asen V, associated as emperor of Bulgaria by 1359–1388?, a daughter called Thamar (Kera Tamara), who was married first to the despotēs Constantine (Konstantin), and then to Sultan Murad I[55] of the Ottoman Empire,[8] as well as two daughters named Desislava and Vasilisa.[8]