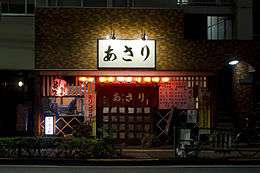 An izakaya in Gotanda, Tokyo. The signboard on the right shows a menu with regular dishes (left) and season's entry – nabe.(right)

An izakaya (居酒屋) (Japanese: [izakaja], ee-ZAH-ka-yah)[1] is a type of informal Japanese gastropub. They are casual places for after-work drinking. They have been compared to Irish pubs and early American saloons and taverns.[2]

The word "izakaya" entered the English language by 1987.[3] It is a compound word consisting of "i" (to stay) and "sakaya" (sake shop), indicating that izakaya originated from sake shops that allowed customers to sit on the premises to drink.[4] Izakaya are sometimes called akachōchin (red lantern) in daily conversation, because these paper lanterns are traditionally found in front of them. 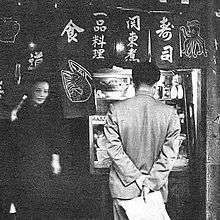 Historian Penelope Francks points to the development of the izakaya in Japan, especially in Edo and along main routes, as one indicator of the growing popularity of sake as a consumer good by the late eighteenth century.[5] Before the Meiji period people drank alcohol in sake shops standing. Some stores started using sake barrels as stools. After that snacks were added.[6]

An izakaya in Tokyo made international news in 1962 when Robert F. Kennedy ate there during a meeting with Japanese labor leaders.[7] 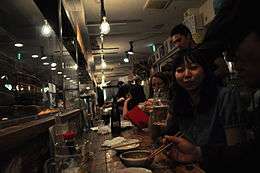 People at an izakaya, sitting by the bar facing to the kitchen

Izakayas are often likened to taverns or pubs, though there are a number of differences between these venues.[8][9][10]

Depending on the izakaya, customers sit on tatami mats and dine from low tables in the traditional Japanese style or sit on chairs and drink/dine from tables. Many izakaya offer a choice of both, as well as seating by the bar. Some izakaya restaurants are also tachi-nomi style, literally translated as "drinking while standing".[11]

Usually, the customer is given an oshibori (wet towel) to clean their hands with; the towels are cold in summer and hot in winter. Next a tiny snack/an appetizer called an otōshi in the Tokyo area or tsukidashi in the Osaka-Kobe area will be served.[12] This is local custom and usually charged onto the bill in lieu of an entry fee.

The menu may be on the table, displayed on walls, or both. Picture menus are common in larger izakaya. Food and drink are ordered throughout the course of the session as desired. They are brought to the table, and the bill is added up at the end of the session. Unlike other Japanese styles of eating, food items are usually shared by everyone at the table, similar to Spanish tapas.

Common formats for izakaya (as well as much other) dining in Japan are known as nomi-hōdai ("all you can drink") and tabe-hōdai ("all you can eat"). For a set price per person, customers can continue ordering as much food and/or drink as they wish, with a usual time limit of two or three hours.

Izakaya dining can be intimidating to non-Japanese with the wide variety of menu items and the slow pace. Food is normally ordered slowly over several courses rather than all at once. The kitchen will serve the food when it's ready rather than in formal courses like Western restaurants. Typically a beer is ordered when sitting down before perusing the menu. Quickly prepared dishes such as hiyayakko or edamame are ordered first, followed with progressively more robust flavors such as yakitori or kara-age, finishing the meal with a rice or noodle dish to fill up.[13] 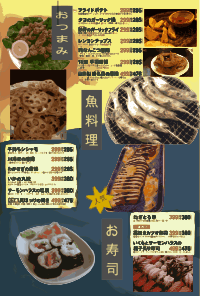 A mock-up of an izakaya style menu

There are a wide variety of izakaya offering all sorts of dishes. Items typically available are:[14][15]

Some establishments offer a bottle keep service, where a patron can purchase an entire bottle of liquor (usually Shōchū or whisky) and store the unfinished portion for a future visit.[17] 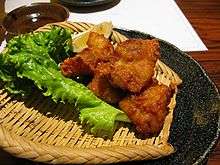 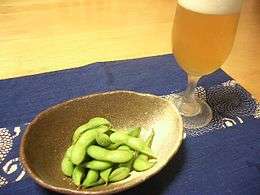 Izakaya food is usually more substantial than tapas or mezze. Many items are designed to be shared.

Rice dishes such as ochazuke and noodle dishes such as yakisoba are sometimes eaten at the end to round off a drinking session. For the most part, the Japanese do not eat rice or noodles (shushoku – "staple food") at the same time as they drink alcohol, since sake, brewed from rice, traditionally takes the place of rice in a meal.

Izakaya were traditionally down-to-earth places where men drank sake and beer after work;[19] this trend is complemented by a growing population of independent women and students. Many izakaya today cater to a more diverse clientele by offering cocktails and wines as well as improving the interior. Chain izakaya are often large and offer an extensive selection of food and drink, allowing it to host big, sometimes rowdy, parties. Watami, Shoya, Shirokiya, Tsubohachi, and Murasaki are some well known chains in Japan.[20] 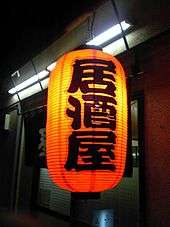 Akachōchin ("red lantern") with kanji "Izakaya" written on it

Akachōchin for nikomi (right) and nobori banner for nabe (center)

Izakayas are often called akachōchin ("red lantern") after the red paper lanterns that are traditionally displayed outside.[21] Today the term usually refers to small, non-chain izakaya. Some unrelated businesses that are not izakaya also sometimes display red lanterns.[22]

Cosplay izakaya became popular in the 2000s. The staff wears the costume and wait on customers. Sometime the cosplay izakaya run shows. Costumes include those for butlers and maids.[23][24]

Establishments specialising in oden are called oden-ya. They usually take the form of street stalls with seating and are popular in winter.

Robatayaki are where customers sit around an open hearth on which chefs grill seafood and vegetables. The fresh ingredients are displayed for customers to point at whenever they want to order.

Yakitori-ya specialise in yakitori.[25] The skewers are often grilled in front of customers.

In literature, TV drama and film

Izakaya appear in Japanese novels with adaptations to TV drama and film. They have also inspired manga and gekiga. A modern novel Izakaya Chōji (居酒屋兆治)[26] is an example where the main character manages an izakaya; in the film adaptation, Ken Takakura played the part of Chōji.[27] A TV drama was produced in 1992 on Friday Drama Theater, Fuji Television.[28]

Images of izakaya in jidaigeki novels and films reflect the modern drinking and dining style of today sitting at tables. This was not often seen in countryside – aside from station towns along kaidō highways in the 17th to mid-19th century. Capacities at izakaya were restricted in major cities in the period that jidaigeki TV shows and films/movies set in Edo.