James Hamilton Lewis (May 18, 1863 – April 9, 1939) was the first Senator to hold the title of Whip in the United States Senate. Lewis was born in Danville, Virginia, and also grew up in Augusta, Georgia. He was educated at the University of Virginia and studied law in Savannah, Georgia before he served in the Spanish–American War.

A close ally of President Woodrow Wilson, Lewis was a leader in getting much of Wilson's "New Freedom" legislation passed. Upon his defeat for reelection in '18, Lewis was offered the ambassadorship to Belgium by the President, but he declined and returned private legal practice in Chicago, Illinois. He eventually became a partner in the newly named Lewis, Adler, Lederer & Kahn (now known as Arnstein & Lehr, LLP) where he remained until he began his campaign for return to the United States Senate.[1] 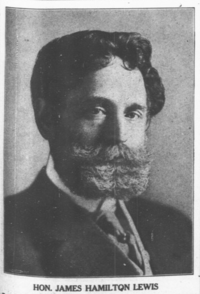 He would hold the Majority Whip position again from 1933 until his death in 1939. He was defeated for reelection to the Senate in 1918, but regained his seat in the election in 1930. He ran unsuccessfully for governor of Illinois in 1908 and 1920, and continued to serve as Minority Whip in the Senate during the Depression and the New Deal era. Lewis won his last Senate election in 1936, and died in office in 1939.

In 1932, Lewis went to the Democratic National Convention in Chicago, as the "favorite son" candidate of Illinois, at the behest of Chicago mayor Anton Cermak. Cermak's hope was to use Lewis to keep the Illinois delegates from supporting Franklin Delano Roosevelt, but Lewis later withdrew his name from consideration, and released his delegates, many of whom went to FDR and helped secure him the nomination.

Lewis was one of the first to befriend the new, and rather intimidated, Senator Harry S Truman. In 1935, during Truman's first few weeks in office, Lewis sat next to Truman and kindly said "Harry, don't start out with an inferiority complex. For the first six months you'll wonder how the hell you got here. After that you'll wonder how the hell rest of us got here."[3]

Lewis was known to be something of an eccentric in manner and dress, wearing spats well into the 1930s, and sporting Van Dyke whiskers and a "wavy pink toupee", but he was courtly in manner, and a talented orator. He was an authority on the U.S. Constitution and on foreign affairs, and a skillful legislative tactician. He died in office, and his funeral service was held in the Senate Chamber.

Lewis was buried in Abbey Mausoleum near Arlington National Cemetery. But it was demolished in 2001, and his remains were moved to an unknown location.