Ladda Tammy Duckworth (born March 12, 1968) is an American politician and member of the Democratic Party, serving as the U.S. Representative for Illinois's 8th congressional district since 2013, and is a Senator-elect for Illinois. She previously served as Assistant Secretary for Public and Intergovernmental Affairs in the United States Department of Veterans Affairs from April 24, 2009, to June 30, 2011, and as the Director of the Illinois Department of Veterans Affairs from November 21, 2006, to February 8, 2009. In the November 8, 2016, election, Duckworth defeated incumbent Senator Mark Kirk for his seat in the United States Senate.[1]

Duckworth is the first Asian American woman elected to Congress in Illinois, the first disabled woman to be elected to the U.S. House of Representatives, and the first member of Congress born in Thailand. Her father, an American, and her Thai-Chinese mother were working and living there at the time. Duckworth is the second Asian-American serving in the U.S. Senate after Mazie Hirono and next to Kamala Harris. An Iraq War veteran, Duckworth served as a U.S. Army helicopter pilot and suffered severe combat wounds, losing both of her legs and damaging her right arm. She was the first female double amputee from the war.[2] Having received a medical waiver, she continued to serve as a Lieutenant Colonel in the Illinois Army National Guard along with her husband, Major Bryan W. Bowlsbey, a signal officer and fellow Iraq War veteran, until her retirement from the Army in October 2014.[3]

Tammy Duckworth was born in Bangkok, Thailand, to Franklin and Lamai Sompornpairin Duckworth. Her American father, who died in 2005, was a U.S. Marine veteran who traced his family's American roots to the American Revolutionary War.[4] Her mother is Thai, of Chinese descent.[5] Because of her father's work with the United Nations and international companies in refugee, housing, and development programs,[6] the family moved around Southeast Asia. Duckworth became fluent in Thai and Indonesian, in addition to English.[7]

Duckworth attended Singapore American School, and for a few months in her senior year was at the International School Bangkok. The family settled in Hawaii when she was sixteen. Her father became unemployed for a time and the family relied on public assistance.[6] She graduated with honors from McKinley High School in Honolulu, Hawaii, in 1985, having skipped the ninth grade. She graduated from the University of Hawaii in 1989 with a Bachelor of Arts in political science, and later received a Master of Arts in international affairs from George Washington University.[8]

Following in the footsteps of her father, who served in World War II, and ancestors who served in the Revolutionary War,[5] Duckworth joined the Army Reserve Officers' Training Corps as a graduate student at George Washington University in 1990. She became a commissioned officer in the United States Army Reserve in 1992 and chose to fly helicopters because it was one of the few combat jobs open to women. As a member of the Army Reserve, she went to flight school, later transferring to the Army National Guard and entering the Illinois Army National Guard in 1996.[9] Duckworth also worked as a staff supervisor at Rotary International headquarters in Evanston, Illinois.[10][11]

Duckworth was working towards a Ph.D. in political science at Northern Illinois University, with research interests in the political economy and public health in southeast Asia, when she was deployed to Iraq in 2004.[10] She lost her right leg near the hip and her left leg below the knee[12] from injuries sustained on November 12, 2004, when the UH-60 Black Hawk helicopter she was co-piloting was hit by a rocket-propelled grenade fired by Iraqi insurgents.[13] She was the first female double amputee from the Iraq war.[2] The explosion "almost completely destroyed her right arm, breaking it in three places and tearing tissue from the back side of it".[14] The doctors "reset the bones in her arm and stitched the cuts" to save her arm.[14] Duckworth received a Purple Heart on December 3 and was promoted to Major on December 21 at the Walter Reed Army Medical Center, where she was presented with an Air Medal and Army Commendation Medal.[13] She retired from the Illinois Army National Guard in October 2014 as a lieutenant colonel.[15] She returned to school and completed a PhD in Human Services at Capella University in March 2015.[16]

The Daughters of the American Revolution erected a statue with her likeness, and that of the Revolution's Molly Pitcher in Mount Vernon, Illinois, in 2011.[4] The statue was erected in honor of female veterans.[17][4] 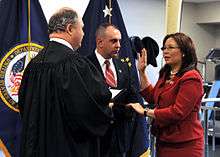 Duckworth being sworn in as Assistant Secretary of Public and Intergovernmental Affairs for the United States Department of Veterans Affairs, by Judge John J. Farley with her husband Bryan Bowlsbey beside her.

On November 21, 2006, several weeks after losing her first congressional campaign, Duckworth was appointed Director of the Illinois Department of Veterans Affairs by Governor Rod Blagojevich.[18][19][20] Duckworth served in that position until February 8, 2009. While she was Director, she was credited with starting a program to help veterans with post-traumatic stress disorder (PTSD), and veterans with brain injury.[21]

On September 17, 2008, Duckworth attended a campaign event for Dan Seals, the Democratic candidate for Illinois's 10th congressional district. Duckworth used vacation time, but violated Illinois law by going to the event in a state-owned van which was equipped for a person with physical disabilities. She acknowledged the mistake and repaid the state for the use of the van.[22][23] 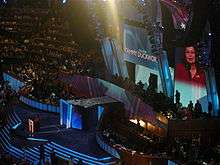 Duckworth speaks during the third night of the 2008 Democratic National Convention in Denver, Colorado.

In 2009, two Illinois Department of Veterans Affairs employees at the Anna Veteran's Home in Union County filed a lawsuit against Duckworth.[24] The lawsuit alleged that Duckworth wrongfully terminated one employee and threatened and intimidated another for bringing reports of abuse and misconduct of veterans when she was head of the Illinois Department of Veterans Affairs.[25] Duckworth is represented in the suit by the Illinois Attorney General's office.[26] The case was dismissed twice but refilings were allowed.[27] The court set a tentative trial date of August 2016 and rejected the final motion to dismiss.[28] The state announced that it had settled the case in June 2016 for $26,000 with no admission of wrongdoing.[27] Although the plaintiffs later indicated they did not want the settlement, the judge vacated the trial.[29][30]

Also in 2009, the Illinois Auditor General released an audit of the Veteran's Affairs department. Some issues noted by the audit predated Duckworth's tenure, while the majority of the audit covered Duckworth's tenure.[31] Findings of the audit included a fiscal year 2007 report that was not completed on time, failure to conduct annual reviews of benefits received by Illinois veterans, and failure to establish a task force to study the possible health effects of exposure to hazardous materials. The routine audit covered a two-year period, June 2006 to June 2008, and the findings were described by the auditor's department as "typical" in its audits.[32]

On February 3, 2009, Duckworth was nominated to be the Assistant Secretary of Public and Intergovernmental Affairs for the United States Department of Veterans Affairs.[33] The United States Senate confirmed her for the position on April 22.[34] Duckworth resigned from her position in June 2011 in order to launch her campaign for the U.S. House of Representatives in Illinois' 8th Congressional District.[35]

After long-time incumbent Republican Henry Hyde announced his retirement from Congress, several candidates began campaigning for the office. Duckworth won the Democratic primary with a plurality of 44%, defeating 2004 nominee Christine Cegelis with 40%, and Wheaton College professor Lindy Scott with 16%. During her 2006 campaign for U.S. Congress, Duckworth was endorsed by EMILY's List, a Democratic political action committee that supports abortion rights.[39] Duckworth was also endorsed by the Brady Campaign to Prevent Gun Violence and the Fraternal Order of Police.[40][41] In the Republican primary, Illinois Senator Peter Roskam ran unopposed. While she raised over $1 million more than Roskam, on November 7 Duckworth lost by 4,810 votes, receiving 49% to Roskam's 51%.[42]

In July 2011, Duckworth launched her campaign to run in 2012 for Illinois's 8th congressional district. Duckworth defeated former Deputy Treasurer of Illinois Raja Krishnamoorthi for the Democratic nomination on March 20, 2012, then faced incumbent Republican Joe Walsh in the general election.[43] Duckworth received the endorsement of both the Chicago Tribune and the Daily Herald.[44][45] Walsh generated controversy when in July 2012, at a campaign event, he accused Duckworth of politicizing her military service and injuries, saying "my God, that's all she talks about. Our true heroes, the men and women who served us, it's the last thing in the world they talk about." Walsh called the controversy over his comments "a political ploy to distort my words and distract voters" and said that "Of course Tammy Duckworth is a hero ... I have called her a hero hundreds of times."[46]

On November 6, 2012, Duckworth defeated Walsh 55%–45%.[47] She is the first disabled woman to be elected to the U.S. House of Representatives, and the first member of Congress born in Thailand.[48]

In the 2014 general election, Duckworth faced Republican Larry Kaifesh, a United States Marine Corps officer who had recently left active duty as a colonel.[49] Duckworth defeated Kaifesh with 56% of the vote.[50]

On April 3, 2013, Duckworth publicly returned 8.4% ($1,218) of her congressional salary for that month to the United States Department of Treasury in solidarity with furloughed government workers.[52]

On June 26, 2013, during a hearing of the House Oversight and Government Reform Committee, Duckworth received national media attention after questioning Strong Castle CEO Braulio Castillo on a $500 million government contract the company had been awarded based on Castillo's disabled veteran status.[53][54][55][56]

On March 30, 2015, Duckworth announced that she would challenge incumbent U.S. Senator Mark Kirk for his seat in the 2016 Senate election in Illinois.[57] Duckworth defeated fellow Democrats Andrea Zopp and Napoleon Harris in the primary election on March 15, 2016.[58]

During a televised debate on October 27, 2016, Duckworth talked about her ancestors' past serving in the United States military. Kirk responded, "I’d forgotten that your parents came all the way from Thailand to serve George Washington." The comment led to the Human Rights Campaign withdrawing their endorsement of Kirk and switching it to Duckworth, stating his comments were "deeply offensive and racist."[59][60]

On November 8, Duckworth defeated Kirk 55 percent to 40 percent to win the senator seat for Illinois.[61] Duckworth and Kamala Harris, who was also elected in 2016, are second and third female Asian American senators, after Mazie Hirono who was elected in 2013.[1]

Duckworth supports comprehensive immigration reform with a pathway to citizenship for those in the country illegally. She would admit 100,000 Syrian refugees into the United States.[64] 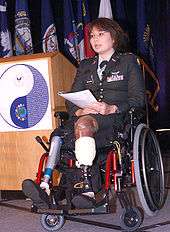 During her unsuccessful congressional campaign in 2006, Duckworth called on Congress to audit the estimated $437 billion spent on overseas military and foreign aid since September 11, 2001.[65]

On September 30, 2006, Duckworth gave the Democratic Party's response to President George W. Bush's weekly radio address. In it, she was critical of President Bush's strategy for the Iraq War.[66]

In October 2006, The Sunday Times reported that Duckworth agreed with General Sir Richard Dannatt, the British Army chief, that the presence of coalition troops was exacerbating the conflict in Iraq.[67]

After being shot down over Iraq, Duckworth was fitted for prosthetics and is now fully mobile. She helped establish the Intrepid Foundation to help injured veterans.[68]

In May 2010, Duckworth was awarded an honorary doctorate by Northern Illinois University.[71] In 2011, Duckworth was honored by Chicago's Access Living for her work on behalf of veterans with disabilities.[72]

Duckworth is married to Bryan Bowlsbey. The couple have a daughter, born in 2014.[73]