Lyman Trumbull (October 12, 1813 – June 25, 1896) was a United States Senator from Illinois during the American Civil War, and co-author of the Thirteenth Amendment to the United States Constitution.

Lyman Trumbull was born in Colchester, Connecticut, the grandson of the historian Benjamin Trumbull.[1] After graduating from Bacon Academy, he taught school from 1829 to 1833.[1]

At 20, he was hired as head of an academy in Georgia.[1] He studied (read the law) as a legal apprentice, and was admitted to the bar in Georgia. He practiced law in Greenville, Georgia until 1837, when he moved west to Alton, Illinois. His house in Alton, the Lyman Trumbull House, is a National Historic Monument.

Although elected to the United States House of Representatives in 1854, he was elected by the state legislature to serve in the United States Senate before he could take his seat. He served for nearly two decades, from 1855 through 1873. During this time, he claimed party affiliations with the Democrats, the Republicans, the Liberal Republicans, and finally the Democrats again.

On 16 December 1861, Trumbull asked the Senate to consider his resolution:

Resolved, That the Secretary of State be directed to inform the Senate whether, in the loyal States of the Union, any person or persons have been arrested and imprisoned and are now held in confinement by orders from him or his Department; and if so, under what law said arrests have been made, and said persons imprisoned.

Senator James Dixon said of the resolution that "it seems to me calculated to produce nothing but mischief."[2]

As chairman of the Judiciary Committee (1861–1872), he co-wrote the Thirteenth Amendment, which prohibited all kinds of slavery in the United States other than its use as punishment for crimes of which the party had been convicted; this became the sentence to "time at hard labor" that became assignable for certain crimes. It was also the constitutional loophole by which southern states abused convict lease labor, a practice lasting into the twentieth century. 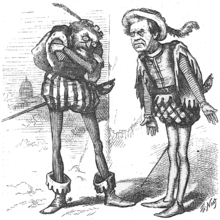 Political cartoon by Thomas Nast: Senators Schurz and Trumbull in a scene from Shakespeare's Richard III

During President Andrew Johnson's impeachment trial, Trumbull and six other Republican senators[3] were disturbed by their belief that Thaddeus Stevens and Benjamin Wade and those of similar position had manipulated the proceedings against Johnson in order to give a one-sided presentation of the evidence.[4] Trumbull, in particular, noted:

"Once set the example of impeaching a President for what, when the excitement of the hour shall have subsided, will be regarded as insufficient causes, as several of those now alleged against the President were decided to be by the House of Representatives only a few months since, and no future President will be safe who happens to differ with a majority of the House and two-thirds of the Senate on any measure deemed by them important, particularly if of a political character. Blinded by partisan zeal, with such an example before them, they will not scruple to remove out of the way any obstacle to the accomplishment of their purposes, and what then becomes of the checks and balances of the Constitution, so carefully devised and so vital to its perpetuity? They are all gone."[5]

All seven Senators, resisting the pressure imposed on them, broke party ranks and defied public opinion, voting for acquittal, although they knew their decision would be unpopular.[6] None was reelected. After the trial, Representative Ben Butler of Massachusetts conducted hearings in the House on widespread reports that Republican senators had been bribed to vote for Johnson's acquittal. Butler's hearings and subsequent inquiries revealed evidence that some acquittal votes were acquired by promises of patronage jobs and cash cards.[7] 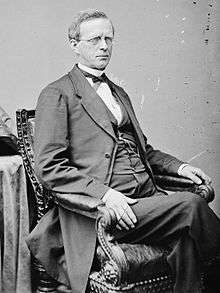 During the December 1871 congressional debate on the creation of Yellowstone National Park, Senator Trumbull, whose son Walter Trumbull was a member of the Washburn-Langford-Doane Expedition to Yellowstone in 1870, spoke in favor of the park concept:

"Here is a region of the country away up in the Rocky Mountains, where there are the most wonderful geysers on the face of the earth; a country that is not likely ever to be inhabited for the purpose of agriculture; but it is possible that some person may go there and plant himself right across the only path that leads to the wonders, and charge every man that passes along between the gorges of these mountains a fee of a dollar or five dollars. He may place an obstruction there and toll may be gathered from every person who goes to see these wonders of creation." [8]

After leaving the Senate in 1873, Trumbull set up a law practice in Chicago. He worked in private practice except for a brief period when he ran an unsuccessful campaign for governor (as a Democrat) in 1880. In January 1883, Trumbull was given a seat of honor at the dedication of the Pullman Arcade Theatre in George Pullman's company town.[9]

He became a Populist in 1894. According to Almont Lindsey's 1942 book, The Pullman Strike, Trumbull took part in defending Eugene Debs and other labor leaders of the American Railway Union, who had been convicted for violating a federal court injunction during the 1894 Pullman railroad strike. Trumbull was part of the three-member legal team, which included Clarence Darrow, when their habeas corpus case Ex parte In the Matter of Eugene V. Debs 'et al.' was heard by the US Supreme Court in 1895.[10][11] 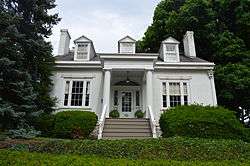 Front of Trumbull's house in Alton