This article is about the American singer. For Puerto Rican basketball player, see Javier Antonio Colón.

Javier Colon (alternately styled Javier Colón, born April 29, 1978) is an American singer-songwriter and musician. He has referred to his style of music as being "acoustic soul." He was a member of EmcQ and The Derek Trucks Band, and worked with many musicians before going solo. From 2002 to 2006, he was signed to Capitol Records, known as artist Javier. In 2006, however, the contract was terminated and Javier Colon became an independent artist with his own label, Javier Colon Music. In 2011, he was the winner of the inaugural season of the U.S. television show on NBC, The Voice, receiving $100,000 and signing a recording contract with Universal Republic Records. Javier Colon eventually decided to part ways with Universal Republic.

Colon was born in Stratford, Connecticut,[1] the son of a Dominican father and Puerto Rican mother,.[2] His father worked in a radio station.[3] He went to Frank Scott Bunnell High School in Stratford, Connecticut, where he started writing songs. Then he pursued a degree in music education from the University of Hartford's Hartt School. While studying, Javier also performed as vocalist and percussionist in EmcQ, a soul/funk band led by lead guitarist Ian McHugh and mainly dedicated to the legacy of Stevie Wonder.

When EmcQ opened a show for the soul-jazz trio Soulive, the group's guitarist, Eric Krasno, was impressed by Javier's vocals and recommended him to his friend Derek Trucks, who he knew was looking for a lead vocalist for The Derek Trucks Band.[2] Following his college graduation[2] and a successful audition in July 2000, Javier joined the band in August 2000.[4]

After touring with the band for nearly two years, Javier, then 24 years old, left the band in April 2002 to pursue a solo career,[4] having been signed by Capitol Records. He went on to release two albums with Capitol Records, the first the self-titled Javier in 2003, and the second entitled Left of Center in 2006.[2]

Since parting ways with Capitol Records, Javier has performed with such diverse acts as Joss Stone, Darius Rucker, the Indigo Girls, Stevie Nicks, Adam Levine, and Anthony Hamilton,[5] and recorded an EP on his own label, Javier Colon Music.[6] On stage, Javier's primary instruments are steel and nylon stringed acoustic guitars by Larrivée (guitar company) and Taylor Guitars. In 2009, he was featured as singer and songwriter for song, "October Sky", on Vanessa Williams's vocal album, The Real Thing.

On August 5, 2003 - Javier released his debut, self-titled album on Capitol Records. His first single, entitled "Crazy", debuted at #95 on Billboard Hot 100 and reached #42 on the Hot R&B/Hip-Hop Songs chart.[8] The second single, "Beautiful U R", did not have the same commercial success as his first release. The album reached #91 on the Billboard 200 albums chart and #18 on the R&B/Hip-Hop Albums chart. Javier consisted of mainly R&B songs, with a mixture of other genres such as jazz and funk, as well as a little influence of Javier's Latin roots. After the release, Javier's music style drew comparisons with the likes of Kenny Lattimore,[9] Brian McKnight, and Babyface. Pianist Mulgrew Miller and trumpeter Roy Hargrove performed on the final track, "October Sky", the only featured artists to appear on the album.[9]

On March 7, 2006 - Three years after his self-titled debut, Javier released his second album Left of Center.[11] The album title was used to demonstrate that Javier was not like the rest of the present Contemporary R&B artists. Javier did keep to his main R&B/Neo-soul genre, but again mixed in other styles and genres. Three singles from album were released: "Indecent Proposal", "Dance for Me", and "The Answer is Yes". None of them had any major success, and the album only reached #37 on Billboard's R&B/Hip-Hop Albums chart. Like Javier, Left of Center had minimal artist features, namely just fellow R&B artist Anthony Hamilton who appeared on the song "Count On Me". Although the album was not successful commercially, multiple reviews praised Javier for his unique style and willingness to do his own thing.

On August 3, 2010 - This six-song EP entitled "The Truth"[13] was released on Javier's own label. In the Album Notes for the EP at CD Baby, Javier is quoted as saying, "The Truth-Acoustic EP is part 1 of a larger project that I've been working on for over 3 years. I've taken a few songs that will be on my upcoming album Ok... Here's The Truth[14] and recorded them acoustically for this EP."

Starting April 26, 2011, Javier Colon[15] appeared as a contestant on NBC's reality talent show The Voice. The show, produced by John de Mol and Mark Burnett, features a group of contestants competing for a $100,000 grand prize and a Universal Republic recording contract.

On the first show, Javier sang the Cyndi Lauper classic "Time After Time".[16] All four judges, Adam Levine, Cee-Lo Green, Blake Shelton and Christina Aguilera, opted to take him as one of their finalists, with both Levine and Shelton giving him a standing ovation. He was the only contestant in blind auditions stage besides Jeff Jenkins to win all four judges. As judge Shelton was very late in hitting his "I Want You" button, despite urging by the other judges, show host Carson Daly jokingly said, "Oh Blake, you're an idiot!"[17]

In comments, Cee Lo Green called him a "soul brother" and said "it was perfect". Levine added: "It was so perfect, it was so tasteful too.. I wanna win this (expletive), so I really need, really need for you to pick me..." Blake added: "I'm clearly over my head here... and I'm already a fan of yours already". Javier eventually chose Adam Levine as his coach/mentor.[18]

On May 17, 2011, in the Battle Round (the Final 32), Javier's coach Adam Levine put him against Angela Wolff choosing that they both sing "Stand By Me",[19] originally by Ben E. King. As a result, Levine picked him to continue in the show in the live shows, as part of the Final 16.

On June 21, 2011, Javier Colon sang Coldplay's "Fix You".[21] The judges and the audience seemed to be thrilled that he took his signature hat off. Colon's coach, Adam Levine, said "You are the real deal. Competition or no, you have one of the best voices I've ever heard, ever!"

On June 22, 2011, Javier Colon advanced in the competition by accumulating the highest score on Team Adam. The highest score was determined by coach Adam Levine's score in combination with all America's votes. He beat out fellow team member Casey Weston to move on in the music competition.

On June 24, 2011, Javier Colon and the rest of The Voice "Final Four" contestants appeared on The Tonight Show with Jay Leno.[22] During each commercial break each contestant sang a song that he or she had previously performed on The Voice. During one of the commercial breaks, Javier sang "Time After Time". At the end of the broadcast, The Voice "Final Four" joined in song and performed The Beatles song "Come Together".[23]

On June 28, 2011, Javier Colon sang an original song titled "Stitch by Stitch".[24] The song was produced by himself, his coach Adam Levine and Rodney "Darkchild" Jerkins. Later in the show, Javier and his coach Adam Levine performed a cover together of "Man In the Mirror" by Michael Jackson.[25]

On June 29, 2011, Javier Colon and Stevie Nicks performed "Landslide" together. At the end of the show, the voting results were announced. With more votes than any other contestant, Javier Colon won the first season of NBC's "The Voice", receiving $100,000 in cash and a Universal Republic recording contract.[26]

Performances on The Voice 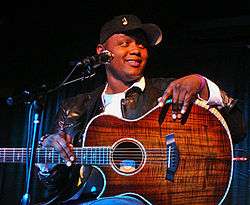 Colon with his guitar during a December 2014 performance

Javier Colon released his album Come Through For You on Universal Republic Records on November 21, 2011. The debut single from the album is "As Long As We Got Love" and features Natasha Bedingfield. The album also includes "Stand Up", a song that features his mentor during The Voice, Adam Levine, and a song "Raise Your Hand",[27] co-written by Season 8 American Idol Winner, Kris Allen.

A year after winning The Voice and being signed by Universal, Colon announced his departure from the record label through BuddyTV on June 7, 2012 stating the lack of support for his latest album Come Through for You, and his first after win, as the reason. In his statement he says: "I went into it with high hopes, as I believe everyone did. But when you pour your heart and soul into a new album that you think is really great, and your label who is supposed to support, market and promote your music does neither, it's really hard not to be upset. The truth is, we are all better off going our separate ways." Colon continues singing and looking for "a more mutually beneficial relationship".

In 2013, he launched the series Inside Voice, full title Inside Voice with Javier Colon, a weekly show broadcast on Back9Network that he co-hosts with Jenn Bosworth.[28] In the show, they discuss the season 5 of The Voice.

Concord Music Group has announced the addition of Javier Colon to their list of artists, and Colon is currently developing his debut album for the label due out in March 2015.[29]