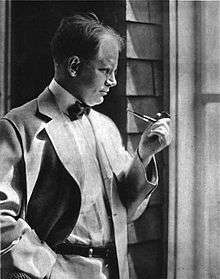 Darling was born in Norwood, Michigan, where his parents, Marcellus and Clara, had recently moved so that Marcellus could begin work as a minister. In 1886, the family moved to Sioux City, Iowa. Darling began college in 1894 at Yankton College in South Dakota and moved to Beloit College in Wisconsin the following year. There he became art editor of the yearbook and began signing his work with a contraction of his last name, D'ing, a nickname that stuck. 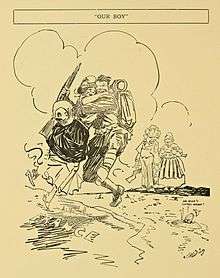 1917 cartoon portraying the U.S. arrival in France during World War I

In 1900, Ding became a reporter for the Sioux City Journal. Following his marriage to Genevieve Pendleton in 1906, he began work with the Des Moines Register and Leader. In 1911, he moved to New York and worked with the New York Globe but went back to Des Moines in 1913. Three years later, in 1916, he returned to New York and accepted a position with the New York Herald Tribune. By 1919, Darling returned a final time to Des Moines where he continued his career as a cartoonist, winning the Pulitzer Prize for Editorial Cartooning in 1924 and again in 1943.[1] His cartoons were published from 1917 to 1949 in the New York Herald Tribune. 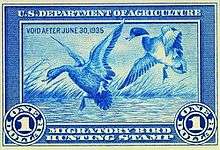 Darling penned some conservation cartoons and he was an important figure in the conservation movement. President Franklin Roosevelt appointed him to a blue ribbon Committee on Wildlife Restoration in 1934, FDR sought political balance by putting the Hoover Republican on the committee, knowing he was an articulate advocate for wildlife management.[2]

Darling initiated the Federal Duck Stamp program and designed the first stamp.[3] Roosevelt appointed him as head of the U.S. Biological Survey, forerunner of the U.S. Fish and Wildlife Service.[4] The J. N. "Ding" Darling National Wildlife Refuge on Sanibel Island in southwest Florida is named for him, as is the Lake Darling State Park in Iowa that was dedicated on September 17, 1950. Lake Darling, a 9,600-acre lake at the Upper Souris National Wildlife Refuge is also named his in honor.[5] More recently a lodge at the National Conservation Training Center near Shepherdstown, West Virginia was named in his honor.

Darling was elected as a member of the Boone and Crockett Club, a wildlife conservation organization, on December 13, 1934.[6]

Darling received the annual Pulitzer Prize for Editorial Cartooning, recognizing two of works for the Des Moines Register & Tribune (also published elsewhere) as the year's best, In Good Old USA (1923) and "What a Place for a Waste Paper Salvage Campaign" (1942).[1]

In 1960, the National Audubon Society awarded Darling the Audubon Medal for his conservation achievements.[7]