For the politician from Washington, see John T. McCutcheon (politician). 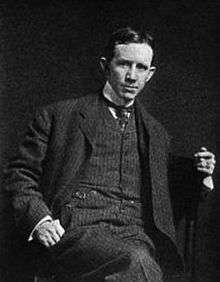 John Tinney McCutcheon (May 6, 1870 – June 10, 1949) was a Pulitzer Prize-winning American newspaper political cartoonist who was known as the "Dean of American Cartoonists".

He attended Purdue University, where he became a member of the Sigma Chi fraternity, and graduated in 1889 with a Bachelor of Science degree. At Purdue, he worked with typographer Bruce Rogers on the student newspaper and yearbook. On the Purdue campus, McCutcheon is memorialized in a coeducational dormitory, John T. McCutcheon Hall. The lobby displays an original of one of his drawings, a nearly life-size drawing of a young man. 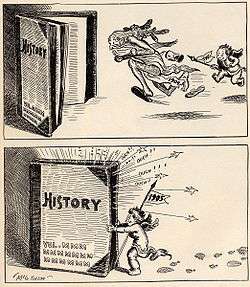 McCutcheon moved to Chicago, Illinois, where he worked at the Chicago Morning News (later named the Chicago Record) and then at the Chicago Tribune from 1903 until his retirement in 1946. In 1907, his famous cartoon, "Injun Summer," was first published. It would make annual appearances in the Tribune for decades.

During World War I, McCutcheon worked as a correspondent and combat artist, flying over battlefields in a bi-plane to research and then provide artwork about the war for publication.

From 1916 to 1979 the McCutcheon family owned Blue Lagoon Island, a cay off Nassau in the Bahamas. In 1917, McCutcheon married Evelyn Shaw, the daughter of his friend Howard Van Doren Shaw, despite being twenty-four years older. McCutcheon introduced Carl Sandburg to the Bahamian song The John B. Sails which subsequently became a standard.

He was the first President of the Chicago Zoological Society from 1921 until 1948, overseeing the construction, opening and early years of Brookfield Zoo. There was talk of renaming the zoo after him, but he refused the offer. He enjoyed traveling the world throughout his life.

McCutcheon received the Pulitzer Prize for Cartoons in 1932 for his Depression-era cartoon about a victim of bank failure. McCutcheon High School in his home county Tippecanoe is named in his honor. 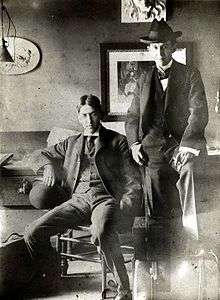