Jaya Hartono ( born October 20, 1963, in Medan, North Sumatera) is a football coach from Indonesia. He coached Persib Bandung from 2008 to 2010. He previously served as coach at Deltras Sidoarjo. He played football on clubs and the national team. On June 18, 2009, he offer to coach his former team Persik Kediri and Persebaya Surabaya[1] 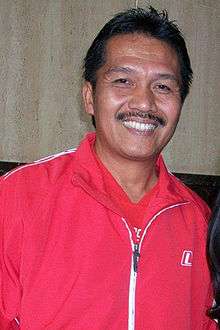 He played at the Galatama competition in the 1980s. He played on championship team Niac Mitra in 1987 and runner-up in 1989. He finished his career at Persik Kediri in 2000. He played for the following teams: