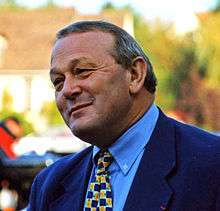 Jean-Marie Leblanc (born July 27, 1944 in Nueil-sur-Argent, now Nueil-les-Aubiers, Deux-Sèvres) is a French retired professional road bicycle racer who was general director of the Tour de France from 1989 to 2005, when he reached pensionable age and was succeeded by Christian Prudhomme.

Under his aegis, the Tour was modernised, most notably with the abandonment of the red and combination jerseys. He is also the Directeur Général Délégué d’Amaury Sport Organisation.

Leblanc was president of the AIOCC (Association Internationale des Organisateurs de Courses Cyclistes)[1] from 1989 through 2004.[2] In October 2007, he published his autobiography, Le Tour de ma Vie.

He took over from Jacques Duquesne as president of the JNP (Journalists Originating from Nord-Pas de Calais). Every Christmas it awards the 'Trophy of light' to whoever has best served the region that year. Every Spring it awards the 'Golden Pen' to the author of the best article of the region.

Leblanc is a fan of classical music and jazz and plays the clarinet. His ambition to play Mozart's clarinet concerto with an orchestra was realised on 27 June 2008 when he played at the Salle Philharmonique du Conservatoire de Liège (Belgium), with the Liège Philharmonic Orchestra conducted by Jean-Pierre Haeck.