The 2005 Tour de France was the 92nd edition of the Tour de France, one of cycling's Grand Tours. It took place between 2–24 July, with 21 stages covering a distance 3,593 km (2,233 mi). It has no overall winner—although American cyclist Lance Armstrong originally won the event, the United States Anti-Doping Agency announced in August 2012 that they had disqualified Armstrong from all his results since 1998, including his seven Tour de France wins from 1999–2005; the Union Cycliste Internationale has confirmed this verdict.

The first stages were held in the département of the Vendée, for the third time in 12 years. The 2005 Tour was announced on October 28, 2004. It was a clockwise route, visiting the Alps before the Pyrenees. Armstrong took the top step on the podium, for what was then the seventh consecutive time. He was accompanied on the podium by Ivan Basso and Jan Ullrich, but in 2012 Ullrich's results were annulled.[4] The points classification was won by Thor Hushovd, and the mountains classification by Michael Rasmussen.

The race was seen by 15 million spectators along the road, and by 2 billion viewers on TV.[5]

Commercial poster for the 2005 Tour

In 2005, the UCI had started the ProTour: 20 teams were given a ProTour licence, and were required to start in all ProTour races, which included the Tour de France. The Tour de France organisation was not happy with this rule, as they wanted to be able to decide which teams would join their race. While negotiations were still ongoing, it was decided to use the UCI rule for the 2005 Tour, so all 20 ProTour teams were automatically invited. The Tour organisation could invite one extra team with a wildcard, and used this to invite AG2R Prévoyance.[6] All teams were composed of nine cyclists, so 189 riders in 21 teams commenced the 2005 Tour de France. Of them, 155 riders finished.

The main favourite was (then) six-time winner Armstrong (now stripped of all his victories). Armstrong had had doubts if he should start the 2005 Tour,[7] but decided in February 2005 that he would race. His main rival Ullrich was happy with this decision, as he thought it would be a better race with Armstrong present.[6]

In previous years, Ullrich never had the full support of his team to win the general classification, as his team was also aiming for stage victories. In 2005, Erik Zabel, who had won the points classification six times, was left out of the team, and Ullrich was supported by Klöden and Vinokourov, who both had already reached the podium on the Tour.[6]

On the day before the Tour started, Ullrich crashed into his team director's car, but was not seriously injured.[6]

The Tour commemorated the death of Fabio Casartelli. During the 15th stage the riders passed the Col de Portet d'Aspet, where Casartelli died exactly 10 years earlier, in the 1995 Tour de France.[8] The Tour also commemorated the first time there was an official mountain climb in the Tour, the Ballon d'Alsace.[9] During the 9th stage this mountain was passed again, exactly 100 years after the first ascent in the Tour.

The traditional prologue on the first day was replaced by an individual time trial of more than twice the length of a standard prologue.[8] This stage crossed from the mainland of France to the Île de Noirmoutier. The most famous route to this island is the Passage du Gois, a road that is under water at high tide. This road was included in the 1999 Tour. Several of the favorites crashed there that year, and ended that stage 7 minutes behind the peloton. This year they took the bridge to the island.

Later in the race, there was one more time trial, on the penultimate day. Also, there were just three uphill finishes (Courchevel, Ax-3 Domaines and Pla d'Adet), a lower number than in previous years. The finish line of the last stage was, as has been since 1975, on the Champs-Élysées in Paris. 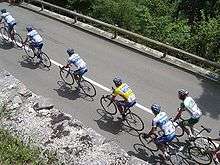 In Stage 1, David Zabriskie, a former team mate of Lance Armstrong, beat Armstrong by two seconds.[12] In the team time trial of stage 4, Zabriskie fell in the last kilometers, and Armstrong took over the lead.[12]

Armstrong initially refused to wear the yellow jersey in the fifth stage[n 3] but was forced by the Tour organisation, who threatened to remove him from the race.[6]

In the tenth stage, the start was moved from Grenoble to Froges.[10]

During the final ceremonies in Paris, Armstrong was allowed to talk to the crowds, the first time in the Tour's history that a winner was given this chance.[15] It has since become a regular occurrence.

During the race, 143 urine tests and 21 blood tests were conducted. None of them returned positive.[16] Still, there were fears that banned substances were being used; the boss of the Amore & Vita–Beretta team (not racing in the 2005 Tour) questioned the increase in velocities.[17]

In 2010, Hans Michael Holczer, the team boss of Gerolsteiner in 2005, said that the UCI had informed him that Leipheimer had shown blood values just under the doping limit, and that Holczer suspected that Leipheimer was doping. The UCI advised Gerolsteiner to find a reason to remove Leipheimer from the race, but Holczer refused, because his team was still facing bad publicity from a previous doping case.[18]

The top five of the general classification of 2005 would not compete the 2006 edition. Armstrong had retired after the 2005 Tour, and a few days before the 2006 edition, after it became public that (among others) Basso, Ullrich and Mancebo were under investigation in the Operacion Puerto doping case, the Tour organisation and team leaders decided to exclude all cyclists under investigation from joining the Tour. Vinokourov, fifth-placed in 2005, was not under investigation, but his team was reduced to five cyclists, below the minimal required amount of six, so he could also not compete.[19]

In February 2012, the Court of Arbitration for Sport found Ullrich guilty of being engaged in Fuentes' doping program, and decided that Ullrich's results since May 2005, including his results from the 2005 Tour de France, would be disqualified.[4]

Subsequent to Armstrong's statement to withdraw his fight against United States Anti-Doping Agency's (USADA) charges, on 24 August 2012, the USADA said it would ban Armstrong for life and stripped him of his record seven Tour de France titles.[20][21] Later that day it was confirmed in a USADA statement that Armstrong was banned for life and would be disqualified from any and all competitive results obtained on and subsequent to 1 August 1998, including forfeiture of any medals, titles, winnings, finishes, points and prizes.[1] On 22 October 2012, the Union Cycliste Internationale endorsed the USADA sanctions, and decided not to award victories to any other rider or upgrade other placings in any of the affected events.[2]

Óscar Pereiro was given the super-combativity award by the jury who chose him as the most attacking cyclist.[22]