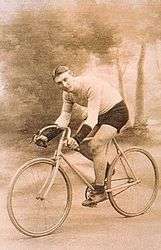 Jean Alavoine was a French professional cyclist, who won 17 stages in the Tour de France - only eight riders have won more stages[1] - and wore the yellow jersey for five days. In Daniel Marszalek's list of best road riders in history, he is ranked 96th.[2]