The Jefferson Literary and Debating Society (commonly known as the Jefferson Society or "Jeff Soc") is the oldest student organization at the University of Virginia, having been founded on July 14, 1825, in Room Seven, West Lawn. As such, it is one of the oldest collegiate societies in North America.[1] It is also the second oldest Greek-lettered organization in the United States, after Phi Beta Kappa. The Society's Greek-letters are Φ Π Θ, initials for Φίλοί, Πατρίς, θεός (philoi, patris, theos, or "friends, fatherland, God"). Its Latin motto, Haec Olim Meminisse Iuvabit, is taken from Virgil's Aeneid and roughly translated, "In the future it will be pleasing to remember these things."

The Society regularly meets on Friday evenings at Hotel C in the Academical Village, referred to as "Jefferson Hall", "Jeff Hall", or simply "The Hall". Room Seven, West Lawn, is also maintained by the Jefferson Society, selecting a Fourth Year student to live there. Their main event is the Speaker Series, inviting individuals from various areas to address students, but they also host formal social events including Wilson's Day, the Restoration Ball, and Founder's Day, first held in 1832.

Membership in the Society grew rapidly in the early years after its founding. By 1855, the University of Virginia was the second largest University in the nation after Harvard University, enrolling 645 students. That school year, the Society admitted 155 new members: nearly a quarter of the student body of the University.

In the hotheaded antebellum years, the Society could become raucous. Its elections were condemned by the Faculty for "such turbulence as to degrade the reputation of the University."[2] An especially coveted honor was to be selected as "final orator," a post apparently comparable to that of a valedictorian today.

The Society played a key role in establishing student journalism at the University, founding the University Magazine as early as 1856.[3] Later known as the Virginia Spectator, the paper played a major part in University life for a century, with its profile ranging from high seriousness to satire, until being shut down by the president of the University in the late 1950s for obscenity.[4] The Jefferson Society sponsored the magazine for many decades.[5] 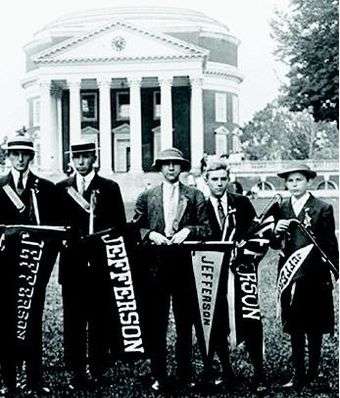 Society Members on the Lawn

Thomas Jefferson turned down an invitation for honorary membership in an August 12, 1825 letter, citing his need to avoid altering his relationship with the University and its students.[12]