Born in 1862 in London, he was the son of one of the most powerful politicians in the Prussian Kingdom. While Foreign Minister for Prussia, his father Count Albrecht von Bernstorff had earned the ire of Prince Bismarck in the Prussian constitutional crisis of 1859-1866. Overestimating his political strength, von Bernstorff resigned in a spat over the constitution with the expectation to force his will on the Prussian government. However, the Emperor accepted Bernstorff’s miscalculated challenge and appointed Otto von Bismarck chancellor and foreign minister. For the rest of his life, Count Albrecht von Bernstorff would criticize Bismarck’s Machiavellian style of governing. In 1862, the elder Bernstorff served as ambassador at the Court of St James's. For the next eleven years young Bernstorff grew up in England until his father’s death in 1873. After moving back to Germany Johann von Bernstorff went to the humanistic gymnasium in Dresden from which he graduated with a baccalaureate in 1881.

While von Bernstorff’s dream had always been to pursue a diplomatic career, the family feud with Bismarck made an appointment to the diplomatic service impossible.[1] As a result, he joined the Prussian Army for the next eight years, serving in an artillery unit in Berlin.

After being elected a member of the Reichstag, he finally succeeded in convincing the Bismarcks to settle the dispute with the long dead father.[2] In 1887, von Bernstorff married Jeanne Luckemeyer, a German-American.[3] She was a native of New York City and daughter of a wealthy silk merchant.[4]

His first diplomatic assignment was Constantinople where he served as military attaché. From 1892 to 94 he served at the German embassy in Belgrade. After a brief assignment to St. Petersburg (1895–97), von Bernstorff became counselor of the embassy in London (1902–06). Bernstorff's diplomatic skills were noted in Berlin throughout the First Moroccan Crisis in 1905. He then served as consul general in Cairo (1906–08).[5]

Despite the problems his family had with the Bismarcks, von Bernstorff basically agreed with Bismarck’s policies, in particular with the decision to found the German Reich without Austria in 1871. As a diplomat, von Bernstorff adamantly supported Anglo-German rapprochement and considered the policies of Wilhelm II “reckless.”[6]

Ambassador to the United States 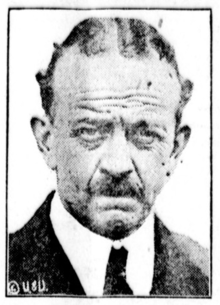 In 1908, von Bernstorff was appointed the German ambassador to the United States.[8]

He was recalled to Germany on July 7, 1914, but returned on August 2 upon the outbreak of the First World War. It was later revealed that he had been recruited into intelligence work and ordered to assist the German war effort by all means necessary. He was also provided with a large slush fund to finance these operations. He began with attempts to assist German-Americans who wished to return home to fight by forging passports to get them through the Allied blockade of Germany.

Publicly, Bernstorff's ambassadorship in Washington was characterised by a diplomatic battle with the British ambassador, Sir Cecil Spring Rice, with both men attempting to influence the American government's position regarding the war.[9] Later, however, as the blockade began to prevent American munitions manufacturers from trading with Germany, the ambassador began financing sabotage missions in order to obstruct arms shipments to Germany's enemies. Some of the plans included destroying the Welland Canal, which circumvents Niagara Falls. This was attempted in September 1914, but failed. It was also in 1914 that the German diplomatic mission began supporting the expatriate Indian movement for independence.

Bernstorff was assisted by Captain Franz von Papen (who would later be Chancellor of Germany) and Captain Karl Boy-Ed, a naval attaché. The commercial attaché, Heinrich Albert, was the finance officer for the sabotage operations. Papen and the German consulate in San Francisco are known to have been extensively involved in the Hindu German Conspiracy, especially in the Annie Larsen gun running plot. Although Bernstorff himself officially denied all knowledge, most accounts agree this was a part of the German intelligence and sabotage offensive in America against Britain, and Bernstorff was among those intricately involved. Following the capture of the SS Annie Larsen and confiscation of its cargo, Bernstorff made efforts to recover the $200,000 worth of arms, insisting they were meant for Colonel Paul von Lettow-Vorbeck in German East Africa. This was futile, however, and the arms were auctioned off.

In December of the same year, Bernstorff received a cable from the German Foreign Office instructing him to target the Canadian railways. On January 1, 1915, the Roebling Wire and Cable plant in Trenton, New Jersey was blown up. On January 28, an American merchant ship carrying wheat to Britain was sunk. On February 2, 1915, Lt. Werner Horn was captured following the Vanceboro international bridge bombing.

In 1915, Bernstorff also helped organize what became known as the Great Phenol Plot, an attempt to divert phenol from the production of high explosives in the United States (which would end up being sold to the British), and at the same time prop up several German-owned chemical companies that made aspirin and its precursor, salicylic acid. In September 1915, his agents attempted to influence the negotiations between American banks and the Anglo-French Financial Commission, but failed to prevent an agreement being reached.

In July 1916, the Black Tom explosion was the most spectacular of the sabotage operations.

Some of Bernstorff's other activities were exposed by the British Secret Service when they obtained and distributed to the press a photograph of him "in a swimming costume with his arms around two similarly dressed women, neither of whom was his wife".[10]

Bernstorff was returned home on February 3, 1917, when Woodrow Wilson severed diplomatic relations with Germany after the resumption of unrestricted submarine warfare. Upon receiving the news, Colonel Edward M. House wrote to him, "The day will come when people in Germany will see how much you have done for your country in America."

In 1910, Brown University had conferred an honorary Doctor of Laws degree on Bernstorff. At the school's commencement in 1918 (while World War I was going on), university president William Faunce read a resolution of the board of fellows revoking the degree, because "while he was Ambassador of the Imperial German Government to the United States and while the nations were still at peace, [Bernstorff] was guilty of conduct dishonorable alike in a gentleman and a diplomat."[11]

Ambassador to the Ottoman Empire

He assumed his position as ambassador to the Ottoman Empire in 1917. Bernstorff conceded that the Ottoman policy against the Armenians was one of exterminating the race.[12] Bernstorff provided a detailed account of the massacres in his memoirs entitled, Memoirs of Count Bernstorff. In his memoirs, Bernstorff recounts a conversation that he had with Talat Pasha after the massacres were concluded: "When I kept on pestering him about the Armenian question, he once said with a smile: 'What on earth do you want? The question is settled, there are no more Armenians.'"[12] 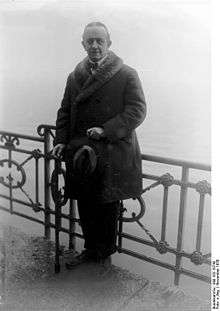 Bernstorff in 1930 at Geneva

In 1926, he became the Chairman of Kurt Blumenfeld's Zionist German Pro-Palestine Committee (Deutsches Pro-Palästina Komitee) to support the foundation of a Jewish State in Palestine[14] From 1926 to 1931 he was the chairman of the German delegation to the Preparatory World Disarmament Conference.[5]

Bernstorff, who was explicitly mentioned by Hitler as one of those men bearing "the guilt and responsibility for the collapse of Germany",[15] left Germany in 1933 after the Nazis rose to power and moved to Geneva, Switzerland, where he died on October 6, 1939.