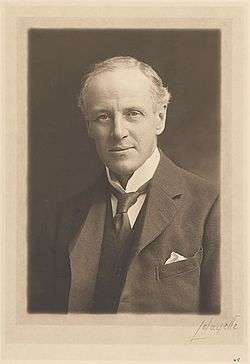 Sir Sidney Arthur Taylor Rowlatt KC KCSI PC (20 July 1862 – 1 March 1945) was an English lawyer and judge, best remembered for his controversial presidency of the Rowlatt Committee, a sedition committee appointed in 1918 by the British Indian Government to evaluate the links between political terrorism in India, especially Bengal and the Punjab, and the German government and the Bolsheviks in Russia. The committee gave rise to the Rowlatt Act, an extension of the Defence of India Act 1915.

Rowlatt was the son of A. H. Rowlatt of Alexandria. He was educated at Fettes College and King's College, Cambridge where he was a distinguished classics scholar.[1] After graduation, he became a fellow of his college and taught classics for a while at Eton where he was popular with his students.

He decided to take up the law and was called to the Bar by the Inner Temple in 1886. He joined the Oxford circuit but made slow progress, devilling for Robert Finlay. Rowlatt married Elizabeth Hemmingway in 1890 and the couple had four sons and two daughters. When William Danckwerts took silk in 1900, the post of junior counsel to the Inland Revenue fell vacant and Finlay recommended Rowlatt. Then, in 1905 Finlay, now Attorney-General, gave him the post of Treasury devil, a role in which Rowlatt excelled with his energy and affability. He became a bencher of the Inner Temple in 1906 and later its Treasurer.

Rowlatt was appointed Recorder of Windsor and, in 1912, a judge of the King's Bench Division of the High Court. He was a courteous and scholarly judge, quick to see a point and unafraid to make up his mind. In 1918 he chaired the inquiry into "Criminal conspiracies connected with revolutionary movements in India", the Rowlatt Committee. The inquiry led to the Rowlatt Act.

Rowlatt also heard murder trials, including that of George Stagg, who was found guilty of the murder of Aston Villa footballer, Tommy Ball in November 1923.[2]

He retired in 1932 and was sworn of the Privy Council, sitting several times in the Judicial Committee. He chaired the Royal Commission on Betting (1932–33) and during World War II, he sat as chairman of the General Claims Tribunal.