pronunciation ; Bengali: রাসবিহারী বসু Rashbihari Boshu; 25 May 1886 – 21 January 1945) was a revolutionary leader against the British Raj in India and was one of the key organisers of the Ghadar Revolution and later, the Indian National Army.

Bose was born in Subaldaha village, Burdwan, in the province of Bengal. He was educated in Chandannagar, where his father, Vinodebehari Bose, was stationed. He later earned degrees in the medical sciences as well as in Engineering from France and Germany.

Though interested in revolutionary activities from early on in his life, he left Bengal to shun the Alipore bomb case trials of (1908). At Dehradun he worked as a head clerk at the Forest Research Institute. There, through Amarendra Chatterjee of the Jugantar led by Jatin Mukherjee (Bagha Jatin), he secretly got involved with the revolutionaries of Bengal and, thanks to Jatindra Nath Banerjee alias Niralamba Swami, the earliest political disciple of Sri Aurobindo, he came across eminent revolutionary members of the Arya Samaj in the United Provinces (currently Uttar Pradesh) and the Punjab.[1] Originally Rash Behari Bose was born and lived in Chandannagar, Hooghly, West Bengal.

Following the attempt to assassinate Lord Hardinge, Rash Behari was forced to go into hiding. The attempt was made on 12 December 1912 after Lord Hardinge was returning from the Delhi Darbar of King George V. He was attacked by Vasant Kumar Vishwas a disciple of Amrendar Chattarjee, but he missed the target and failed. Bose was hunted by the colonial police due to his active participation in the failed assassination attempt (actually Bose's aim was to prove to the world that Indians do not accept the subjection of his country to foreign rule by consent, but by force of military power, which was successful. Otherwise he had no personal enmity with Lord Hardinge) directed at the Governor General and Viceroy Lord Charles Hardinge in Delhi. He returned to Dehra Dun by the night train and joined the office the next day as though nothing had happened. Further, he organised a meeting of loyal citizens of Dehradun to condemn the dastardly attack on the Viceroy.

Lord Hardinge, in his My Indian Years, described the whole incident in an interesting way. During the flood relief work in Bengal in 1913, he came in contact with Jatin Mukherjee in whom he "discovered a real leader of men," who "added a new impulse" to Rash Behari's failing zeal.[2] Thus during World War I he became extensively involved as one of the leading figures of the Ghadar Revolution that attempted to trigger a mutiny in India in February 1915. Trusted and tried Ghadrites were sent to several cantonments to infiltrate into the army. The idea of the Ghadar leaders was that with the war raging in Europe most of the soldiers had gone out of India and the rest could be easily won over. The revolution failed and most of the revolutionaries were arrested. But Rash Behari managed to escape British intelligence and reached Japan in 1915. 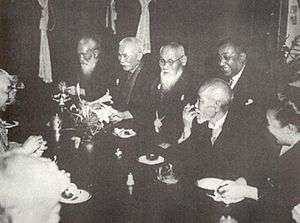 A dinner party given to Bose in his honour by his close Japanese friends, including Mitsuru Tōyama, a right-wing nationalist and Pan-Asianism leader (centre, behind the table), and Tsuyoshi Inukai, future Japanese prime minister (to the right of Tōyama). Behind Tōyama is Bose. 1915.

In Japan, Bose found shelter with various Pan-Asian groups. From 1915–1918, he changed residences and identities numerous times, as the British kept pressing the Japanese government for his extradition. He married the daughter of Aizō Sōma and Kokkō Sōma, the owners of Nakamuraya bakery in Tokyo and noted Pan-Asian supporters in 1918, and became a Japanese citizen in 1923, living as a journalist and writer. It is also significant that he was instrumental in introducing Indian-style curry in Japan. Though more expensive than the usual "British-style" curry, it became quite popular, with Rash Bihari becoming known as "Bose of Nakamuraya".

Bose along with A M Nair was instrumental in persuading the Japanese authorities to stand by the Indian nationalists and ultimately to officially actively support the Indian independence struggle abroad. Bose convened a conference in Tokyo on 28–30 March 1942, which decided to establish the Indian Independence League. At the conference he moved a motion to raise an army for Indian independence. He convened the second conference of the League at Bangkok on 22 June 1942. It was at this conference that a resolution was adopted to invite Subhas Chandra Bose to join the League and take its command as its president.

The Indian prisoners of war captured by the Japanese in the Malaya and Burma fronts were encouraged to join the Indian Independence League and become the soldiers of the Indian National Army (INA), formed on 1 September 1942 as the military wing of Bose's Indian National League. He selected the flag for the Azad Hind movement, and handed over the flag to Subhas Chandra Bose . But although he handed over the power, his organisational structure remained, and it was on the organisational spadework of Rash Behari Bose that Subhas Chandra Bose later built the Indian National Army (also called 'Azad Hind Fauj'). Prior to being killed near the end of World War II, the Japanese Government honoured him with the Order of the Rising Sun (2nd grade). In 2013 The ashes of Rash Behari Bose were brought to Chandannagar from Japan by the mayor of Chandannagar and immersed at the Hooghly river banks.