It currently consists of ten buildings and has occupied the present site in Manhattan since 1905, when it was known as the German Hospital. The hospital is located on a city block bounded on the north and south by East 77th and East 76th Streets, and on the west and east by Park Avenue and Lexington Avenue. The New York City Subway's 77th Street station is on the same block.

In 2007, the Manhattan Eye, Ear and Throat Hospital was incorporated into Lenox Hill Hospital. The hospital's Executive Director is Dennis Connors. 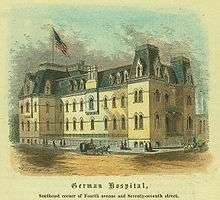 The hospital continued to grow, and in 1884 moved to 137 Second Avenue, at East 8th Street, currently the Ottendorfer Branch of the New York Public Library. The new three-story building was a gift of Anna Ottendorfer and Oswald Ottendorfer, who ran the German-language newspaper New Yorker Staats-Zeitung. By 1887, the German Hospital and Dispensary was treating 28,000 patients annually, mostly from the local Little Germany neighborhood around First and Second Avenues below 14th Street.[1]

The hospital opened its nurses' training school in 1887 with four young German-American women forming the first class. Until then, nursing attendants and charge nurses had been brought over from Germany.

In 1865, the German Hospital had started leasing a site on the Upper East Side, at Fourth Avenue (now Park Avenue) and East 77th Street, a swampy, goat-ridden tract of land for which the hospital paid an annual rent of $1. The site remained mostly unused until a four-story building was constructed there in December 1888 in order to add to the capacity from its downtown location. A five-story training school for nurses was added in February 1894 at East 77th Street and Lexington Avenue. The New York Times noted in an 1899 editorial, "to be a graduate nurse of the German Hospital is a distinction and recommendation for good nursing."

The hospital moved to the East 77th Street location entirely in 1905, about the same time that Manhattan's German community was increasingly abandoning Little Germany for the Yorkville neighborhood, within walking distance of the new hospital. New York City deeded the square block on to the hospital for $5,000 in 1907. The building on Second Avenue was sold to another medical charity, the German Polyklinik, founded in 1883, which later changed its name to Stuyvesant Polyclinic Hospital.[2]

In July 1918, the German Hospital was renamed Lenox Hill Hospital, tying it to the Lenox Hill section of the Upper East Side, in an effort to distance the institution from America's enemy in World War I. A movement in 1925 to restore the hospital to its former name, to appeal to potential donors of German descent, was eventually rejected by the board of trustees. It was said at the time that about 95 percent of the doctors, nurses and other employees of the hospital spoke German.

The hospital rejected a proposed merger with Columbia University in February 1919.

In April 1931, the hospital completed a new $2.5 million 11-story building, with a facade made of light brick with limestone trim, on the 76th Street side of the hospital, replacing two apartment houses and several workshops. The pioneering children's division, founded by Dr. Abraham Jacobi, was housed on the 11th floor, with other patient rooms on the fourth through ninth floors, and operating rooms on the 10th floor. Another two-story building, containing a ward service, lecture hall and swimming pool was added next to the main building on the 76th Street side in 1936, at a cost of $150,000.

The entrance to the Sherman and Gloria H. Cohen Plaza and Gallery at 125 East 76th Street

By 1939, the hospital had annually treated 12,115 patients with bed care, and another 23,099 visited the dispensary for treatment. Adding accident room patients, the hospital treated over 53,000 people in 1939. Because some care was given for free or part-pay, the hospital often ran an operating deficit, just as it did in 1939, when it lost $163,029, down from an over $200,000 loss the previous year, 1938. The hospital's operating loss grew to $284,692 in 1945, then a record high. Due to a lack of funds, an anticipated additional new building was delayed for over 20 years, when a Second Century Development Program, designed to raise $10 million, was led by the hospital's president, James Wickersham. Finally, on the Hospital's 100th anniversary, in 1957, it opened a $4.5 million 12-story building on Park Avenue at East 77th Street, with a glass and aluminum facade, and a capacity of 180 patient beds. The new building, named the Wollman Pavilion, also housed a mental health unit, and an entire floor was allocated for research on speech and hearing disorders, epilepsy and hemophilia. In 1964, the Charles R. Lachman Community Health Center was added on the south side of East 77th Street, between the Wollman Pavilion and the William Black Hall of Nursing, which opened in 1962 (the School of Nursing closed in 1973). The Hospital opened its largest building, at 12 stories, in 1976, located at Park Avenue and 76th Street, replacing the Ottendorfer Dispensary, at a cost of $20 million. The modern brick masonry structure, with a fortresslike facade, stood in stark contrast in architectural style of the rest of hospital's buildings. The new building added 180 patient beds, for an overall capacity of 690 beds.

The hospital sent a medical unit to England in 1943 to maintain station hospitals for military personnel. Throughout the remainder of World War II, hospital staff members served in all theaters of war, including with combat forces in the European theater of operations after D-Day

In 1998, a jury awarded $49 million in an obstetrics case against the hospital, which was one of the largest medical malpractice verdicts in New York City at that time.

In 2007, Lenox Hill Hospital was ranked among the nation's top 50 hospitals in Heart and Heart Surgery (#15), Orthopedics (#26) and Neurology & Neurosurgery (#45) according to U.S. News & World Report's annual survey on America's Best Hospitals.

On May 19, 2010, the hospital announced that an agreement had been finalized for it to join the North Shore-LIJ Health System.

In 2014, the old St. Vincent Hospital building that suddenly closed back in 2010, became Lenox Hill HealthPlex, Manhattan's first freestanding emergency room. It is apart of the North Shore-LIJ Health System Division. This facility is located at 30 7th Ave between W. 12th and W. 13th Street, just walking distance from the 14th Street train station on the west side. This emergency room just like any other, that is apart of an Hospital sees patients whether they come as a walk-in or via an ambulance. Upon visiting this facility if they are unable to treat you and or you need long term care, you are then transferred to an actual hospital via an ambulance. Since Lenox Hill HealthPlex is apart of Lenox Hill Hospital, patients at times gets admitted directly and is brought straight to the main part of the hospital to a bed. This facility also does labs if it is required and it came be done as a walk-in. They also does CT and X-ray and if they are unable to do it, lets say an MRI, they have a outside facility that can do it, just like any other emergency room. Lenox Hill HealthPlex has private rooms so that patients can have their privacy, patients are treated regardless if they are insured or not. In 2015, North Shore-LIJ became Northwell Health and less than a year later Lenox Hill HealthPlex became Lenox Health Greenwich Village. It is the official health and wellness partner of Chelsea Piers and Entertainment Complex.[4] 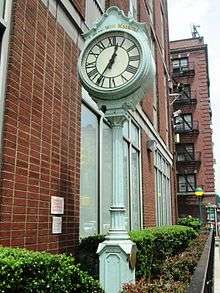 The hospital became a leading innovator in medical care, developing and implementing many standards and practices that would later become indispensable components of modern medicine.

In 1897, the hospital installed one of the first X-ray machines in America. Ten years later, the hospital established the first physical therapy department in the country. In response to what was becoming a growing public health threat, it was the first general hospital in the U.S. to open a tuberculosis division. In 1973, the Nicholas Institute of Sports Medicine and Athletic Trauma became the first hospital-based center in the nation for the study of sports medicine.

In 1978, the first coronary angioplasties in the country were performed at Lenox Hill Hospital and at St. Mary's Hospital in San Francisco, California. In 1994, Lenox Hill Hospital surgeons pioneered minimally invasive direct coronary artery bypass surgery and in 2000, the hospital was the first in the U.S. to perform endoscopic radial artery harvesting. In 2003, the first drug-coated stent approved by the U.S. Food and Drug Administration (FDA) was implanted at the hospital. It is also one of the first hospitals in the nation to acquire a state-of-the-art robotic cardiac system, which allows surgeons to perform minimally invasive heart-bypass surgery.

Continuing its tradition of care during times of crisis, the hospital assembled a disaster team to care for casualties of the September 11 attacks at the World Trade Center in 2001. Emergency crews were sent to Ground Zero and supply runs to the area were conducted to aid the rescue workers. The hospital set up a free walk-in Crisis Counseling Center, staffed by the hospital's psychiatrists and therapists and the blood donor center was expanded to accommodate the thousands of people who came to the hospital to give blood.

In 2007, the hospital celebrated its 150th anniversary, and expanded its dedication to the New York City community by opening a new, state-of-the-art Emergency Department, the Anne and Isidore Falk Center for Emergency Care at Lenox Hill Hospital.

Many important milestones in the advancement of medical knowledge have been made at the hospital, including:

Many medical pioneers were early members of the hospital's attending staff. Among them were:

Notable deaths at the hospital