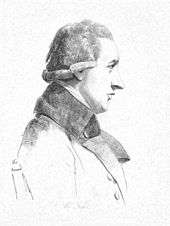 John Fisher (1748, Hampton – 8 May 1825, Seymour Street, London), D.D. was a 19th-century Church of England bishop, serving as Bishop of Exeter then Bishop of Salisbury.

Painting of Osmington by John Fisher

John Fisher was the eldest son of Rev. John Fisher, Rector of Calbourne, Isle of Wight. He was educated at Peterborough, St Paul's School and Peterhouse, Cambridge. Graduating BA as 10th Wrangler in 1770, he gained his MA and became a Fellow of St John's College in 1773.[1]

Fisher served as a chaplain to King George III. In 1786 he was made Canon of St George's Chapel, Windsor, and in 1805 he was appointed Preceptor to Charlotte, Princess Royal.[2] He had earlier served as Preceptor to her brother Prince Edward, Duke of Kent. Dr. Fisher also served as Chancellor of the Most Noble Order of the Garter. 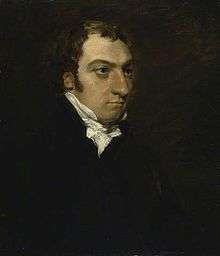 He is also notable for his friendship with the painter John Constable, presiding at Constable's wedding and commissioning his Salisbury Cathedral. Over time, Rev. Fisher became Constable's biggest patron and a close friend. Fisher himself was often called 'King's Fisher,' in reference to his connection to the Royal Family, and his patronage was a valuable asset to Constable.

Later Rev. Fisher introduced the painter to Fisher's nephew, another Rev. John Fisher, the son of Dr. Fisher's brother Philip, Master of the Charterhouse School of London. The younger Rev. Fisher (later the Archdeacon of Berkshire) became the painter's best friend and another important patron. The painter spent his honeymoon at the younger Rev. Fisher's home in Osmington, Dorset. Relations between the Fisher families and the painter were such that biographer C. R. Leslie based much of his work on Constable – Memoirs of the Life of John Constable of 1843 – on correspondence between the Fishers and the painter.[3]

On Rev. Dr. Fisher's death, Constable commemorated him in a painting with a rainbow alighting on Fisher's house in the Cathedral Close, now Leaden Hall School for Girls Leaden Hall School. He is buried in St George's Chapel, Windsor. There is a funerary monument to him in Salisbury Cathedral.

The Right Rev. Dr. John Fisher married Dorothea (Scrivener) Fisher, daughter of John Freston of Sibton Abbey, Yoxford, Suffolk, who had changed his name to Scrivener on an inheritance. Dorothea brought to the marriage a large income of £1700-a-year from the Scrivener estates in Suffolk. The couple had three children, Edward Fisher, who died unmarried, and two daughters, Dorothea, who married John Frederick Pike, who then assumed the additional name of Scrivener, and Elizabeth, who married John Mirehouse, JP, DL, of Brownslade, Pembrokeshire, Wales, and Common Serjeant of London (1833–1850).[4][5] 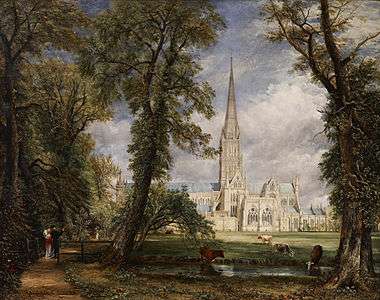 Salisbury Cathedral from the Bishop's Grounds, c. 1825, John Constable. Couple strolling along elm alley are Bishop of Salisbury John Fisher and his wife