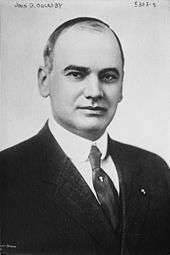 Born in Decatur, Illinois, on March 19, 1873, he was the son of Illinois Governor Richard James Oglesby and Emma Gillet Oglesby, a member of the prominent Oglesby political family of Kentucky and Illinois.[1] Oglesby served in the United States Army during the Spanish–American War and was a member of Illinois House of Representatives in 1905. He served as lieutenant governor for two non-consecutive terms, from 1909 to 1913 and from 1917 to 1921. (He ran for reelection after his first term in 1912 and was defeated).

Oglesby was a delegate to the Illinois convention to ratify the Twenty-first Amendment to the United States Constitution in 1933. He died near Elkhart in Logan County, Illinois, and is interred at Elkhart Cemetery.