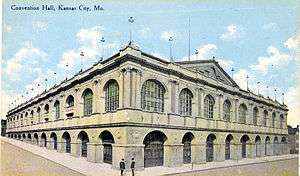 The 1928 National Convention of the Republican Party of the United States was held at Convention Hall in Kansas City, Missouri, from June 12 to June 15, 1928.[1]

Because President Coolidge had announced unexpectedly he would not run for re-election in 1928, Commerce Secretary Herbert Clark Hoover became the natural front-runner for the Republican nomination. Former Illinois Governor Frank Lowden and Kansas Senator Charles Curtis were candidates for the nomination but stood no chance against the popular and accomplished Hoover. Chicago Mayor William Hale Thompson considered himself a candidate, but without the support of Ruth Hanna McCormick, his candidacy was unsuccessful.[2]

Hoover was nominated on the first ballot with 837 votes to 72 for Lowden and 64 for Curtis and the rest scattered. John L. McNab delivered Hoover's nomination address. In his acceptance speech he said that "We in America today are nearer to the final triumph over poverty ever before in the history of any land"; this and other optimistic remarks about the country's future were held against him in the 1932 election, which he lost to Franklin D. Roosevelt.

The platform praised the Coolidge administration for the prosperity of the mid-1920s, and also promised reduction of the national debt, tax reduction, retention of the protective tariff, opposition of cancellation of foreign debts, settlement of claims from World War I from foreign governments, continuation of the Coolidge foreign policy, support of arbitration treaties, civil service protection, a tariff for agricultural protection and continued farm exports, aid to the coal-mining industry, continued appropriations for highway construction, the right to collective bargaining, regulation of railroads, a continued independent American merchant marine, government supervision of radio facilities, construction of waterways to help transportation of bulk goods, support for war veterans, federal regulation of public utilities, conservation, vigorous law enforcement, honest government, continued reclamation of arid lands in the West, improvement of air-mail service, restricted immigration and naturalization of foreign immigrants in America, continued enforcement of the Washington Naval Treaty, continued status of territory status for Alaska and Hawaii and called for more women in public service, right of the President to draft defense material resources and services, creation of an Indian Commission, an Anti-Lynching Law and promised continued Home-Rule for the American Citizen.

Candidates for the nomination before and during the convention

Hoover appeared to be the likely nominee at the start of the convention, but many in the party still opposed Hoover. A "draft Coolidge" movement emerged, but the movement collapsed as it became clear that Coolidge would not run for a third term.[3] With Coolidge out of the running, Senate Majority Leader Charles Curtis tried to rally Hoover's rivals around his own candidacy.[3] However, Hoover his opponents won the nomination on the first ballot.

Candidates for the vice presidential nomination

At the start of the convention, Vice President Charles G. Dawes, former Kansas Governor Henry Justin Allen, New Jersey Senator Walter Edge, New Hampshire Senator George H. Moses, Connecticut Congressman John Q. Tilson, and Ambassador Alanson B. Houghton were mentioned as potential running mates for Hoover.[3] Kansas Senator Charles Curtis was also mentioned as a possibility, but Curtis was not yet ready to concede the presidential nomination to Hoover.[3] After Hoover won the presidential nomination, Moses, Illinois Senator Charles S. Deneen, and Massachusetts Governor Channing Cox were named as the most likely vice presidential nominees, with a re-nomination for Dawes also a possibility.[4] Party leaders considered nominating Cox or Dawes, but the former was vetoed by Utah Senator Reed Smoot, and the latter's support of McNary-Haugen made him unacceptable to Hoover and Coolidge.[5] Curtis, possibly with the support of Coolidge, was nominated by the party leaders, and the convention ratified the choice.[5]

Each of the four days of the convention opened with a lengthy invocation by a different clergymen—one Jewish, one Catholic, one Episcopalian, one Methodist.[8] Together, these four religious groups formed a majority of Americans at the time.[9]

All of the clergy were based in Missouri, where the convention was held. Each was listed among the convention officers as an official chaplain.[10][11]