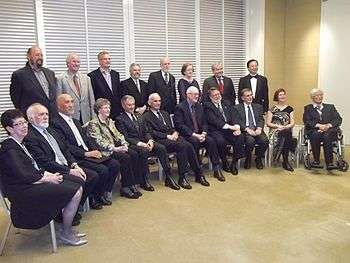 John C. Klensin is a political scientist and computer science professional who is active in Internet-related issues.[2][3]

His career includes 30 years as a Principal Research Scientist at MIT including a period as INFOODS Project Coordinator for the United Nations University, Distinguished Engineering Fellow at MCI WorldCom, and Internet Architecture Vice President at AT&T; he is now an independent consultant.[2][3]

John Klensin was involved in The Cambridge Project,[4] a social science data management cooperation project taking place at MIT, Harvard and other universities from 1969 to 1977. As a part of this program, John Klensin led the development of the Consistent System[5][6][7] targeted for use by Social Scientists. The Consistent System ran on top of the Multics operating system.

His involvement with Internet protocols began in 1969, when he worked on the File Transfer Protocol.[8]

In 1992, Randy Bush and John Klensin created the Network Startup Resource Center,[9] helping dozens of countries to establish connections with FidoNet, UseNet, and when possible Internet.

His i18n work also included an April Fools' Day RFC in collaboration with Harald Alvestrand (RFC 5242) and MIME in collaboration with Ned Freed (RFC 4289 among others). As of 2011, he is a member of the RFC Independent Submissions Editorial Board.[14] He is working on several Internet drafts.[15]