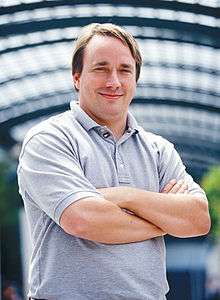 During an interview with Linux Magazine, 2002

Linus Benedict Torvalds (/ˈlaɪnəsˈtɔːrvɔːldz/;[5] Swedish: [ˈliːn.ɵs ˈtuːr.valds]; born December 28, 1969) is a Finnish software engineer[2][6] who is the creator and, for a long time, principal developer, of the Linux kernel; which became the kernel for operating systems such as the Linux operating system, Android and Chrome OS. He also created the distributed revision control system Git and the diving logging and planning software Subsurface. He was honored, along with Shinya Yamanaka, with the 2012 Millennium Technology Prize by the Technology Academy Finland "in recognition of his creation of a new open source operating system for computers leading to the widely used Linux kernel".[7] He is also the recipient of the 2014 IEEE Computer Society Computer Pioneer Award.[8]

Torvalds was born in Helsinki, Finland. He is the son of journalists Anna and Nils Torvalds,[9] and the grandson of statistician Leo Törnqvist and of poet Ole Torvalds. Both of his parents were campus radicals at the University of Helsinki in the 1960s. His family belongs to the Swedish-speaking minority. Torvalds was named after Linus Pauling, the Nobel Prize–winning American chemist, although in the book Rebel Code Linux and the Open Source Revolution, Torvalds is quoted as saying, "I think I was named equally for Linus the Peanuts cartoon character", noting that this makes him half "Nobel Prize–winning chemist" and half "blanket-carrying cartoon character".[10]

Torvalds attended the University of Helsinki between 1988 and 1996,[11] graduating with a master's degree in computer science from NODES research group.[12] His academic career was interrupted after his first year of study when he joined the Finnish Army Uusimaa brigade, in the summer of 1989, selecting the 11-month officer training program to fulfill the mandatory military service of Finland. In the army he held the rank of Second Lieutenant, with the role of a ballistic calculation officer.[13] Torvalds bought computer science professor Andrew Tanenbaum's book Operating Systems: Design and Implementation, in which Tanenbaum describes MINIX, an educational stripped-down version of Unix. In 1990, he resumed his university studies, and was exposed to UNIX for the first time, in the form of a DEC MicroVAX running ULTRIX.[14] His M.Sc. thesis was titled Linux: A Portable Operating System.[15]

His interest in computers began with a Commodore VIC-20,[16] at the age of 11 in 1981, initially programming in BASIC, but later by directly accessing the 6502 CPU in machine code. He did not make use of assembly language.[17] After the VIC-20 he purchased a Sinclair QL, which he modified extensively, especially its operating system. "Because it was so hard to get software for it in Finland, Linus wrote his own assembler and editor (in addition to Pac-Man graphics libraries)"[18] for the QL, as well as a few games.[19][20] He is known to have written a Pac-Man clone named Cool Man. On January 5, 1991[21] he purchased an Intel 80386-based clone of IBM PC[22] before receiving his MINIX copy, which in turn enabled him to begin work on Linux.

After a visit to Transmeta in late 1996,[4] Torvalds accepted a position at the company in California, where he would work from February 1997 until June 2003. He then moved to the Open Source Development Labs, which has since merged with the Free Standards Group to become the Linux Foundation, under whose auspices he continues to work. In June 2004, Torvalds and his family moved to Dunthorpe, Oregon,[1] to be closer to the OSDL's Beaverton, Oregon-based headquarters.

In 1999, Red Hat and VA Linux, both leading developers of Linux-based software, presented Torvalds with stock options in gratitude for his creation.[26] That same year both companies went public and Torvalds's share value temporarily shot up to roughly US$20 million.[27][28]

His personal mascot is a penguin nicknamed Tux,[29] which has been widely adopted by the Linux community as the mascot of the Linux kernel.[30]

Although Torvalds believes "open source is the only right way to do software", he also has said that he uses the "best tool for the job", even if that includes proprietary software.[31] He was criticized for his use and alleged advocacy of the proprietary BitKeeper software for version control in the Linux kernel. Torvalds subsequently wrote a free-software replacement for BitKeeper called git.

In 2008, Torvalds stated that he used the Fedora distribution of Linux because it had fairly good support for the PowerPC processor architecture, which he had favored at the time.[32] His usage of Fedora was confirmed in a later 2012 interview.[33] He has also posted updates about his choice of desktop environment, often in response to perceived feature regressions.

Currently, the Linux Foundation sponsors Torvalds so he can work full-time on improving Linux.[34]

Linus Torvalds is known for disagreeing with other developers on the Linux kernel mailing list.[35] Calling himself a "really unpleasant person", he later explained "I’d like to be a nice person and curse less and encourage people to grow rather than telling them they are idiots. I’m sorry – I tried, it’s just not in me."[36][37] His attitude, which Torvalds considers necessary for making his point clear, has drawn criticism from Intel programmer Sarah Sharp and systemd developer Lennart Poettering, among others.[38][39]

Initially, Torvalds wanted to call the kernel he developed Freax (a combination of "free", "freak", and the letter X to indicate that it is a Unix-like system), but his friend Ari Lemmke, who administered the FTP server where the kernel was first hosted for download, named Torvalds's directory linux.[40]

As of 2006, approximately two percent of the Linux kernel was written by Torvalds himself.[28] Because thousands have contributed to the Linux kernel, this percentage is one of the largest contributions to it. However, he stated in 2012 that his own personal contribution is now mostly merging code written by others, with little programming.[41] Torvalds retains the highest authority to decide which new code is incorporated into the standard Linux kernel.[42]

Torvalds holds the "Linux" trademark[43] and monitors the use of it,[44] chiefly through the Linux Mark Institute. 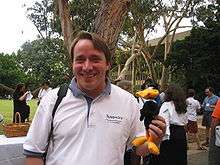 Linus Torvalds is married to Tove Torvalds (née Monni)—a six-time Finnish national karate champion—whom he first met in the autumn of 1993. Linus was running introductory computer laboratory exercises for students and instructed the course attendees to send him an e-mail as a test, to which Tove responded with an e-mail asking for a date.[10] Tove and Linus were later married and have three daughters, Patricia Miranda (born 1996), Daniela Yolanda (born 1998), and Celeste Amanda (born 2000),[45] two of whom were born in the United States.[6] The Linux kernel's reboot system call accepts their dates of birth (written in hexadecimal) as magic values.[46][47]

Torvalds describes himself as "completely a-religious—atheist", adding that "I find that people seem to think religion brings morals and appreciation of nature. I actually think it detracts from both. It gives people the excuse to say, 'Oh, nature was just created,' and so the act of creation is seen to be something miraculous. I appreciate the fact that, 'Wow, it's incredible that something like this could have happened in the first place.'" He later added that while in Europe religion is mostly a personal issue, in America it has become very politicized. When discussing the issue of church and state separation, Torvalds also said, "Yeah, it's kind of ironic that in many European countries, there is actually a kind of legal binding between the state and the state religion."[48]

In 2010, Torvalds became a United States citizen and registered to vote in the United States. He is unaffiliated with any U.S. political party, saying, "I have way too much personal pride to want to be associated with any of them, quite frankly."[6]

InfoWorld presented him with the 2000 Award for Industry Achievement.[65] In 2005, Torvalds appeared as one of "the best managers" in a survey by BusinessWeek.[66] In 2006, Business 2.0 magazine named him one of "10 people who don't matter" because the growth of Linux has shrunk Torvalds's individual impact.[67]

In summer 2004, viewers of YLE (the Finnish Broadcasting Company) placed Torvalds 16th in the network's 100 Greatest Finns. In 2010, as part of a series called The Britannica Guide to the World's Most Influential People, Torvalds was listed among The 100 Most Influential Inventors of All Time (ISBN 9781615300037).[68]