John Mercer Langston (December 14, 1829 – November 15, 1897) was an American abolitionist, attorney, educator, activist, diplomat, and politician. He was the first dean of the law school at Howard University and helped create the department. He was the first president of what is now Virginia State University, a historically black college.

Born a free black in Virginia to a freedwoman of mixed race and a white planter father, in 1888 Langston was elected to the U.S. Congress as the first representative of color from Virginia. Joseph Hayne Rainey, the black Republican congressman from South Carolina, had been elected in 1870 during the Reconstruction era.

In the Jim Crow era of the later nineteenth century, Langston was one of only five African Americans elected to Congress from the South before the former Confederate states passed constitutions and electoral rules from 1890 to 1908 that essentially disenfranchised most blacks and many poor whites, excluding the blacks from politics. After that, no African Americans would be elected from the South until 1973, after the federal Voting Rights Act of 1965 was passed to enforce their constitutional rights. In addition, the U.S. Supreme Court struck down the gerrymandered district lines that southern white Democratic State legislatures had drawn to dilute their power and prevent blacks from having enough of a presence in any district to be able to elect a representative of their choice. At the time, most blacks supported Republican Party candidates, both white and black.

Langston's early career was based in Ohio where, with his older brother Charles Henry Langston, he began his lifelong work for African-American freedom, education, equal rights and suffrage. In 1855 he was one of the first African Americans in the United States elected to public office when elected as a town clerk in Ohio.[1][2][3] John was a great-uncle of the renowned poet Langston Hughes.

John Mercer Langston was born free in 1829 in Louisa County, Virginia, the youngest of a daughter and three sons of Lucy Jane Langston, a freedwoman of mixed African and Native American descent, and Ralph Quarles, a white planter from England.[4] Quarles had freed Lucy and their daughter Maria in 1806, in the course of what was a relationship of more than 25 years. Their three sons were born free, as their mother was free.[2] John's older brothers were Gideon and Charles Henry.

Lucy had three children with another partner before she moved into the Great House and deepened her relationship with Quarles. Their three sons were born after her move. Of the older half-siblings, William Langston was most involved with Quarles' sons. He relocated with them to Chillicothe, Ohio (see below).[2]

Before his death, Ralph Quarles arranged for his Quaker friend William Gooch to be made guardian of his children. As requested by Quarles, after the parents both died in 1833 when John Langston was four, Gooch moved with the boys and their half-brother William Langston to Chillicothe, Ohio, in a free state.[5] Quarles had reserved funds for the boys' education. In 1835 the older brothers Gideon and Charles started at the preparatory school of Oberlin College, where they were the first African-American students to be admitted.[6] Gideon looked much like his father; at the age of 21 Gideon took Quarles as his surname and thereafter was known as Gideon Quarles.[2]

The youngest Langston followed his brothers, enrolling in the preparatory program at Oberlin College at the age of fourteen. John Langston earned a bachelor's degree in 1849 and a master's degree in theology in 1852 from Oberlin. Denied admission to law schools in New York and Ohio because of his race, Langston studied law (or "read the law", as was the common practice then) as an apprentice under attorney and Republican US congressman Philemon Bliss; he was admitted to the Ohio bar in 1854.[3][7] In ohio, Langston was closely associated with abolitionist lawyer Sherlock James Andrews.[8]

In 1854 Langston married Caroline Matilda Wall, who also graduated from Oberlin College.[9] From North Carolina, she was the emancipated daughter of an enslaved mother and Colonel Stephen Wall, a wealthy white planter. The planter freed his mixed-race daughters Sara and Caroline, and sent them to Ohio to be raised in an affluent Quaker household.[10] An intellectual partner of Langston, Caroline had five children with him, one of whom died in childhood.[1]

Together with his older brothers Gideon and Charles, John Langston became active in the abolitionist movement. He helped runaway slaves to escape to the North along the Ohio part of the Underground Railroad. In 1858 he and Charles partnered in leading the Ohio Anti-Slavery Society, with John acting as president and traveling to organize local units, and Charles managing as executive secretary in Cleveland.[1] 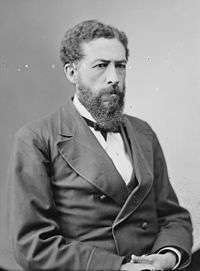 In 1863 when the government approved founding of the United States Colored Troops, John Langston was appointed to recruit African Americans to fight for the Union Army. He enlisted hundreds of men for duty in the Massachusetts Fifty-fourth and Fifty-fifth regiments, in addition to 800 for Ohio’s first black regiment. Even before the end of the war, Langston worked for issues of black suffrage and opportunity. He believed that black men's service in the war had earned their right to vote, and that it was fundamental to their creating an equal place in society.

After the war, Langston was appointed inspector general for the Freedmen's Bureau, a Federal organization that assisted freed slaves and tried to oversee labor contracts. The Bureau also ran a bank and helped establish schools for freedmen and their children.[3]

In 1864 Langston chaired the committee whose agenda was ratified by the black National Convention: they called for abolition of slavery, support of racial unity and self-help, and equality before the law.[1] To accomplish this program, the convention founded the National Equal Rights League and elected Langston president. He served until 1868. Like the later National Association for the Advancement of Colored People (NAACP), the League was based in state and local organizations. Langston traveled widely to build support. "By war's end, nine state auxiliaries had been established; some twenty months later, Langston could boast of state leagues nearly everywhere."[1]

In 1868 Langston moved to Washington, D.C. to establish and serve as dean of Howard University's law school; it was the first black law school in the country. Appointed acting president of the school in 1872, and vice president of the school, Langston worked to establish strong academic standards. He also engendered the kind of open environment he had known at Oberlin College. Langston was passed over for the permanent position of president of Howard University School of Law by a committee that refused to disclose the reason.[1]

During 1870, Langston assisted Republican Senator Charles Sumner from Massachusetts with drafting the civil rights bill that was enacted as the Civil Rights Act of 1875. The 43rd Congress of the United States passed the bill in February 1875 and it was signed into law by President Ulysses S. Grant on March 1, 1875.[11]

President Ulysses S. Grant appointed Langston a member of the Board of Health of the District of Columbia.[12]

In 1877 President Rutherford Hayes appointed Langston as U.S. Minister to Haiti;[12] he also served as chargé d'affaires to the Dominican Republic.[13]

After his diplomatic service, in 1885 Langston returned to the US and Virginia. He was appointed by the state legislature as the first president of Virginia Normal and Collegiate Institute, a historically black college (HBCU) at Petersburg. There he also began to build a political base.[1]

In 1888, Langston was urged to run for a seat in the U.S. House of Representatives by fellow Republicans, both black and white. Leaders of the biracial Readjuster Party, which had held political power in Virginia from 1879 to 1883, did not support his candidacy. Langston ran as a Republican and lost to his Democratic opponent. He contested the results of the election because of voter intimidation and fraud.[1]

After 18 months, the Congressional elections committee declared Langston the winner, and he took his seat in the US Congress. He served for the remaining six months of the term, but lost his bid for reelection as Democrats regained control of Virginia. Langston was the first black person elected to Congress from Virginia, and he was the last for another century.[1] In a period of increasing disenfranchisement of blacks in the South, he was one of five African Americans elected to Congress during the Jim Crow era of the last decade of the nineteenth century. Two were elected from South Carolina and two from North Carolina. After them, no African Americans would be elected to Congress from the South until 1972, after passage of federal civil rights legislation enforcing constitutional rights for all citizens.[14]

In 1890 Langston was named as a member of the board of trustees of St Paul Normal and Industrial School, a historically black college, when it was incorporated by the Virginia General Assembly. In this period, he also wrote his autobiography, which he published in 1894.

From 1891 until his death in 1897, he practiced law in Washington, DC. He died at his home, Hillside Cottage at 2225 Fourth Street NW in Washington, DC, on the morning of November 15 from malaria induced acute indigestion.[15][16] After spending time at Harmony Cemetery in Maryland, and despite talk of sending him to Nashville for burial, he was buried at Woodlawn Cemetery in Washington, DC.[17] 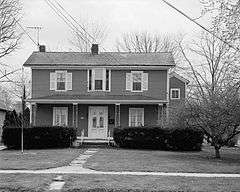 The John Mercer Langston House in Oberlin, Ohio, has been designated as a National Historic Landmark.

John Mercer Langston Elementary School at 33 P Street NW in Washington, DC was named in his honor. It opened in 1902 as a school for black students and remained open until 1993. In 1997 the building served as a homeless shelter, but it has mostly sat empty since closing.[18]