The Readjuster Party was a political biracial coalition formed in Virginia in the late 1870s during the turbulent period following the Reconstruction era. Readjusters aspired "to break the power of wealth and established privilege" among the planter elite of white men in the state and to promote public education. Their program attracted biracial support.

The party was led by Harrison H. Riddleberger of Woodstock, an attorney, and William Mahone, a former Confederate general who was president of several railroads. Mahone was a controlling force in Virginia politics from around 1870 until 1883, when the Readjusters lost control to white Democrats.[1] 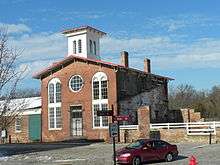 South Side Railroad Depot on Rock Street in Petersburg; it served as the office of William Mahone when his Readjuster Party dominated Virginia politics.

In the 1870s, the politics of Virginia was divided over the issue of the state's pre-war debt. The state had undertaken investment in infrastructure improvements overseen by the Virginia Board of Public Works, in canals, roads, and railroads. Prior to 1861, the State had purchased a total of $48,000,000 worth of stock in turnpike, toll bridge, canal, and water and rail transportation enterprises. Many of these improvements were heavily damaged or destroyed during the Civil War by Union forces.

Surviving improvements were facilities located in the portion of the state that had separated to become West Virginia, as it had not had as many battles on its territory. As much of the debt was held by Northern banks and investors, the issue of debt repayment was complex. Those who supported a readjustment of the debt, were known as "Readjusters", whereas those in favour of funding the entire debt (plus interest), became known as "Funders".

Mahone became the leader of the "Readjusters" after his unsuccessful bid for governor in 1877 as a Democratic candidate.[2] He formed a coalition of Democrats and Republicans, with both white and black supporters. He sought reduction in Virginia's pre-war debt, with an appropriate allocation to be borne by West Virginia. For several decades thereafter, the two states disputed West Virginia's share of the debt. The amount was finally settled in 1915 that West Virginia owed Virginia $12,393,929.50, based on negotiations over the interest amounts under a 1911 ruling by the United States Supreme Court that West Virginia was partially liable. The final installment of this sum was paid off in 1939.

The Readjuster Party promised to "readjust" the state debt, repeal the poll tax which had suppressed voting by blacks and poor whites, and increase funding for schools and other public facilities. Public education had been established for the first time under the Reconstruction-era legislature, but schools were underfunded, especially black schools. The Readjuster Party elected its candidate, William E. Cameron as governor, and he served from 1882-1886.

Mahone was elected by the state legislature as a U.S. Senator, serving from 1881 to 1887. In Congress, he primarily aligned on voting with the members of the Republican Party, as did fellow Readjuster Harrison H. Riddleberger, who served in the U.S. Senate from 1883-1889. After their terms, the Democratic legislature supported only Democratic candidates for the U.S. Senate.

The Readjusters' effective control of Virginia politics lasted until 1883, when they lost majority control of the state legislature. In 1885 the Democrat Fitzhugh Lee was elected governor. The collapse of the party was precipitated in part by its appointment of two freedmen to the Richmond school board. The collapse of the biracial Republican coalition was related to a broader struggle, over marriage and the legislature's attempt to ban miscegenation. Freedmen wanted to protect equality of rights in marriage, in part to gain protection for previous common-law marriages.[3]

Mahone stayed active in politics, but lost his bid for reelection as U.S. Senator, and as well as another bid for Governor as a Republican. Riddleberger died in 1890, Mahone in 1895. After the Readjuster Party disappeared, Virginia's Democratic Party dominated.

In the late nineteenth century, the legislature passed constitutional amendments and legislation that effectively disenfranchised all blacks and some poor whites. It created Jim Crow and legalized racial segregation of public facilities, including all transportation. Disenfranchisement meant that blacks could not serve on juries or run for any office; they lost any political voice. The Republican Party ceased to be competitive in the state. Most blacks were disenfranchised until after the mid-1960s, when the civil rights movement gained passage of federal legislation to enforce integration and voting rights.