Johnnie Walker is a brand of Scotch whisky owned by Diageo that originated in Kilmarnock, Ayrshire, Scotland. It is the most widely distributed brand of blended Scotch whisky in the world, sold in almost every country, with annual sales of over 130 million bottles.[1] 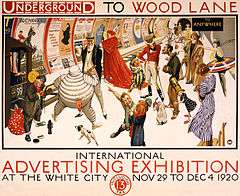 Originally known as Walker's Kilmarnock Whisky, the Johnnie Walker brand is a legacy left by John "Johnnie" Walker after he started to sell whisky in his grocer's shop in Ayrshire, Scotland. The brand became popular, but after Walker's death in 1857 it was his son Alexander Walker and grandson Alexander Walker II who were largely responsible for establishing the whisky as a popular brand. Under John Walker, whisky sales represented eight percent of the firm's income; by the time Alexander was ready to pass on the company to his own sons, that figure had increased to between 90 and 95 percent.[2]

In Britain prior to 1860, it was illegal to sell blended whisky.[3][4] During that time John Walker sold a number of whiskies—notably his own Walker's Kilmarnock. In 1865, John's son Alexander produced their first blend, Walker's Old Highland.

Alexander Walker introduced the iconic square bottle in 1860. This meant more bottles fitting the same space and resulted in fewer broken bottles. The other identifying characteristic of the Johnnie Walker bottle is the label, which is applied at an angle of 24 degrees and allows text to be made larger and more visible.[5]

From 1906 to 1909, John's grandsons George and Alexander II expanded the line and introduced the colour names. In 1908, when James Stevenson was the Managing Director, there was a re-branding of sorts. The whisky was renamed from Walker's Kilmarnock Whiskies to Johnnie Walker Whisky. In addition, the slogan "Born 1820—Still going Strong!" was created, along with the Striding Man logo, a figure used in their advertisements to this day, created by illustrator Tom Browne, in honour of the founder, and given the same name.

Johnnie Walker White was dropped during World War I.[6] In 1932, Alexander II added Johnnie Walker Swing to the line, the name originating from the unusual shape of the bottle, which allowed it to rock back and forth.

The company joined Distillers Company in 1925. Distillers was acquired by Guinness in 1986, and Guinness merged with Grand Metropolitan to form Diageo in 1997.

Johnnie Walker is no longer blended in Kilmarnock, and has not been for many years. The bonded warehouses and company offices (now local authority) can still be seen in Strand Street and John Finnie Street. On 1 July 2009, Bryan Donaghey, Diageo Managing Director for Global Supply Scotland, announced that Diageo intended to cease production at the plant in Kilmarnock. Under a restructuring programme across Scotland, production would be moved from the brand's original home to Diageo plants in Leven, Fife, and Shieldhall, Glasgow.

News of the planned closure had widespread media attention and condemnation. Following the decision, a public campaign was waged to try to persuade Diageo to reverse this decision. However, on 9 September 2009 Diageo stated that they intended to press ahead with the move away from Kilmarnock and that the matter was "closed".[7]

The Johnnie Walker plant, the largest employer in the town of Kilmarnock, closed its doors in March 2012.[8]

For most of its history Johnnie Walker only offered a few blends. In recent years there have been several special and limited bottlings. The strength of alcohol as also the volume of the bottle is rated uniquely in the USA vis a vis the rest of the world. A Johnnie Walker Red Label blended Scotch whisky sold in the U.S. will normally be in a 750-millilitre bottle at an ABV of 40%, 80 proof. In the USA, the proof value of any alcoholic drink is twice the percentage ABV. Elsewhere, the proof value is %ABV x 7/4. Thus a 40% ABV whisky, 80 proof in the USA, will be only 70 proof across the rest of the world. When Scotch whisky is produced for consumption within the EU, it has to conform to EU laws thereon; the bottle will contain only 700 ml of whisky, the strength of which will be 40% ABV, i.e. 70 proof. Whisky meant for Duty Free shops may exceed 700 ml. These are mostly 1.0-litre bottles at 75 proof, and the corresponding ABV is 42.8%, often rounded off to 43%. The latter criteria generally apply to Traveller Editions of that brand of whisky.

A variety of blends. 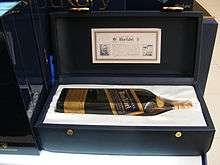 A key feature of every bottle of Johnnie Walker scotch is the Striding Man logo. It was created in 1908 by illustrator Tom Browne to be a likeness of John Walker in traditional, upscale attire. In the logo, the man is walking forward, which Diageo says symbolises forward thinking and the pursuit of excellence. Diageo has created a members club for Johnnie Walker drinkers, called "The Striding Man Society".[33]

Another key aspect of its marketing is the slanted label, which is angled at exactly 24 degrees. This was an advertising tool developed by Alexander Walker, who thought it would help his bottles stand out on the shelf. The slanted label also accommodates more text than would a traditionally oriented label.[34]

In 2009, the advertising agency Bartle Bogle Hegarty (BBH) created a new short film, starring Robert Carlyle and directed by Jamie Rafn, titled The Man Who Walked Around the World, which outlined the history of the Johnnie Walker brand.[5][35][36]

In 2013, ahead of the sixth season of Mad Men, the firm launched an ad campaign featuring Christina Hendricks.

Johnnie Walker also launched the international John Walker & Sons Voyager tour in order to market its higher variants in the Asia-Pacific, Europe and Caribbean markets. The Voyager tour was developed in order to promote the special edition Odyssey blend and pay tribute to the original trade routes and sea voyages by which Johnnie Walker was distributed throughout the world. The final leg of the tour was completed in 2014 visiting six Caribbean countries on board the Regina Yacht (featured in the major motion picture Skyfall).

Up until 2015 Johnnie walker black label bottles had a Kosher sign, naming the OK Kosher organization as one that provide Kosher tests for the product. IBBL and Paneco groups export Johnny Walker to Israel.[37]

Following an inquiry by the Israeli Rabbinical authority, Rabbi Aharon Hesskel from the OK organization conducted an investigation and published that only IBBLS marks are genuine while the Paneco group did not get their certification.[38] The Israeli Rabbinical authority released a statement that urged customers to verify the producer and stated that the Paneco group is suspected of certificate forgery. Paneco representatives stated that they do have a Kosher certificate (from the Israeli rabbinical authority) and asked the Israeli police to perform an investigation.[39] A representative told the International Business Times, "All products sold on Paneco.com are completely and solely original. The Johnnie Walker whisky products sold on the site are created by the primary manufacturer at the Diageo distillery in Scotland and is exactly the same product marketed by a competing company in Israel, which holds the kosher certification for the product."[37]

Johnnie Walker spirits have received strong scores at international spirit ratings competitions and from liquor review bodies. The Green Label received a string of three double gold medals from the San Francisco World Spirits Competition between 2005 and 2007.[40] The Gold Label received double gold medals from the San Francisco competition in 2008 and 2009 and won a gold in 2010.[41] Spirits ratings aggregator proof66.com, which averages scores from the San Francisco Spirits Competition, Wine Enthusiast, and others, puts the Black, Blue, Gold and Green Labels in its highest performance category ("Tier 1" Spirits).[42] Johnnie Walker spirits have several times taken part in the Monde Selection’s World Quality Selections and have received a Gold and Grand Gold Quality Award.[43] Johnnie Walker was voted India's Most Trusted Premium Whisky Brand according to the Brand Trust Report 2014, a study conducted by Trust Research Advisory.[44]