The Orangerie at Épernay

In 1833 the company was renamed Moet et Chandon after Pierre-Gabriel Chandon, the director of maisson4, joined the company as a partner of Jean-Remy Moet, Claude Moet's grandson.

Following the introduction of the concept of a vintage champagne in 1840, Moët marketed its first vintage in 1842. Their best-selling brand, Brut Imperial was introduced in the 1860s. Their best known label, Dom Perignon, is named for the Benedictine monk remembered in legend as the "Father of Champagne". Moët & Chandon merged with Hennessy Cognac in 1971 and with Louis Vuitton in 1987 to become LVMH (Louis-Vuitton-Moët-Hennessy), the largest luxury group in the world, netting over 16 billion euros in fiscal 2004. Moët & Chandon holds a royal warrant as supplier of champagne to Queen Elizabeth II.[5][4]

In 2006, Moët et Chandon Brut Impérial issued an extremely limited bottling of its champagne named "Be Fabulous", a special release of its original bottle with decorative Swarovski crystals, marking the elegance of Moët et Chandon. 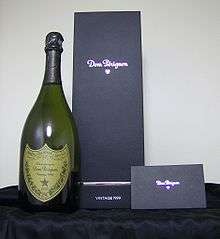 A bottle of vintage 1999 Dom Pérignon with accompanying materials 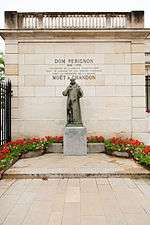 Dom Pérignon (/ˌdɒmpɛrɪˈnjɒn/; French pronunciation: ​[dɔ̃peʁiɲɔ̃]) is a brand of Champagne produced by Moët et Chandon. It is named after Dom Pérignon, a Benedictine monk who was an important quality pioneer for Champagne wine but who, contrary to popular myths, did not discover the champagne method for making sparkling wines.[7] Dom Pérignon was the first prestige cuvée, an idea proposed by Englishman Laurence Venn.[8] The first vintage of Dom Pérignon was 1921 and was only released for sale in 1936. Dom Pérignon is a vintage champagne, meaning that it is only made in the best years, and all grapes used to make the wine were harvested in the same year. Many champagnes, by contrast, are non-vintage, which means that the champagne is made from grapes harvested in various years.

Bottles in the caves

In 1973, the then Moët-Hennessy company founded Domaine Chandon, an outpost winery in the Napa Valley. It was the first French-owned sparkling wine venture in the United States. The fine dining restaurant etoile is situated at the winery.[9]

Domaine Chandon in Australia was established in 1986 at Coldstream, Victoria.

On 30 November 2012, Roger Federer became Moët et Chandon's brand ambassador. On 30 September 2015, Chandon announced it would be a sponsor of the McLaren-Honda F1 Team starting 2016.[10]

Pronunciation and origin of the name: Moët

The correct pronunciation is "mo-ette" or "mo-wett" (IPA: [moɛt]) the "t" is not silent. Legend has it that the family name originated in 1429 when a Dutch soldier named LeClerc warded off a group of English combatants who were trying to suppress the coronation of Charles VII in Reims. LeClerc headed a crowd of Remois that ran at the English screaming 'Het moёt zoo zijn' (it must be so). The English retreated after that. LeClerc became known as M. Moët after the incident. [11]

Moët & Chandon is mentioned in the songs "Drop It Like It's Hot" by Snoop Dogg; "Killer Queen" by Queen; "N.Y. State of Mind", "It Ain't Hard to Tell", and "Represent" by Nas; "Put It On" by Big L; and "Juicy", "Big Poppa", and "Everyday Struggle" by The Notorious B.I.G.; and "7 Days" by Craig David. Dom Perignon is mentioned in the song "Big Shot" by Billy Joel, Richard Strauss's opera, Arabella, "The World is Yours" by Nas, and "Diamonds Dancing" by Drake and Future.