John "Johnny" Patrick Kilbane (April 9, 1889 – May 31, 1957) was a featherweight boxer in the early part of the 20th century. He held the World Featherweight title from 1912 to 1923, the longest period in the division's history.[1] He is the second longest world title holder in boxing history behind Joe Louis. Statistical boxing website BoxRec lists Kilbane as the #2 ranked featherweight of all-time, while The Ring Magazine founder Nat Fleischer placed him at #5.[2][3] The International Boxing Research Organization rates Kilbane as the 8th best featherweight ever.[4] He was inducted into the Ring Magazine Hall of Fame in 1960 and the International Boxing Hall of Fame in 1995.[2]

Kilbane was born to John and Mary (Gallagher) Kilbane in Cleveland, Ohio on April 9, 1889. His mother died when he was 3 years old and his father went blind when he was 6. He attended school until the sixth grade when he dropped out to help support his family.

Kilbane's first professional fight was in 1907, for which he earned $25.

On February 22, 1912 Kilbane took the featherweight title from Abe Atell in a twenty round match in Vernon, California. When he returned to Cleveland, on St. Patrick's Day, he was given the greatest welcome ever given to a native Clevelander, with more than 100,000 people turning out. He held the featherweight championship for 11 years through numerous fights. He finally lost it to Eugene Criqui. The high number of "no decision"s in his career reflected early boxing rules in many states in the U.S. that dictated "no decision"—ND—unless a fight ended by knockout.

Kilbane fought 1904 World Bantamweight champion Jimmy Walsh in a World Featherweight Title match on May 21, 1912 at the Pilgrim Athletic Club in Boston, Massachusetts to a twelve round draw decision.[5] They had previously fought in a non-title match on May 30, 1911, in a 12 round draw bout in Canton, Ohio, that was characterized as "full of clinches", with neither man "doing much hard work."[6]

Kilbane would then go onto referee boxing matches after retiring from boxing, as well as operating a gym, serving in the Ohio Senate and as Clerk of the Cleveland Municipal Court.

Kilbane was such a popular prizefighter in his day that his name appeared in print as a verb. An unsigned commentary in the sports pages of the New York Times on May 16, 1912, reported on an episode involving Detroit baseball player Ty Cobb, who the day before, in a game between the Detroit Tigers and the New York Yankees, had gone into the stands after a heckler. The commentary said, "The famous baseball player from Detroit, Ty Cobb chased after a heckler during a game with the New York Yankees and 'Johnny Kilbaned' him right where he stood...and in so doing stopped the profane and intolerable language dead in its tracks, along with the heckler himself". Kilbane was a distant relative of the Irish boxer John Joe Nevin, the footballer Darren Fletcher, the wrestler Giant Haystacks and the Irish footballer Kevin Kilbane. His family was originally from Achill, County Mayo, Ireland. 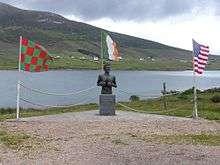