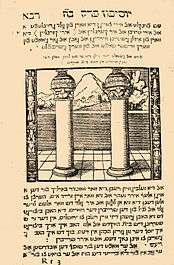 Josippon is a chronicle of Jewish history from Adam to the age of Titus believed to have been written by Josippon or Joseph ben Gorion. The Ethiopic version of Josippon is recognized as canonical by the Ethiopian Orthodox Church.[1]

The Sefer Josippon was compiled in Hebrew early in the 10th century by a Jewish native of the Greek speaking Jewish community of South Italy, which was at that time part of the Byzantine Empire.[2] Later Judah Leon ben Moses Mosconi, a Romaniote Jew from Achrida edited and expanded the Sefer Josippon.[3][4] The first edition was printed in Mantua in 1476. The book subsequently appeared in many forms, one of the most popular being in Yiddish, with quaint illustrations. Though the chronicle is more legendary than historical, it is not unlikely that ancient sources were used by the first compiler. The book enjoyed great popularity in England. In 1558, Peter Morvyn translated an abbreviated version into English, and edition after edition was called for. Lucien Wolf has shown that the English translations of the Bible aroused so much interest in the Jews that there was a widespread desire to know more about them. This led to the circulation of many editions of Josippon, which thus formed a link in the chain of events which culminated in the readmission of the Jews to England by Oliver Cromwell. The work is ascribed to Joseph ben Gorion (יוסף בן גוריון), a Jew living in southern Italy in either the 9th or the 10th century. As the Muslim writer ibn Hazm (d. 1063) was acquainted with the Arabic translation by a Yemenite Jew, Daniel Chwolson proposes that the author lived at the beginning of the 9th century.

The author professes to be the old Jewish-Roman historian Flavius Josephus, giving to the name "Joseph" the Greek ending "on" ("Josephon," "Joseppon," or "Josippon". His Arabic name "Yusibus" is, according to Wellhausen, identical with "Hegesippus"). A gloss gives the form from the Italian, "Giuseppe." Trieber held the singular view that the author lived in the 4th century, and derived much of his material from Hegesippus.

Commencing with Adam and the geographical conditions of the first millennium BCE, the author passes to the legendary history of Rome and Babylon, to the accounts of Daniel, Zerubbabel (according to the Apocrypha), the Second Temple, and Cyrus the Great, and to the histories of Alexander the Great and his successors. He then gives the history of the Jews down to the destruction of the Temple. The last part contains, among other things, a brief history of Hannibal and an account of the coronation of an emperor, which, according to Basnage[5] refers to that of Otto the Great (crowned 962); this would be the only and a most valuable source of information concerning this event. If Basnage's conjecture is correct, the date of the composition of the "Yosippon" may be placed at the end of the 10th century. "Yosippon" is written in comparatively pure Biblical Hebrew, shows a predilection for certain Biblical phrases and archaisms, and is rich in poetical passages and in maxims and philosophical speculations.

Value as a historical source

"Yosippon" was much read and was highly respected as a historical source by the Jews of the Middle Ages. Joseph Justus Scaliger in his "Elenchus Trihæresii Nicolai Serarii" was the first to doubt its worth; Jan Drusius (d. 1609) held it to be historically valueless on account of its many chronological mistakes; Zunz and Delitzsch have branded the author as an impostor. In fact, both the manuscripts and printed editions are full of historical errors, misconceptions of its sources, and extravagant outbursts of vanity on the part of the author. But there is scarcely any book in Jewish literature that has undergone more changes at the hands of copyists and compilers; Judah ibn Moskoni knew of no less than four different compilations or abridgments. The later printed editions are one-third larger than the editio princeps of Mantua.

Evolution of the title

It was perhaps due to Jerahmeel ben Solomon that the work received its traditional title "Yosippon." He supplemented his copy from Josephus, whom he designates as "the great Joseph." The original title of the work, according to Trieber, was probably "History of Jerusalem",[6] or, as a manuscript suggests, "History and Wars of the Jews." It is quoted in the Hebrew-Persian dictionary of Solomon ben Samuel (14th century), under the title "History of the Second Temple."

Sebastian Münster's edition[7] omits as not genuine the legendary introduction[8] with its genealogical list,[9] and also ch. lxvii. to the end, narrating the expedition of Vespasian and Titus against Jerusalem. Azariah dei Rossi also recognized that the Alexander Romance of Pseudo-Callisthenes in a Hebrew translation had been smuggled into the first edition; and, following David Kimchi, Rapoport showed that the last chapter belonged to Abraham ibn Daud.[10] Zunz has shown many other portions of the work to be Spanish additions, made in the 12th century. Almost the whole account of Alexander the Great and his successors has been proved by Trieber to be of later origin. According to that critic, the part of the work original with its author ended with ch. lv. (the dedication of Herod's Temple), more or less of the remainder being taken from Pseudo-Hegesippus, and perhaps added as early as the 5th century. This would explain the numerous contradictions and style-differences between these two parts.

There remains, as the nucleus of the whole chronicle, a history of the Second Temple, beginning with the apocryphal stories concerning Daniel, Zerubbabel, etc., and finishing with the restoration of the Temple under Herod. A copyist of Pseudo-Hegesippus, however, identified the "Joseph ben Gorion" (Josephum Gorione Genitum), a prefect of Jerusalem, mentioned in iii. 3, 2 et seq., with the historian Josephus ben Mattithiah, at this time governor of the troops in Galilee. This may account for the fact that the chronicle was ascribed to Joseph b. Gorion.

Julius Wellhausen, agreeing with Trieber, denies that the genuine part has any historical value whatever. Trieber contends that the author did not draw his information directly from Josephus or from the Second Book of Maccabees, as is usually believed, and as Wellhausen maintains. He believes that both II Maccabees and the "Yosippon" used the work of Jason of Cyrene, and Josephus and the "Yosippon" that of Nicholas of Damascus. A study of the "Yosippon" would reveal the manner in which Josephus and II Maccabees used their sources. Apart from the Chronicle of Panodorus, which was largely used by the interpolators, the work in its original, as well as in its later form, seems to have been influenced by other sources, hitherto unascertained. Further light may in the future be thrown upon the subject by a more extended criticism of the text.

An English translation of this abstract was made by Peter Morvyn (London, 1558, 1561, 1575, 1608). A Yiddish compendium by Edel bat Moses was published in Kraków in 1670; the oldest German extract, under the title "Joseppi Jüdische Historien" (author not known) is described in Wolf, "Bibl. Hebr." (iii. 389). Some short extracts, in German, are given in Joseph Zedner, Auswahl aus Hebräischen Schriftstellern (pp. 16 et seq.), and in Winter and Wünsche, Die Jüdische Litteratur. iii. 310 et seq.).

In the Arabic and Yemenite translations, the author is called "Yusuf ibn Qaryun."