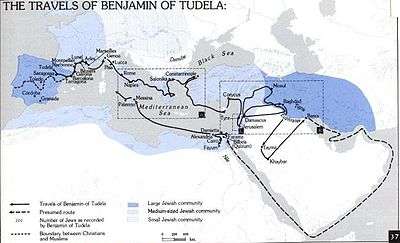 Benjamin of Tudela (Hebrew: בִּנְיָמִין מִטּוּדֶלָה‎, pronounced [binjaˈmin mituˈdela]; Arabic: بنيامين التطيلي‎‎;‎ Tudela, Kingdom of Navarre, 1130 – Castile, 1173) was a medieval Jewish traveler who visited Europe, Asia, and Africa in the 12th century. His vivid descriptions of western Asia preceded those of Marco Polo by a hundred years. With his broad education and vast knowledge of languages, Benjamin of Tudela is a major figure in medieval geography and Jewish history.

Little is known of his early life, apart from the fact that he was from the Navarrese town of Tudela in what is now Spain. Today, a street in the aljama (former Jewish quarter) is named after him.

The Travels of Benjamin is an important work not only as a description of the Jewish communities, but also as a reliable source about the geography and ethnography of the Middle Ages. Some modern historians credit Benjamin with giving accurate descriptions of everyday life in the Middle Ages. Originally written in Hebrew, his itinerary was translated into Latin and later translated into most major European languages. It received much attention from Renaissance scholars in the 16th century. 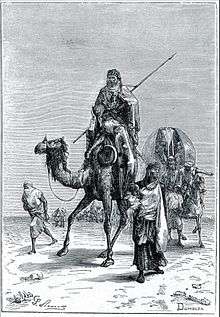 Benjamin of Tudela in the Sahara (Author : Dumouza, 19th-century engraving)

Benjamin set out on his journey from the northeast Iberian Peninsula around 1165, in what may have begun as a pilgrimage to the Holy Land.[1] It has been suggested he may have had a commercial motive as well as a religious one. On the other hand, he may have intended to catalog the Jewish communities en route to the Land of Israel to provide a guide where hospitality could be found for Jews traveling to the Holy Land, or for those fleeing oppression elsewhere.[2] He took the "long road," stopping frequently, meeting people, visiting places, describing occupations and giving a demographic count of Jews in each town and country that he visited.

His journey began in the city of Zaragoza, further down the valley of the Ebro to Tarragona, Barcelona, and Girona, whence he proceeded north to France, and then set sail from the port of Marseilles. After visiting Genoa, Lucca, Pisa, and Rome in present-day Italy — he next went to Greece and Constantinople, and then set off across Asia. He visited Syria, Lebanon, the Land of Israel, and northern Mesopotamia (which he called Shinar) before reaching Baghdad. From there he went to Persia, then cut back across the Arabian Peninsula to Egypt and North Africa, returning to the Iberian Peninsula in 1173.[1] His visit to the ruins outside the city of Mosul in Iraq is one of the earliest accurate descriptions of the site of ancient Nineveh.[3] He visited in all, over 300 cities, including many of importance in Jewish history, such as Susa, Sura, and Pumbedita in Iraq. In addition, he gathered information on many more areas which he heard about on his travels, including China and Tibet. He recorded details on cultures such as that of Al-Hashishin, the hemp smokers, introducing Western Europeans to people and places far beyond their experience.

He described his years abroad in a book, The Travels of Benjamin (מסעות בנימין, Masa'ot Binyamin, also known as ספר המסעות, Sefer ha-Masa'ot, The Book of Travels). This book describes the countries he visited, with an emphasis on the Jewish communities, including their total populations and the names of notable community leaders. He also described the customs of the local population, both Jewish and non-Jewish, with an emphasis on urban life. He gave detailed descriptions of sites and landmarks passed along the way, as well as important buildings and marketplaces. Although Benjamin is noted for citing sources and is generally regarded by historians as trustworthy, some of his claims are faulted as relying on earlier writers. For instance, Benjamin's identification of the Laish (Tel Dan) with Baniyas along with Philostorgius, Theodoret, and Samuel ben Samson is incorrect.[4] Eusebius of Caesarea, conversely, locates Dan/Laish more accurately in the vicinity of Paneas at the fourth mile on the route to Tyre.[5]

Translations of his work

The name Benjamin of Tudela was adopted by a mid-19th-century traveler and author, known as Benjamin II.

One of the main works of Mendele Mocher Sforim, a major 19th-century Russian Jewish writer, is the 1878 Masoes Benyomen Hashlishi (מסעות בנימין השלישי) (The Wanderings of Benjamin III), which is considered something of a Jewish Don Quixote and whose title is clearly inspired by Benjamin of Tudela's book.

A street in Jerusalem's Rehavia neighborhood, Rehov Binyamin Mitudela (רחוב בנימין מטודלה), is named after him—as is a street in the former Jewish Quarter of his hometown Tudela.

The well-known Israeli poet Nathan Alterman wrote a poem about Benjamin of Tudela, which was set to music by Naomi Shemer and was often heard on the Israeli radio.[6]