KYW (1060 AM), "Newsradio 10-60", is a commercial AM radio station, licensed to Philadelphia, Pennsylvania. The station is owned by the CBS Radio subsidiary of CBS Corporation and broadcasts an all-news format. Its studios are located in Center City Philadelphia and its transmitter and two-tower directional antenna array are located in Lafayette Hill.

KYW is one of the oldest radio stations in the United States, and also has had one of the more complicated histories. Located in Chicago, Illinois at its start in late 1921, it moved to Philadelphia in 1934. In 1956 the KYW call letters were transferred to a station in Cleveland, Ohio, only to be returned nine years later to their original Philadelphia home.

An assortment of local, national and global headlines are read at the top and bottom of each hour, with news summaries at the quarter hours immediately before a sports report. Besides the main news stories, KYW carries a variety of other features, and receives news reports and sound-bites, along with continuous coverage of breaking news, from ABC News Radio, NBC News Radio and CBS News.

An unusual characteristic of KYW is the playing of a recording of Teletype printers clattering in the background while KYW reporters announce at the studio. This is intended to allow listeners to immediately identify the station to which they are listening.[3] However, the sound is not played during other times, such as commercials and taped news segments, including AccuWeather forecasts.

The Teletype sound, along with the slogans "All news, all the time", "The newswatch never stops", "Listen two, three, four times a day" and "You give us 22 minutes, we'll give you the world", originated at WINS in New York City. KFWB Los Angeles and WMAQ Chicago also used this branding until they changed formats.[4]

In November 1920, the Westinghouse Electric & Manufacturing Company established its first broadcasting station, KDKA, located in its plant at East Pittsburgh, Pennsylvania, in order to promote the sale of radio receivers. This initial station proved successful, so in 1921 the company developed plans to set up additional stations in major population centers, including, in addition to KYW, WJZ in Newark, New Jersey (now WABC in New York City), and WBZ, originally in Springfield, Massachusetts, and now in Boston. 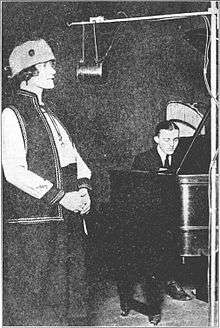 The station was first licensed on November 15, 1921 as Chicago's first broadcasting station, with the randomly assigned call letters of KYW.[6] It was initially jointly operated by Westinghouse and Commonwealth Edison, with Westinghouse later taking over as sole operator. Through the financial support of Samuel Insull, and the cooperation of Mary Garden, director general of the Chicago Opera Company, KYW's initial broadcasts consisted of the opera company's entire six-day-a-week winter season schedule. Ten microphones were installed across the Chicago Civic Auditorium stage, with equipment for switching between them as needed. After the close of the opera season, KYW installed a studio in the Commonwealth Edison building, and began producing additional programming.[7] By fall of 1922 the station was operating for twelve hours a day.[8]

In 1927, Westinghouse affiliated its four radio stations (KYW, KDKA in Pittsburgh, WBZ in Springfield, Massachusetts and WBZA in Boston) with the National Broadcasting Company's (NBC) NBC-Blue Network, which originated from station WJZ in New York City, which had been transferred from Westinghouse to the Radio Corporation of America (RCA) in 1923. Westinghouse had been a founding partner of RCA, NBC's original parent company.

In 1923, Westinghouse established a station, KFKX in Hastings, Nebraska, located near the center of the country. The station was designed to serve a dual purpose, of providing an agricultural service, and for testing the practicality of using shortwave transmitters to link together radio networks, with KFKX receiving much of its programming by shortwave from KDKA in Pittsburgh. In 1928 the project was abandoned, although it was announced that the KFKX programming was being consolidated with KYW, which resulted in the creation of the dual call letter assignment of KYW-KFKX. KFKX would be quietly dropped from the call sign in 1933.[9]

Under the provisions of the Federal Radio Commission's (FRC) General Order 40, a sweeping reallocation of station frequency assignments was implemented on November 11, 1928. KYW was assigned to the clear channel frequency of 1020 kHz, but the assignment caused two major problems. KYW's signal on the new frequency experienced difficulties in covering the entire city of Chicago, and a relay transmitter, KYWA, was set up in late 1928, although it would be deleted as no longer needed by the spring of 1930. A second issue was that, under the provisions of the "Davis Amendment", eight clear channel frequencies were to be allocated to each of five national regions. Chicago was located in Region 4, while the reallocation provisions had reserved 1020 kHz for use in Region 2, a grouping of mid-Atlantic states. Westinghouse fought a long legal battle attempting to keep KYW operating on 1020 in Chicago, but finally agreed to move the station to a Region 2 location, settling on Philadelphia.[9]

After broadcasting its last program in Chicago on December 2, 1934, KYW gave its debut Philadelphia program the next day,[10] utilizing the studios and sales operations of WCAU. The move made KYW the easternmost U.S. radio station with a call sign beginning with "K".[11] KYW became the city's NBC-Blue Network affiliate – an affiliation that lasted 20 years[12] – supplanting WFI and WLIT (which merged as WFIL in 1935). In 1938 KYW's studios were located at 1619 Walnut Street in Center City.

On March 29, 1941, KYW's clear channel assignment was shifted from 1020 to 1060 kHz, its current frequency, as part of a nationwide adjustment of assignments engineered by the North American Regional Broadcasting Agreement. In 1942, the Federal Communications Commission (FCC) compelled RCA to divest itself of one of its two radio networks. Prior to the divestiture of the NBC-Blue network (which became the American Broadcasting Company), KYW, along with the other Westinghouse radio stations, became affiliated with the NBC-Red Network, predecessor of modern-day NBC.

In June 1955, Westinghouse agreed to trade KYW and WPTZ to NBC, in exchange for the NBC's WTAM-AM-FM and WNBK television properties in Cleveland, Ohio. Westinghouse also received $3 million in cash compensation.[14] The main impetus for the trade was NBC's desire to acquire an owned-and-operated TV station in the fourth-largest American television market. NBC had to receive a waiver for the swap because KYW and NBC Radio's New York City flagship, WRCA (now WFAN) were both clear channel stations; at the time, the FCC normally did not allow common ownership of clear-channel stations with overlapping nighttime coverage. After clearing the final regulatory hurdles, the swap went into effect on January 22, 1956.[15]

On February 13, NBC renamed KYW in Philadelphia to WRCV (for the RCA-Victor record label), while Westinghouse changed the call letters of its new Cleveland station from WTAM to KYW.[16] The Westinghouse-NBC station swap, and its subsequent reversal nine years later, resulted in two alternate ways to recount KYW's history. In the records of the FCC, the station in Philadelphia on 1060 kHz merely underwent two call letter and ownership changes, taking place in 1956 and 1965. However most KYW histories follow the path of the call letters, and refer to KYW moving from Philadelphia to Cleveland in 1956, then returning to Philadelphia nine years later.[17]

Based on its responsibilities as an NBC-owned outlet, WRCV carried all of NBC's network programming, such as the weekend Monitor. Philadelphia radio legend Hy Lit briefly worked at WRCV during its first year, hosting a local rock-and-roll program and an adult standards show for the NBC network. Over time, WRCV was evolving into an adult-oriented middle-of-the-road (MOR) station.

Almost immediately after the NBC-Westinghouse trade was finalized, Westinghouse complained to the FCC and the United States Department of Justice that it had been coerced into making the station swap, including a threat by NBC to revoke Westinghouse's NBC-TV affiliations, and a lengthy investigation was launched.[18][19] In September 1959 the Justice Department issued a decision which, in part, instructed NBC to divest WRCV-AM-TV by the end of 1962.[20] Several months later in early 1960, NBC announced it would trade the WRCV stations to RKO General in exchange for that company's Boston outlets, WNAC-AM-FM-TV.[21] That proposed station swap would be held up for nearly four years until the FCC issued a final decision in August 1964, when the Commission renewed NBC's licenses for WRCV radio and television, on the condition that the 1956 station swap with Westinghouse be reversed.[22] RKO General initially contested the FCC's decision, but soon gave up its efforts and bowed out of the competition.[23] Following nearly a year of appeals by NBC, Westinghouse regained control of WRCV-AM-TV on June 19, 1965 and subsequently restored the KYW call letters to the radio station (the television station became KYW-TV at this point).[24]

Adoption of an all-news format

On September 21, 1965, shortly after Westinghouse regained control of 1060 AM, the newly revived KYW dropped its NBC radio affiliation and became one of the first stations in the country to adopt an all-news format.[25] Newsman Steve Porter read the first newscast, which had been edited by Fred B. Walters, the former Harrisburg bureau chief and eventual Executive Editor. The new format was part of an ongoing process at Westinghouse Broadcasting. Five months earlier the company had converted WINS, KYW's New York sister station since 1962, from a Top-40 format to all-news.[26] A third conversion was made three years later at another Westinghouse-owned station, KFWB in Los Angeles.[27] The Westinghouse trio of all-news stations made numerous contributions to developing the all-news format. 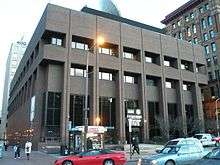 The former KYW Building on Independence Mall East, used by the station from 1972 to 2007. This building has since been demolished and replaced by the National Museum of American Jewish History.

In 1972 KYW moved to new studios in Independence Mall East, at Fifth and Market streets, where they would remain the next 35 years.

KYW has long been a major factor in the Philadelphia radio market, although an overall decline in AM listening has somewhat reduced its audience. KYW-TV took advantage of the radio station's popularity by incorporating a version of KYW's musical sounder into its news themes from 1991 to 2003. In addition, a television program entitled KYW Newsradio 1060 This Morning aired from 5 to 8 a.m. on sister station WPSG (channel 57) in the early 2000s, adapting KYW's "clock" to television. The show was popular among local cable programming in its daypart, and in late 2004 was usurped (due in part to a new affiliation to Traffic Pulse) by television staffers and assumed the name Wake UPNews.

In 1995 Westinghouse Electric announced its purchase of CBS, and upon its completion KYW became a sister station to its long-time rival, CBS-owned WGMP (1210 AM, now WPHT). That station, under its original WCAU call letters, had attempted during the late 1970s to compete with KYW with all-news programming, but failed, eliminating the format after a three year effort.

From 1986 to 1998, KYW used the C-QUAM AM Stereo system, but abandoned the system about the time of the CBS-Westinghouse merger and went back to standard monophonic AM.[28] The station has been using the HD Radio digital system created by iBiquity since September 2007 after an initial testing period.

In March 2007 the studios moved one half-block to 400 Market Street in Center City Philadelphia. In March 2014 they were relocated to 1555 Hamilton Street in Philadelphia, joining KYW-TV on the 6th floor. This is referred to on-air as the "CBS Broadcast Center".