Ryan John Seacrest (born December 24, 1974) is an American radio personality, television host, and producer. He is best known for hosting the talent competition show American Idol, as well as the syndicated countdown program American Top 40 and the KIIS-FM morning radio show On Air with Ryan Seacrest.[1][2][3]

Seacrest was born on December 24, 1974, in Atlanta, Georgia,[5] the son of Constance Marie (née Zullinger), a homemaker, and Gary Lee Seacrest, a real estate lawyer.[6][7] His mother told the Atlanta Journal-Constitution, "Instead of playing with G.I. Joes or Cowboys and Indians, [Ryan] would always have a little microphone and do shows in the house."[8]

At age 14, he attended Dunwoody High School. At age 16, while still attending high school, Seacrest won an internship at WSTR (FM), in Atlanta, with Tom Sullivan, who trained him in the many aspects of radio. When the regular DJ called in sick, Sullivan put him on the air for the very first show of his broadcasting career.[9] Seacrest was given the weekend overnight shift at WSTR.[8]

Seacrest continued to work on air at WSTR until graduating from Dunwoody High School in 1992.[10] Seacrest went on to study journalism at the University of Georgia in fall 1992. He continued his radio show at a local Athens station. Seacrest left the university at age 19 and moved to Hollywood to pursue his broadcasting career.[8] 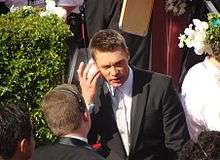 Seacrest at 2008 Primetime Emmys at Nokia Plaza in Los Angeles

In 1993, Seacrest hosted the first season of ESPN's Radical Outdoor Challenge. He also hosted three kids' game shows, Gladiators 2000 from 1994–96 (a spinoff of the television show, American Gladiators), Wild Animal Games in 1995, and Click in 1997. Seacrest appeared as the host of the fictional game show Lover's Lane on Beverly Hills, 90210 in "The Final Proof".[11] In the fall and winter of 2000, Seacrest was the host of The NBC Saturday Night Movie.[12] During commercial breaks, he offered trivia on the film and a chance to win prizes by answering online on NBCi. In 2001, he hosted a reality television program, Ultimate Revenge,[6] where elaborate practical jokes were played on family and friends instigated by their own relatives and friends. It was shown on TNN from 2001 to 2003.[11][13]

In 2002, Seacrest accepted the position as co-host of a new Fox reality television series American Idol with comedian Brian Dunkleman. American Idol went on to success, putting Seacrest in the national spotlight. The following year, he became the sole host. When the show increased in popularity, seen by some 26 million viewers weekly, Seacrest became recognizable around the world. In 2003, Seacrest hosted the spin-off show, American Juniors.[14] In July 2009, Seacrest inked a deal with CKX for $45 million to continue to host American Idol, making him the highest paid reality television host to date.[15] In April 2012, Seacrest signed a two-year, $30 million deal to stay on as host of American Idol.[16] In May 2014, Deadline.com reported that he had signed a one-year deal with the option of another year.[17]

Seacrest is the host of Knock Knock Live, premiering on Fox on Tuesday, July 21, 2015, live at 9pm ET, tape delayed at 9pm PT. Knock Knock Live is a show where celebrities arrive at the door of ordinary people who've done something special and give them a prize. Seacrest is in an L.A. studio while a team of helpers including Kellie Pickler and Ross Mathews will arrive at the front door of people across the United States. “Everyone from David Beckham to Justin Bieber is helping us out on this show,” says Seacrest. “When they answer the door, they're given a challenge. They can win prizes, meet celebrities or have a dream come true.”[23] 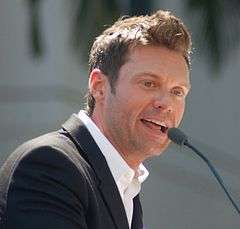 In January 2006, US cable channel E! announced a three-year, $21 million deal for Seacrest to host and produce various programs, including E! News and its red carpet awards show coverages (E!'s signature piece of original programming).[26] That same year, Seacrest launched Ryan Seacrest Productions (RSP); in August 2008, Seacrest named his longtime William Morris Agent, Adam Sher, as CEO.[27] Comcast had first-look rights for all RSP shows through January 2012.[28] Clear Channel acquired a minority stake in RSP in early 2012, but the company no longer has a first look deal with any network.[29]

In April 2012, Seacrest signed a deal with NBCUniversal expanding his on-air role beyond E! to NBC. He contributed to the Today Show, Olympics coverage, entertainment programming, as well as news and other special events. Seacrest will remain managing editor of E! News and host and produce its red carpet awards show coverage.[31]

An Associated Press profile portrayed Seacrest as using both the deal with E! and Dick Clark's New Year's Rockin' Eve as springboards to a long-lasting career in television production and ownership.[32]

Seacrest produces the hit series Keeping Up with the Kardashians, the highest-rated show on the E! network, and the spin-offs Khloe and Lamar, Kourtney and Kim Take New York and Kourtney and Khloe Take Miami. RSP also produced the Emmy Award-winning ABC reality series Jamie Oliver's Food Revolution. RSP also produced two new reality series in 2012 including Melissa and Tye, which aired on CMT and Shahs of Sunset for Bravo. Bravo announced a second season of Shahs of Sunset on April 18, 2012.[33] RSP's new show Married to Jonas premiered on August 19, 2012 on E! and was renewed for a second season.[34][35]

On January 31, 2012, Thomas H. Lee Partners and Bain Capital announced they would invest up to $300M in Ryan Seacrest Media.[36] A consortium headed by Seacrest (with partners AEG and CAA) agreed to rebrand Mark Cuban's HDNet television network as AXS TV.[37]

In April 2010, Seacrest began dating Julianne Hough, a professional dancer, actress, and singer known for participating in Dancing with the Stars.[41][42] On March 15, 2013, it was announced that their relationship had ended.[43] They were dating for over two years before the split.[44]

On May 14, 2016, Seacrest returned to University of Georgia to give advice to alumni and receive an honorary Doctor of Humane Letters degree.[45]