Pocket Books is a division of Simon & Schuster that primarily publishes paperback books.[1][2] 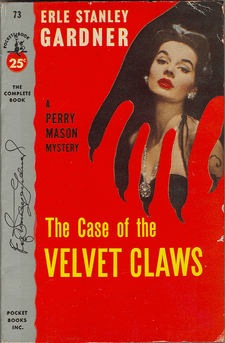 Pocket Books produced the first mass-market, pocket-sized paperback books in America in early 1939 and revolutionized the publishing industry. The German Albatross Books had pioneered the idea of a line of color-coded paperback editions in 1931 under Kurt Enoch; Penguin Books in Britain had refined the idea in 1935 and had 1 million books in print by the following year.

Penguin's success inspired entrepreneur Robert de Graff, who partnered with publishers Simon & Schuster to bring it to the American market. Priced at 25 cents and featuring the logo of Gertrude the kangaroo (named after the mother-in-law of the artist, Frank Lieberman), Pocket Books' editorial policy of reprints of light literature, popular non-fiction, and mysteries was coordinated with its strategy of selling books outside the traditional distribution channels. The format size, and the fact that the books were glued rather than stitched, were cost-cutting innovations.

The first ten numbered Pocket Book titles published in 1939 with a print run of about 10,000 copies each:

The edition of Wuthering Heights hit the best-seller list, and by the end of the first year Pocket Books had sold more than 1.5 million units. Robert de Graff continued to refine his selections with movie tie-ins and greater emphasis on mystery novels, particularly those of Christie and Erle Stanley Gardner.

Pocket and its imitators thrived during World War II because material shortages worked to their advantage. During the war, Pocket sued Avon Books for copyright infringement: among other issues, a New York state court found Pocket did not have an exclusive right to the pocket-sized format (both Pocket and Avon published paperback editions of Leslie Charteris' The Saint mystery series, among others).

In 1981, Dr. Benjamin Spock's "Baby and Child Care" was listed as their top seller having sold 28 million copies at that time and having been acquired in 1946.[4]

Pocket is still known for publishing works of popular fiction based on movies or TV series, such as the Star Trek franchise (owned by corporate sibling CBS Television Studios, while former corporate sibling Paramount Pictures owns film and DVD distribution rights) and formerly Buffy the Vampire Slayer. The author credited for one of the Buffy products is Gertrude Pocket, a reference to the company's kangaroo logo (The Buffy novels are now published by Simon Spotlight Entertainment, another division of Simon & Schuster). Since first obtaining the Star Trek license from Bantam Books in 1979 (with a publication of the novelization of Star Trek: The Motion Picture), Pocket has published hundreds of original and adapted works based upon the franchise. Pocket Books is also the division that currently owns publication rights to the well-known work of James O'Barr, The Crow.