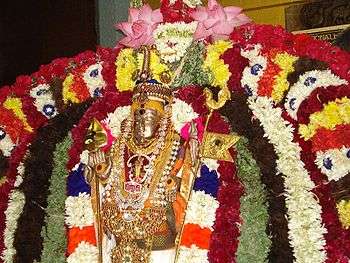 Plan of the song

The song consists of a total of 244 lines, including four introductory lines known as "Kaappu," followed by a couple of meditational lines and the main song portion consisting of 238 lines known as the "Kavacham." The grammar employed in the introductory part is the Naerisai venba and that of the meditational part is the Kural venba, widely known to the Western world for its exclusive usage in Tirukkural. The "Kavacham" part follows the grammar of Nilai Mandila Aasiriyappaa. The plan of the song is as follows:[1]

Sashti is the day that Lord Subramanya defeated the demon Soorapadman. When the devas could not tolerate the evil doings of this demon, they approached the younger son of Lord Shiva and Parvati for his assistance. He fought Soorapadman for six days, at the end of which the Lord vanquished the asura. He threw his weapon at him and split Soorapadman into two halves. One half became a peacock, which he took as his Vahana. The other became a rooster and was transformed into his banner.

The devas rejoiced—they praised the Lord and prayed to him for six days. Devotees usually narrate the Skanda Sashti Kavacham during this period. Whoever fasts and prays to Lord Muruga for the six days of Skanda Sashti is believed to receive Muruga's blessings. Those who are unable to fast all day are permitted to eat once per day during this period.

Devotees believe that regular chanting of this song causes the predicaments of life to be resolved and that chanting the full song 36 times a day brings wealth.