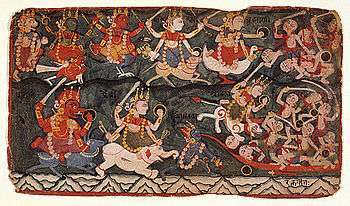 Vahana (Sanskrit: वाहन, Vāhana, literally "that which carries, that which pulls") denotes the being, typically an animal or mythical entity, a particular Hindu deity is said to use as a vehicle. In this capacity, the vahana is often called the deity's "mount". Upon the partnership between the deity and his vahana is woven much iconography and mythology. Deities are often depicted riding (or simply mounted upon) the vahana. Other times, the vahana is depicted at the deity's side or symbolically represented as a divine attribute. The vahana may be considered an accoutrement[1] of the deity: though the vahana may act independently, they are still functionally emblematic or even syntagmatic of their "rider". The deity may be seen sitting or on, or standing on, the vahana. They may be sitting on a small platform called a howdah, or riding on a saddle or bareback.[2] Vah in Sanskrit means to carry or to transport.

However, the vehicle animal also symbolizes the evil forces over which the deity dominates. Mounted on Parvani, Skanda reins in the peacock's vanity. Seated on Mushika, Ganesh crushes useless thoughts, which multiply like rats in the dark. Shani, protector of property, has a vulture, raven or crow in which he represses thieving tendencies. Under Shani's influence, the vahana can make even malevolent events bring hope. 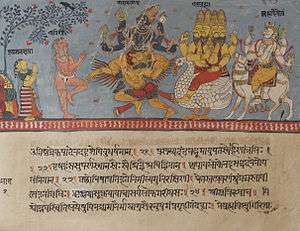 The vehicle of a deity can vary according to the source, the time, and the place. In popular tradition, the origin of each vehicle is told in thousands of different ways. Three examples:

The vahana and deity to which they support are in a reciprocal relationship. Vahana serve and are served in turn by those who engage them. Many vahana may also have divine powers or a divine history of their own. Case in point, the aforementioned Nataraja story, represents a conflation of Hindu gods with local gods, syncretizing their mythos as their territories began to overlap. According to one source, "they could be a synthesis between Vedic deities and autochthonous Dravidian totemic deities.

Compared to other belief systems

The animal correspondences of Hindu vehicles are not consistent with Greek and Roman mythology, or other belief systems which may tie a particular animal to a particular deity. For example, the goddess Lakshmi of the Hindus has elephants, or an owl, or (a rare instance of a non-animal vehicle) the lotus blossom as her vehicle. The goddess Athena of ancient Greece also had an owl as her emblematic familiar, but the meanings invested in the owls by the two different belief systems are not the same, nor are the two goddesses themselves similar, despite their mutual identification with owls.

Lakshmi is, among other things, primarily the goddess of wealth, and her owl is a warning against distrust and isolationism, even selfishness. Athena, though also a goddess of prosperity, is primarily the goddess of wisdom, and her owl symbolizes secret knowledge and scholarship. Perhaps due to their shared geography, the Greco-Roman interpretation is paralleled in Roman Catholic iconography, in which St. Jerome, most famed for editing the New Testament, is often (though not always) depicted with an owl as a symbol of wisdom and scholarship.[3] Depending on the tribe, Native American religious iconography attributes a wide range of attributes to the owl, both positive and negative, as do the Ainu and Russian cultures, but none parallel the Hindu attributes assigned to the owl as Lakshmi's divine vehicle.[4]

Some hold that similar analyses could be performed cross-culturally for any of the other Hindu divine vehicles, and in each case, any parallels with the values assigned to animal totems in other cultures are likely to be either coincidence, or inevitable (as in linking bulls to fertility), rather than evidence of parallel development. In dialectic, this is countered by the retort that each totem or vahana, as an aspect of ishta-devata (or an ishta-devata or asura in its own right), has innumerable ineffable teachings, insights and spiritual wisdom; comparative analysis yields benefit, though knowledge and understanding is not served by collapsing their qualities into homogenous signification.

These correspondences are not always consistent. Ganesh, for example, is sometimes shown with a peacock as his vehicle, although a peacock is the customary vehicle of his brother Skanda (also known as Kartikeya and other names) as well as the vehicle sometimes associated with the goddess Saraswati. Even more rarely, the elephant-bodied Ganesh may be seen riding another elephant, or a lion, or a many-headed serpent.[9]

As the assistant of a deity, the vahana serves the function of doubling his or her powers. Durga the warrior could not have destroyed the demon Mahishasura without the aid of her vehicle, Manashthala the lion. Lakshmi, goddess of fortune, dispenses both material and spiritual riches from her mount, Uluka the owl. Ganesh, remover of obstacles, cannot go everywhere despite his elephant-like strength. However, his vehicle, Mushika the mouse or Ulaka the rat, can slide into the smallest crevice and overcome the greatest obstacles.