Thiruchendur Murugan Temple is an ancient Hindu temple dedicated to Murugan situated in Tamil Nadu, India. The puranic name or historical name for this temple is Jayanthipuram. It is also one of the Arupadaiveedu , the six major abodes of Murugan. It is the only one among the xix sacred temple complexes to be situated near the sea shore.

It is located in the eastern end of the town Thiruchendur in the district of Tuticorin, Tamil Nadu, India. It is 60 km south-east of Tirunelveli, 40 km from Tuticorin and 75 km north-east of Kanyakumari.The temple complex is on the shores of Bay of Bengal.

Early Cankam poetry refer to the Murugan seashore shrine at Tirrucciralaivay, which is thought to refer to the Thiruchendur Temple. The earliest existing inscription at the temple is sated 875 AD, and talks about a Pantiyan called Varekuna Maran. The Murugan temple at Thiruchendur was occupied by the Dutch East India company between the years 1646 to 1648, during the course of their war with the Portuguese. The local people tried during these 2 years to try and free their temple, with several futile attempts. The Dutch finally vacated the temple on orders from the Naik ruler. The Dutch removed some idols when they vacated the temple, which were returned after many negotiations with the Madurai Naikaar in 1651. In 1868, 3 priests led a movement to rebuild the temple, and collected funds for the same. The rebuilt temple was consecrated in 1941. A further gopurram was added and consecrated in 1971. [2]

The temple has a eleven tiered rajagopuram, the gateway tower facing the East. The tower by built by Thiruvaduthurai Adheenam under the aegis of the pontiff Desikamoorthy Swami around 1650. There are three precincts in the temple, with the third precinct on the shore of the Bay of Bengal. The entrance of the temple faces the South and has pillared halls leading to the sanctum. The first hall from the entrance is called the Shanmugha Vilasa Mandapam. There are separate shrines of Valli and Devyani, the consort of Muruga in the second precinct. There are shrines of Viswanatha and Visalakshi on the western side, while a cave on the northern side has the shrine of Valli. The image of the presiding deity, Subramanian Swamy is housed in the sanctum, sported with four hands. The image of the festival deity is sported with six faces and twelve hands. There are eight lingams in the temple, which is believed to have been worshipped by Muruga before waging the war with Surapadma. He is believed to have created a well named Skanda Pushkarni with his spear after the war. The water in the well is believed to possess medicinal properties.[3] 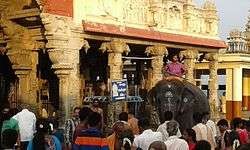 Image of elephant in the temple

Each of the six major abodes of Muruga has an event mentioned in the puranas (major religious texts). Thiruchendur is said to be second in importance among his six abodes. This place is also referred to by other names in religious poems and literature as Thirucheeralaivai, Thiruchenthil, and Thiruchenthiyoor. The deity is worshipped by various names such as Senthilandavan, Senthilkumar, and so on. The six Arupadiveedus are: Palani (120 km west of Madurai), Swamimalai (150 km east of Madurai), Thiruthani (50 km from Chennai), Pazhamudircholai (10 km north of Madurai) and Thiruparamkunram (10 km south of Madurai).[4] The devotees of Muruga emphasize that Thiruvoragam, one of the four Padaiveedu referred to by sage Nakkeerar in his poem Thirumurugattupadai is none other then Kumarakoil, also known as Kumarashetram by Keralites (Malai Nattavar). The temple is situatead in the foothills of Velimalai also known as Velvi Malai, the southern tip of the western ghats. The place is where Muruga married his second consort Valli Devi. The marriage was love marriage called Kandarva Kalyanam. The "thala varalaru" cites numerous names of places, river, water bodies, caves and purana stories in support of this.[5]