For other uses, see Medina (disambiguation). 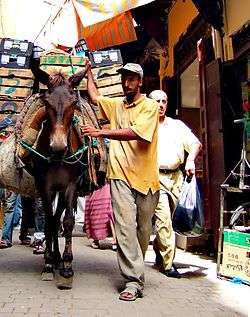 Mule moving goods through the car-free Medina in Fes, Morocco

A medina quarter (Arabic: المدينة القديمة‎‎ al-madīnah al-qadīmah "the old city") is a distinct city section found in many North African cities. The medina is typically walled, with many narrow and maze-like streets.[1] The word "medina" (Arabic: مدينة‎‎ madīnah) itself simply means "city" or "town" in modern-day Arabic.

Because of the very narrow streets, medinas are generally free from car traffic, and in some cases even motorcycle and bicycle traffic. The streets can be less than a metre wide. This makes them unique among highly populated urban centres. The Medina of Fes, or Fes el Bali, is considered one of the largest car-free urban areas in the world.[2] Some medinas were also used to confuse and slow down invaders because of how narrow and winding they are. 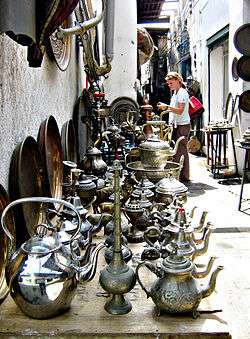 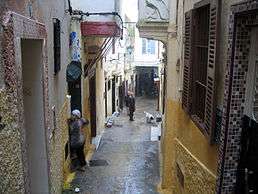