Malachite specimen, showing the original botryoidal form & a polished face of the opposite half of the specimen Mines in the vicinity of Kolwezi supply much of the polishing-grade malachite in the world. 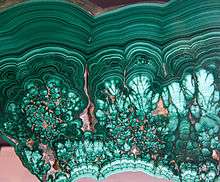 Another spectacular Malachite specimen from Katanga, on display at the Royal Ontario Museum.

Katanga was one of the eleven provinces of the Democratic Republic of the Congo between 1966 and 2015, when it was split into the Tanganyika, Haut-Lomami, Lualaba and Haut-Katanga provinces. Between 1971 and 1997 (during the rule of Mobutu Sese Seko when Congo was known as Zaïre), its official name was Shaba Province.

Katanga's area encompassed 497,000 km2. Farming and ranching are carried out on the Katanga Plateau. The eastern part of the province is considered a rich mining region, which supplies cobalt, copper, tin, radium, uranium, and diamonds. The region's former capital, Lubumbashi, is the second largest city in the Congo.

Copper mining in Katanga dates back over 1,000 years and mines in the region were producing standard sized ingots of copper for international transport by the end of the 1st Millennium AD.[1] In the 1890s the province was beleaguered by Cecil Rhodes from the South (Rhodes colonized Northern Rhodesia) and the Belgian Congo which was owned by King Leopold II. Msiri, the King of Katanga, held out against both but eventually Katanga was subsumed by the Belgian Congo.[2]

In 1960, after the Democratic Republic of the Congo (then called Republic of the Congo) had received independence from Belgium, Katanga attempted to secede from the country. This was supported by Belgium but opposed by the Congolese Prime Minister Lumumba. It led to the Katanga Crisis (or "Congo Crisis") which lasted from 1960 to 1965. The breakaway State of Katanga existed from 1960 to 1963.

Militias such as Mai Mai Kata Katanga led by Gédéon Kyungu Mutanga fought for Katanga to secede and his group briefly took over the provincial capital Lubumbashi in 2013.[3]

Following the implementation of the country's 2005 constitution,[4] in 2015 Katanga Province was split into the provinces of Tanganyika, Haut-Lomami, Lualaba and Haut-Katanga.[5][6]

Copper mining is an important part of the economy of Katanga province.[7] Cobalt mining by individual contractors is also prevalent. There are a number of reasons cited for the discrepancy between the vast mineral wealth of the province and the failure of the wealth to increase the overall standard of living. The local provincial budget was $440 million in 2011.[8][9]

The province formed the Congolese border with Angola and Zambia. The province also bordered Tanzania - although Katanga province and Tanzania did not share a land border - but the border was within Lake Tanganyika. Katanga has a wet and dry season. Rainfall is about 120 cm (49 in).[14]

TESOL, the English Language School of Lubumbashi, is a secondary school that serves the expatriate community. It was founded in 1987 on the grounds of the French School, Lycée Français Blaise Pascal, which suspended operations in 1991 with a new French School starting in 2009.[15]

There are French, Belgian and Greek schools in Lubumbashi sponsored by the respective embassies.

Katanga province has the highest rate of infant mortality in the world, with 184 of 1000 babies born expected to die before the age of five.[16] 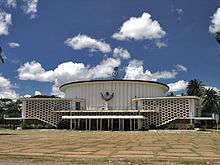