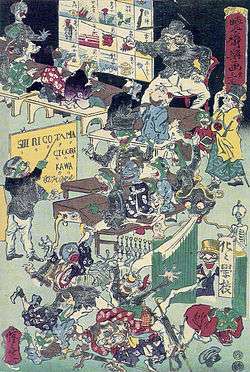 Bake-Bake Gakkō (化々學校), or "School for Spooks", by Kyōsai. In August 1872, the Meiji government decided to implement a system of compulsory education. In this caricature, both demons (above) and kappa (center) are learning vocabulary concerning their daily life. The former are taught by Shōki the demon queller, dressed in western-style uniform. Some goblins try to enter the school (below), but are blown away by the Wind God.
In this Japanese name, the family name is Kawanabe.

Living through the Edo period to the Meiji period, Kyōsai witnessed Japan transform itself from a feudal country into a modern state. Born at Koga, he was the son of a samurai. His first aesthetic shock was at the age of nine when he picked up a human head apart from a corpse in the Kanda river.[3] After working for a short time as a boy with Utagawa Kuniyoshi, he received his artistic training in the Kanō school, but soon abandoned the formal traditions for the greater freedom of the popular school. During the political ferment which produced and followed the revolution of 1867, Kyōsai attained a reputation as a caricaturist. His very long painting on makimono "The battle of the farts" may be seen as a caricature of this ferment. He was arrested three times and imprisoned by the authorities of the shogunate. Soon after the assumption of effective power by the Emperor, a great congress of painters and men of letters was held at which Kyōsai was present. He again expressed his opinion of the new movement in a caricature, which had a great popular success, but also brought him into the hands of the police this time of the opposite party.

Kyōsai is considered by many to be the greatest successor of Hokusai (of whom, however, he was not a pupil), as well as the first political caricaturist of Japan. His work mirrored his life in its wild and undisciplined nature, and occasionally reflected his love of drink. Although he did not possess Hokusai's dignity, power or reticence, he compensated with a fantastic exuberance, which always lent interest to his technically excellent draughtsmanship. 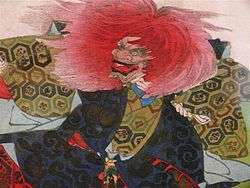 Renjishi (連獅子), or "Dance of a Pair of Lions", by Kyōsai. Renjishi is a famous dance in the Kabuki theatre.

In addition to his caricatures, Kyōsai painted a large number of pictures and sketches, often choosing subjects from the folklore of his country, Nô drama, nature and religion, for example The Temptation of Shaka Niorai or The goddess Kwannon on a dragon (on kakejiku frame)[4] A fine collection of these works is preserved in the British Museum; and there are also good examples in the National Art Library at South Kensington and the Guimet Museum at Paris. The Kawanabe Kyōsai Memorial Museum was established in 1977, located at Warabi, Saitama Prefecture, Japan.

The most important work about Kyōsai's art and life was written by himself: Kyōsai Gadan (暁斎画談), or "Kyōsai's Treatise on Painting", half autobiography and half painting manual. An important contemporary work concerning the artist is Kawanabe Kyōsai-ō den (河鍋暁斎翁伝), or "Biography of the Old Man Kawanabe Kyōsai", by Iijima Kyoshin (飯島虚心). The work was finished in 1899, but published only in 1984.

Many westerners came to visit Kyōsai, and their memoirs about the artist are valuable. The two important ones, both rare, are:

The most updated, and easily available, reference to Kyōsai's life and works in English is:

Informations about him: He died because of gastric cancer, Erwin Bälz wrote about it in his diary. If he was his doctor, or if he was present at Kyōsais death is not mentioned. (Source: Erwin Bälz - Das Leben eines deutschen Arztes im erwachenden Japan, Hrsg. Toku Bälz, 1930)