For other uses, see Kappa (disambiguation).

A kappa (河童, lit. river child), also known as kawatarō (川太郎), komahiki (駒引, lit. horse puller), or kawako (川虎, lit. river tiger), is a yōkai demon or imp found in traditional Japanese folklore.[1][2][3] The name is a combination of the words kawa (river) and wappa, a variant form of 童 warawa (also warabe) "child." In Shintō they are considered to be one of many suijin (水神,“water deity”), their yorishiro, or one of their temporary appearances.[4] A hairy kappa is called a hyōsube (ひょうすべ).[5] In Japanese Buddhism they are considered to be a kind of hungry ogres. Therefore, Sha Wujing, who is a character from the Chinese story Journey to the West is described like a kappa in Japan.[6] Kappa are distinguished for having a small pool of water suspended on top of their head, signifying their life force and habitat.

There are more than eighty other names associated with the kappa in different regions, including kawappa, gawappa, kōgo, mizushi, mizuchi, enkō, kawaso, suitengu, and dangame.[3] Along with the oni and the tengu, the kappa is among the best-known yōkai in Japan.[7][8] These various names of the creature vary by region and local folklore, while the term "kappa" remains the name most well known outside of Japan.

Kappa have been used to warn children of the dangers lurking in rivers and lakes, as kappa have been often said to try to lure people into water and pull them.[6][9]

Kappa legends are said to be based on the Japanese giant salamander or hanzaki, an aggressive salamander that grabs its prey with its powerful jaws.[10] Other theories suggest they are based on historical sightings of the now extinct Japanese river otter as seen from a distance, otters have been known to stand upright and a drunk, frightened or hallucinating person may think they are seeing a humanoid entity and not a wild animal.

The best known place where it has been claimed Kappa supposedly reside is in the Kappabuchi waters of Tōno in the Iwate Prefecture. The nearby Jōkenji Buddhist temple has dedicated a komainu dog statue to honor the kappa, which according to legend helped extinguish the temple's fire.[11] The Kappa is also venerated at the Sogenji Buddhist temple in the Asakusa district of Tokyo where according to tradition, a mummified arm of a Kappa is enshrined within the chapel hall.

The kappa is typically depicted as roughly humanoid in form and about the size of a child. Its scaly reptilian skin ranges in color from green to yellow or blue.[12][13][14] Kappa supposedly inhabit the ponds and rivers of Japan, and have various features to aid them in this environment, such as webbed hands and feet.[15] They are sometimes said to smell like fish and they can swim like them. The expression kappa no kawa nagare ("a kappa drowning in a river") conveys the idea that even experts make mistakes.[16]

Although their appearance varies from region to region, the most consistent features are a beak, a shell, and a plate (sara), a flat hairless region on the top of the head that is always wet, and is regarded as the source of the kappa's power. This cavity must be full whenever a kappa is away from the water; if it ever dries out, the kappa loses its power and may even die.[3][12][13]

Another notable feature in some stories is that the arms are said to be connected to each other through the torso and can slide from one side to the other.[3] While they are primarily water creatures, they do on occasion venture on to land. When they do, the plate can be covered with a metal cap for protection.[9] In fact, in some versions of the legends, kappa spend spring and summer in the water, and the rest of the year in the mountains as Yama-no-Kami (山の神, “mountain gods”).[3] Although they are reported to live throughout Japan, they are often said to be particular to Saga Prefecture.[17] 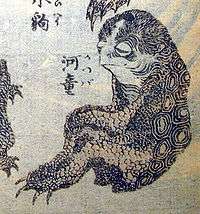 Kappa are usually seen as mischievous troublemakers or trickster figures. Their pranks range from the relatively innocent, such as looking up women's kimonos, to the malevolent, such as drowning people and animals, kidnapping children, raping women and at times eating human flesh. Folk beliefs claim the cucumber as their traditional favorite meal.[9]

As water monsters, kappa have been blamed for drownings, and are often said to try to lure people into water and pull them in with their great skill at wrestling.[9] They are sometimes said to take their victims for the purpose of drinking their blood, eating their livers, or gaining power by taking their shirikodama (尻子玉), a mythical ball said to contain the soul, which is located inside the anus.[9][18][19][20] Even today, signs warning about kappa appear by bodies of water in some Japanese towns and villages.

Kappa are also said to victimize animals, especially horses and cows. The motif of the kappa trying to drown a horse is found all over Japan.[21] In these stories, if a kappa is caught in the act, it can be made to apologize, sometimes in writing.[21] This usually takes place in the stable where the kappa attempted to attack the horse, which is considered the place where the kappa is most vulnerable.[3]

Kappa are also known for raping women. An 18th-century ukiyo-e image by Utamaro depicts a kappa raping an ama diver underwater. In his Tōno Monogatari, Kunio Yanagita records a number of beliefs from the Tōno area about women being accosted and even impregnated by kappa.[22] Their offspring were said to be repulsive to behold, and were generally buried.[22] 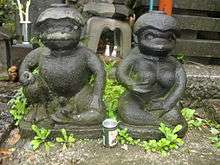 A paired male and female kappa statues at at the Sogenji Buddhist shrine at the Asakusa district in Tokyo.

It was believed that, if one was confronted with a kappa, there were a few means of escape. Kappa are obsessed with politeness, so if a person makes a deep bow, it will return the gesture, the water in the plate on its head spills out and it is rendered unable to leave the bowing position until the plate is refilled with water from the river in which it lives. If a person refills it, the kappa will serve that person for all eternity.[9] A similar weakness of the kappa involves its arms, which can easily be pulled from its body. If an arm is detached, the kappa will perform favors or share knowledge in exchange for its return.[3] Another method of defeat involves shogi or sumo wrestling: a kappa sometimes challenges a human being to wrestle or engage in other tests of skill.[2] This tendency is easily used to encourage the kappa to spill the water from its sara. Kappa also accept challenges put to them, as in the tale of the farmer's daughter who was promised to a kappa in marriage by her father in return for the creature irrigating his land. She challenged it to submerge several gourds in water and, when it failed in its task, it retreated and she was saved from the promised marriage.[3] Kappa have also been driven away using their aversion to variously, iron, sesame, or ginger.[3] 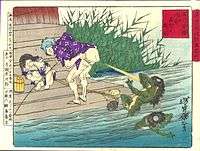 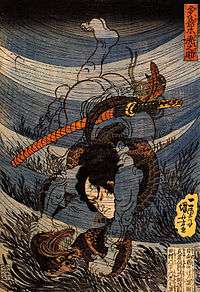 Kappa are not entirely antagonistic to human beings. They are curious about human civilization, and they can understand and speak Japanese. They may even befriend human beings in exchange for gifts or offerings of nasu (茄子, Japanese eggplant), soba (そば or 蕎麦, buckwheat noodles), nattō (なっとう or 納豆, fermented soybeans), or kabocha (カボチャ, 南瓜, winter squash), but especially cucumbers, the only food kappa are known to enjoy more than human children.[3] Japanese parents sometimes write the names of their children, or their own names, on cucumbers and toss them into waters believed to be infested with kappa in order to mollify the creatures and allow the family to bathe.[23] In some regions, it was customary to eat cucumbers before swimming as protection, but in others it was believed that this act would guarantee an attack.[3] There is a cucumber-filled sushi roll known as kappamaki.[9]

Once befriended, kappa may perform any number of tasks for human beings, such as helping farmers irrigate their land. Sometimes, they bring fresh fish, which is regarded as a mark of good fortune for the family that receives it.[3] They are also highly knowledgeable about medicine, and legend states that they taught the art of bone setting to human beings.[9][24][25] Due to these benevolent aspects, some shrines are dedicated to the worship of particularly helpful kappa.[26] There were also festivals meant to placate the kappa in order to obtain a good harvest, some of which still take place today. These festivals generally took place during the two equinoxes of the year, when the kappa traveled from the rivers to the mountains and vice versa.[3]

Kappa may also be tricked into helping people. Their deep sense of decorum prevents them from breaking an oath, for example. 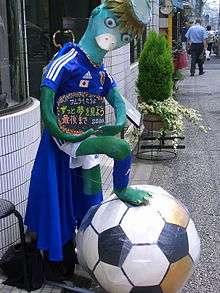 Similar folklore can be found in Asia and Europe. The Japanese folklore creature Kappa is known in Chinese folklore as 水鬼[27] "Shui Gui", Water Ghost, or water monkey and may also be related to the Kelpie of Scotland and the Neck of Scandinavia. Like the Japanese description of the beast, in Chinese and in Scandinavian lore this beast is infamous for kidnapping and drowning people as well as horses. The Siyokoy of the Philippine islands is also known for kidnapping children by the water banks.