Kayqubad I or Alā ad-Dīn Kayqubād bin Kaykāvūs (Persian: علاء الدين كيقباد بن كيكاوس‎‎; Turkish: I. Alâeddin Keykûbad, 1188–1237) was the Seljuq Sultan of Rûm who reigned from 1220 to 1237. He expanded the borders of the sultanate at the expense of his neighbors, particularly the Mengujek Beylik and the Ayyubids, and established a Seljuq presence on the Mediterranean with his acquisition of the port of Kalon Oros, later renamed Ala'iyya in his honor. He also brought the southern Crimea under Turkish control for a brief period as a result of a raid against the Black Sea port of Sudak. The sultan, sometimes styled "Kayqubad the Great", is remembered today for his rich architectural legacy and the brilliant court culture that flourished under his reign.

Kayqubad's reign represented the apogee of Seljuq power and influence in Anatolia, and Kayqubad himself was considered the most illustrious prince of the dynasty. In the period following the mid-13th century Mongol invasion, inhabitants of Anatolia frequently looked back on his reign as a golden age, while the new rulers of the Anatolian beyliks sought to justify their own authority through pedigrees traced to him. 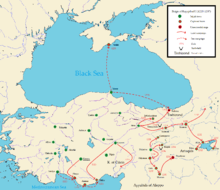 The sultanate expanded considerably during the reign of Kayqubad, mostly in the east.

Kayqubad was the second son of Sultan Kaykhusraw I, who bestowed upon him at an early age the title malik and the governorship of the important central Anatolian town of Tokat. When the sultan died following the battle of Alaşehir in 1211,[1] both Kayqubad and his elder brother Kaykaus struggled for the throne. Kayqubad initially garnered some support among the neighbors of the sultanate: Leo I, the king of Cilician Armenia and Tughrilshah, the brothers' uncle and the independent ruler of Erzurum. Most of the emirs, as the powerful landed aristocracy of the sultanate, supported Kaykaus. Kayqubad was forced to flee to the fortress at Ankara, where he sought aid from the Turkman tribes of Kastamonu. He was soon apprehended and imprisoned by his brother in a fortress in western Anatolia.[2]

Upon Kaykaus' unexpected death in 1219 (or 1220), Kayqubad, released from captivity, succeeded to the throne of the sultanate. 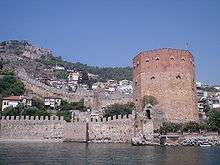 The Kızıl Kule, or Red Tower, built in Alanya by Kayqubad I.

In foreign policy, the Armenian Kingdom of Cilicia was reduced and became a vassal of the sultanate. The sultan settled Turcomans along the Taurus Mountains frontier, in a region later called İçel. At the end of the 13th century, these Turcomans established the Karamanids.

In 1227/1228, Kayqubad advanced into eastern Anatolia, where the arrival of Jalal ad-Din Mingburnu, who was fleeing the destruction of his Khwarezmian Empire by the Mongols, had created an unstable political situation. The sultan defeated the Artuqids and the Ayyubids and absorbed the Mengujek emirate into the sultanate, capturing the fortresses of Hısn Mansur, Kahta, and Çemişgezek along his march. He also put down a revolt by the Empire of Trebizond and, although he fell short of capturing their capital, forced the Komnenos dynasty family to renew their pledges of vassalage.

At first Kayqubad sought an alliance with his Turkish kinsman Jalal ad-Din Mingburnu against the Mongol threat. The alliance could not be achieved, and afterwards Jalal ad-Din took the important fortress at Ahlat. Kayqubad finally defeated him at the Battle of Yassıçimen between Sivas and Erzincan in 1230. After his victory, he advanced further east, establishing Seljuq rule over Erzurum, Ahlat and the region of Lake Van (formerly part of Ayyubids). The Artuqids of Diyarbakır and the Ayyubids of Syria recognized his sovereignty. He also captured a number of fortresses in Georgia, whose queen sued for peace and gave her daughter Tamar in marriage to Kayqubad's son, Kaykhusraw II.[3]

Mindful of the increasing presence and power of the Mongols on the borders of the Sultanate of Rum, he strengthened the defenses and fortresses in his eastern provinces. He died at an early age in 1237, the last of his line to die in independence. 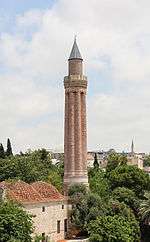 The Yivli Minare Mosque, built in Antalya by Kayqubad I.

Kayqubad had three sons:'Izz al-Din, son of his Ayyubid wife; Rukn al-Din, son of his Ayyubid wife; and Kaykhusraw II, the eldest.[4] Kayqubad originally had his subjects swear allegiance to his son Izz al-Din, but the emirs generally preferred to rally behind the more powerful Kaykhusraw. With no clear successor, conflict broke out between the various factions upon Kayqubad's death.

Kayqubad sponsored a large scale building campaign across Anatolia. Apart from reconstructing towns and fortresses, he built many mosques, medreses, caravanserais, bridges and hospitals, many of which are preserved to this day. Besides completing the construction of the Seljuq Palace in Konya, he also built the Kubadabad Palace on the shore of Lake Beyşehir[5] and Keykubadiye Palace near Kayseri.