This article is about the irredentist concept. For the geographic area, see Syria (region). For other uses, see Syria (disambiguation). 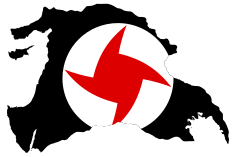 Antun Saadeh's and the SSNP's vision of a unified "natural Syria", corresponding closely to the maximum extent of the Neo-Assyrian Empire (with the exception of Egypt).

Syria defined as the lands ranging from the Taurus mountains in Asia Minor, to the Euphrates, to Sinai, and not including Upper Mesopotamia

The pre-Islamic, Hellenistic name of the region, "Syria", was used by the Ottomans in the Syria Vilayet until the collapse of the Ottoman Empire in 1918. The wave of Arab nationalism in the region evolved towards the creation of a new "Great Syria" over French-governed Occupied Enemy Territory Administration, declared as Hashemite Kingdom on March 1920, claiming extent over the entire Levant. Following the Franco-Syrian War, in July 1920, French armies defeated the newly proclaimed Arab Kingdom of Syria and captured Damascus, aborting the Arab state. The area was consequently partitioned under French and British Mandates into Greater Lebanon, various Syrian states, Mandatory Palestine and Transjordan. The Syrian states were gradually unified as the State of Syria and became the independent Republic of Syria in 1946.

In the most common historical sense, Syria refers to the entire northern Levant, including Alexandretta and the ancient city of Antioch (the pre-Islamic capital of Syria), or in an extended sense the entire Levant as far south as Egypt, but not including Mesopotamia.

Before the Arabs came to "Greater Syria" the people spoke Aramaic, and identified as Arameans. They never were united as one nation in that time, but dived between other empires. Sometimes they had their own country, or province for example Osroene, and Palmyra. Syria is a synonym for Aram. Bilad Al-Sham in the ninth century.

Arab conquest of the Levant in the 7th century gave rise to the Bilad al-Sham province, which functioned under the Caliphates. The province was encompassing much of the region of Syria and became largely overlapping with this concept. Other sources indicate that the term Greater Syria was coined during Ottoman rule, after 1516, to designate the approximate area included in present-day Lebanon, Syria, Jordan, and Israel.[1]

Pan-Syrian nationalism and proposals for unification

In the nationalist ideology developed by the founder of the Syrian Social Nationalist Party, Antoun Saadeh, Syria is seen as the geocultural environment in which the Syrian nation state evolved, an area Sa'adeh called the Syrian Fertile Crescent.

Saadeh rejected both language and religion as defining characteristics of a nation and instead argued that nations develop through the common development of a people inhabiting a specific geographical region. He pointed to what he considered to be the region's distinct natural boundaries, and described it as extending from the Taurus range in the northwest and the Zagros Mountains in the northeast, to the Suez Canal and the Red Sea, including the Sinai Peninsula and the Gulf of Aqaba in the south, and from the eastern Mediterranean Sea including the island of Cyprus in the west, to the arch of the Arabian Desert and the Persian Gulf in the east.

Abdullah I of Jordan had been a proponent of Greater Syria under Hashemite rule, based on the original proposal for a Kingdom of Syria following the Arab Revolt. The Hashemite monarchy of Iraq was also believed to have harboured ambitions of union with Syria. The Ba'athist government of Hafez al-Assad in Syria also pursued the idea of Greater Syria, resulting in its involvement in the Lebanese Civil War and the Syrian Occupation of Lebanon.